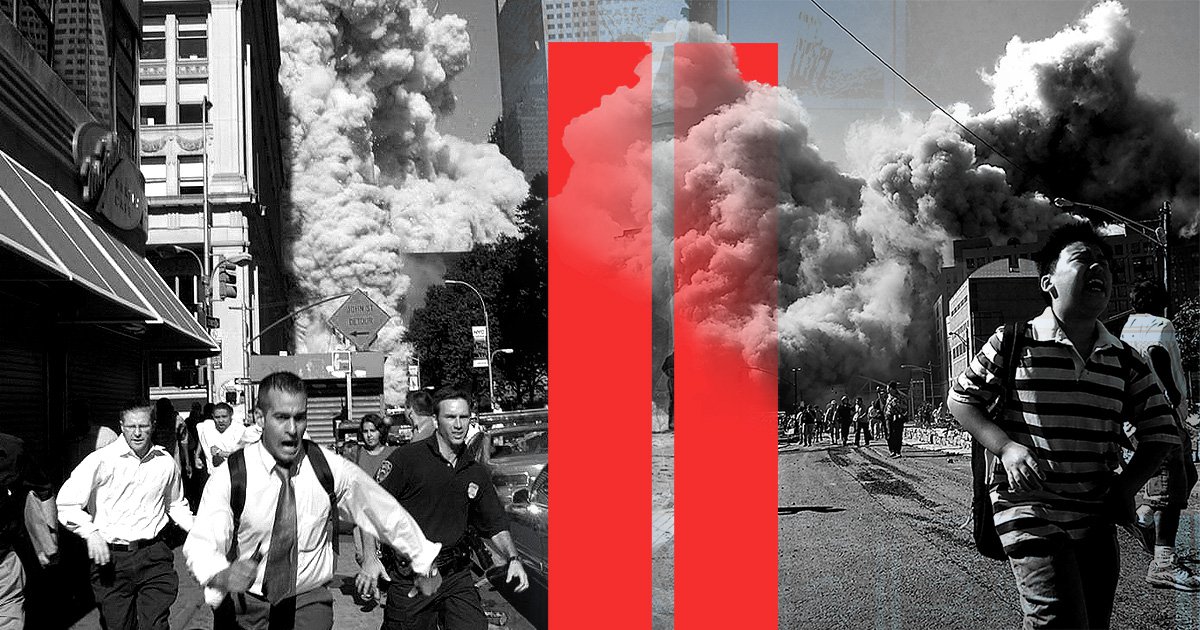 An acclaimed photojournalist has recalled how people were walking around ‘like zombies’ as she captured the apocalyptic scenes at the Twin Towers during 9/11.

Suzanne Plunkett, who was a young photographer covering New York Fashion Week, said ‘it was unlike anything I had ever imagined’ after rushing to the scene shortly after the first plane struck.

At first, she thought it was a ‘fluke’, but the initial scenes of confusion made her realise something monumental had taken place and her first instinct was to take out her camera and shoot.

Suzanne, 51, who now lives in Hertfordshire, spoke as the world prepares to mark the 20th anniversary of 9/11 amid the backdrop of the Western coalition’s Afghanistan withdrawal.

She told Metro.co.uk how she awoke on the morning to her office paging her a ‘911’ emergency services code after American Airlines Flight 11 hit the North Tower at 8.46am.

Living in New York’s East Village at the time, she tried unsuccessfully to call her colleagues at the AP news agency before scrambling to take a train a mile downtown to Manhattan.

Suzanne said: ‘After the office paged me I turned on the TV and saw the plane had hit the first tower, at first I thought it was a fluke and I was thinking about how the fire department would put that out.

‘I raced downtown in newspaper mode, looking for a story.

‘People were yelling things like there were poisonous gases and terrorists around, but I was just in my photojournalist mode, trying to get a picture.’

The photographer was well placed to capture history when the South Tower, which was struck by United Airlines Flight 175, collapsed at 9.59am.

Suzanne, who is now freelance, credits an obstinate police officer for probably saving her life by stopping her as she raced towards the building less than a minute before.

Then, frame by frame, she captured the unfolding disaster.

‘It was unlike anything I had ever imagined,’ Suzanne said.

‘The really strong memory is of this dust cloud coming up. It was a really clear, sunny day and it was like someone had suddenly turned the lights out.

‘This curtain of ash and debris just came flying past me in this “whoosh”.

‘Everything went dark and there was lots of screaming, clatter and confusion, but also people were just deadpan.

‘They were making their way out, their eyes wide and panicked.

‘I was confused and trying to capture the emotion but even though there was terror people were just deadpan. They were walking away barefoot and covered in ash, they were almost like zombies.’

Suzanne’s burst-mode images of people trying to escape the looming dust cloud as it tumbled through the kempt office district captured the shock and bewilderment of those split seconds.

‘I ran into a lobby of an office and everybody was just completely panicked, screaming and crying,’ she said.

‘I tried to comfort a woman before realising that wasn’t my role and running out to take more pictures in what is now Ground Zero.’

Suzanne filed her first pictures on a laptop from a small shop near the scene when the second tower collapsed at 10.28am before heading to an apartment 20 floors up to take overhead pictures.

The terror attack would lead to the US-led invasion of Afghanistan and the ousting of the Taliban, who had harboured Osama bin Laden and Al-Qaeda.

The Americans and British are withdrawing their troops amid desperate scenes at Kabul airport and with the militants having regained power in the country. Suzanne’s post-9/11 assignments would take her into the city where she opened windows into the lives of women and girls emerging from years of repression after the fall of the Taliban.

She spoke to Metro.co.uk as part of the Imperial War Museum’s (IWM) 9/11: Twenty Years On programme, which includes a new photography exhibition and an appeal for people around the world to share their stories to better illustrate and understand the complex, history-shaping chain of events.

Ms Plunkett has donated items from her time covering 9/11 and Afghanistan to the museum’s developing post-2001 collection.

They include the face mask she wore when she was taking photographs at the Twin Towers, documents including leaflets on dealing with post-traumatic stress disorder and a medical check report from the day.

Megan Joyce, a curator in the IWM’s Contemporary Conflict team, said: ‘9/11 is a significant moment in our history. More than 90 countries lost citizens in the attacks including 67 individuals from the UK.

‘It was a direct attack on the US but it also had catastrophic long-term consequences across the globe and impacted communities economically, socially and culturally.

‘That’s why IWM has launched a public appeal inviting people to share their own stories and images and consider how the day has impacted their lives.

‘We want to better understand how 9/11 transformed the world we live in.

‘The aim is to gather stories from around the world and share them on our platform. It’s a great opportunity for members of the public to take part in a global conversation.’

*For more information about the IWM’s 9/11: Twenty Years On programme and the Wim Wenders: Photographing Ground Zero exhibition click here