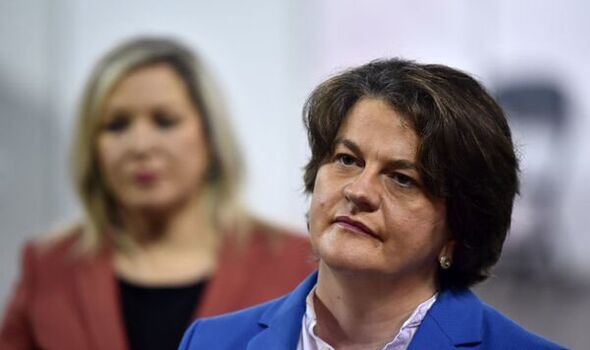 People across Northern Ireland will go to the polls this week in an election which could result in Sinn Fein emerging as the biggest party for the first time and taking the position of First Minister in the Stormont Assembly.

Ms Foster argues that unionist opposition to the protocol – a deal agreed with the EU to avoid the need for a land border in Ireland which is blamed for disrupting trade with Great Britain – is so intense that is unlikely that unionists will return to share power Sinn Fein until it is overhauled.

When asked what message she had for Mr Johnson she said it was “to get on with it” because “if you want devolution to come back then you are going to have to do something around the protocol”.

She wants Whitehall to renegotiate the protocol and warns that unionists will not be able to return to power-sharing in the Northern Ireland executive “for as long as the protocol is in the current status”.

It is reported that the UK Government has drawn up plans for legislation which would allow ministers to turn off some of the most contentious parts of the protocol and end the need for border checks on goods arriving from Great Britain.

Exclusive polling by Techne found 61 percent of UK respondents would “support a new law to protect Northern Ireland as a full part of the United Kingdom” with only 21 percent opposed.

Ms Foster, who led the DUP from 2015 to 2021, said a lot of smaller businesses in Great Britain have stopped exporting to Northern Ireland because “they don’t think it’s worth the hassle because of the paperwork”.

For Ms Foster and her fellow unionists, the constitutional issues raised by the protocol are also crucial.

She said: “[Those] of us who are unionists want to be in the same position as the rest of the United Kingdom, obviously. We value and cherish our unionism and the UK very much and we feel it is under threat from the protocol.”

A further concern is the impact on wider society in Northern Ireland.

She said: “You’ll see protests [and] therefore that causes problems inbetween the communities which is not good as well.”

For similar reasons she opposes a referendum on unifying with the Republic of Ireland.

She said: “Everybody in the UK knows referendums are very divisive because of the Yes/No situation, so that will then cause continued division in Northern Ireland which I don’t think is helpful for the good of the people in Northern Ireland, frankly.

We don’t need to be entering discussions about a border poll when it’s clear that the majority of people want to stay within the United Kingdom.”