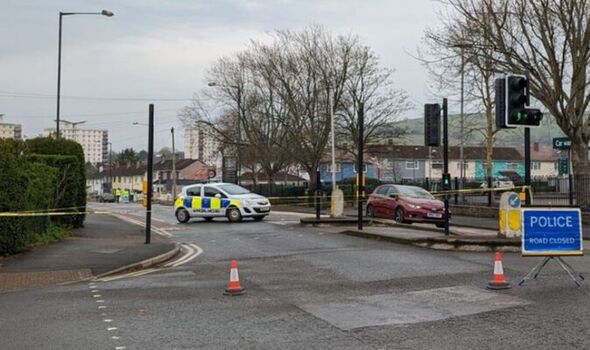 The incident is believed to relate to the sound of suspected gunshots overnight.

According to a local news outlet, the incident happened in Hareclive Road in the Hatcliffe area of Bristol.

A tweet by the local radio station read: “Gunshots have been fired in the Hartcliffe area of Bristol.

“It happened at 9.40pm last night in Hareclive Road.

“Avon and Somerset Police tell us those involved fled the area and it’s unknown if anyone was injured.

“Cordons remain in place at Hareclive Road and Newland Road.”

First Bus tweeted just after 7.30 am this morning that Hareclive Road in Hartcliffe is shut and that a bus service is being diverted as a result of this.

It tweeted: “Hareclive Road, Hartcliffe, Bristol, is closed due to a police incident.

Avon and Somerset Police said officers, including armed ones, were deployed to Hareclive Road in Hartcliffe at 9.40 pm last night. The police helicopter was also called to the scene.

In a statement, the force said those involved in the incident are reported to have fled the area immediately.

Cordons are currently in place on Hareclive Road and Newland Road while officers are also examining a car.

The police statement read in full: “Shortly after 9.40 pm last night we received multiple calls about a firearm being discharged in the Hareclive Road area of Bristol.

“Officers, including armed officers, were immediately deployed to the scene and the police helicopter was asked to lift from its base in South Wales.

“Those involved in the incident are reported to have fled the area immediately after the firearm was discharged and it is currently unclear whether anyone has been injured.

“Members of the public can expect an increased police presence in the area as we seek to locate those involved and establish what happened.

“As part of our investigation house to house and CCTV enquires are underway.

“Cordons are currently in place on Hareclive Road and Newland Road while officers are also examining a car.

“Anyone with information is asked to phone 101 and provide the call handler with the reference 522073769.”

Avon and Somerset Police have been contacted to ascertain any further information.