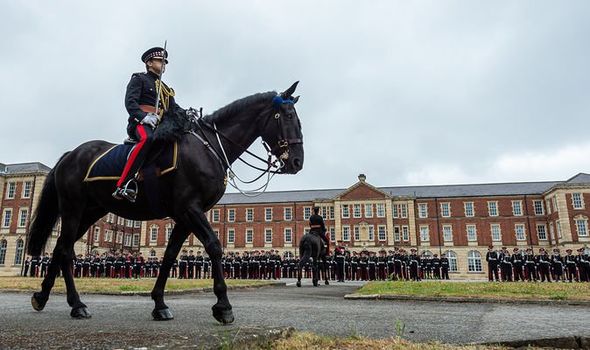 The woman – who wished not to be named – alleged that she was casually advised by one male cadet that “all women in the army are sluts”. Another cadet sat next to the first agreed, she claimed.

“Like the rest of the army, it’s a toxic environment that needs dragging out of the dark ages,” she told the Times.

She went onto claim: “I’ve never been to a dinner where I’ve not been groped.”

Another retired female major she knew was groped by a commanding officer in front of her partner at a Royal Artillery dinner, she said.

It comes as seven officers and soldiers could face prosecution over the suicide of Sandhurst cadet Olivia Perks.

The Service Prosecuting Authority (SPA) is considering charges against Sandhurst staff for failing in their duty to protect Ms Perks, who was said to be a known suicide risk.

Ms Perks allegedly had an affair with an instructor at the military academy, and was understood to have feared disciplinary action.

According to the paper, the young cadet spent the night with a colour sergeant after he invited her to his room at the end of a drinking session.

She was still wearing a ball gown from the previous evening’s formal event when she left his room in the morning, and walked past colleagues.

The colour sergeant was demoted and removed from Sandhurst. Another soldier was also alleged to have had an affair with Perks.

Details of the circumstances of her death will be in an army report to be released this year, and an inquest is due to take place next year.

Sources told the Times in October that “issues were being swept under the carpet to protect reputations”.

The retired lieutenant colonel, who described events at military dinners she had witnessed, said that back when she was there women were known as STPs – which stood for “squat to piss”.

An army spokesman said: “We categorically do not tolerate any behaviour that marginalises anyone in our workforce.

“When allegations are made they are thoroughly investigated and, where misconduct has been proven, the appropriate disciplinary action is taken.”

Defence sources insisted to the Times that reforms over the years had consigned this behaviour to history.

Military sources at the academy recently said there was still a “general feel coming from the instructors and cadets that it was a pretty horrible place to be”.

A deluge of allegations concerning “conduct and culture” in the army have led Defence Secretary Ben Wallace to “summon” the army board this week.

The board includes General Sir Mark Carleton-Smith, head of the army, and thirteen other permanent members.

The army said that Mr Wallace was determined to work with the top brass to “drive out unacceptable behaviour at all levels, particularly with respect to the treatment of women”.

In November 2020, he lifted a gagging order on servicewomen so that they could come forward with evidence of abuses of power in the military to the defence select sub-committee inquire into the matter.

The inquiry received written testimony from 4,000 women – which amounts to around 40 percent of those still serving in the armed forces.