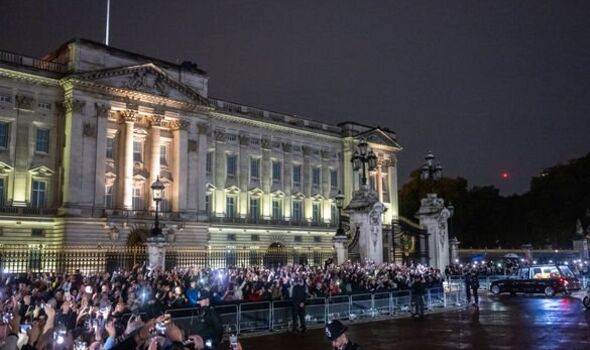 People have 24-hour access to the Lying-in-State in London from 5pm today until 6.30am on Monday, the day of her funeral.

Assuming mourners will pass through Westminster Hall at the rate of more than 50 every minute, officials believe around 400,000 will be able to file past the coffin over four-and-a-half days.

But between 750,000 and one million people may be prepared to queue – meaning many may never make it.

The Government last night unveiled the five-mile queue for which people must wear wristbands.

It stretches south along the Thames, across Lambeth Bridge and on to the Albert Embankment. From there, it will pass behind the London Eye on to the South Bank and past the National Theatre, Tate Modern and HMS Belfast, round to Southwark Park.

There are separate plans for those less able to queue, such as people using wheelchairs.

Despite warnings the average wait could take 35 hours, some were already bedding down on pavements, hoping to secure good places.

The Department of Culture Media and Sport (DCMS), responsible for Operation Feather to control the queues, said everyone would have an airport-style security search before entering the Palace of Westminster.

A coloured and numbered wristband will be issued at the back of the queue, providing a record of when people joined it. However, it does not guarantee entry to the Lying-in-State.

The DCMS added: “Wristbands are specific to each person joining the queue and are strictly non-transferable.

“You must keep this wristband on at all times as it will be checked along the route. Your wristband also allows you to leave the queue for a short period to use a toilet or get refreshments, then return to your place.”

It added: “The accessible route will begin at Tate Britain, where timed entry slots will be issued. Guide dogs, hearing dogs and other official assistance dogs, will be permitted in Westminster Hall. British Sign Language interpreters will be available.”

More than 1,000 volunteers, stewards and Metropolitan Police officers will be on hand and there will be toilets and water fountains along the route.

Cafes and other local businesses are also expected to open and the BFI will be showing archive footage of the Queen and her reign on an outdoor screen. More than 100 Scouts will join volunteers from the Samaritans to offer help if needed.

Inside the Palace of Westminster, the coffin will be raised on a catafalque and draped in the Royal Standard, with the Orb and Sceptre placed on top.

It will be guarded around the clock by units from the Sovereign’s Bodyguard, the Household Division or Yeoman Warders of the Tower of London.

The Government said people should be silent inside the Palace and urged mourners to “dress appropriately”. Clothes with “political or offensive slogans” are banned.

Queue-jumpers and anyone drunk will be ejected by stewards and police.

There are also tight restrictions on what can be taken into the Palace. Only one small bag with a simple opening or zip is permitted and items like flowers, tributes, candles, flags, photos, or folding chairs are not allowed.

The guidance warned: “Please note that the queue is expected to be very long. You will need to stand for many hours, possibly overnight, with very little opportunity to sit down, as the queue will keep moving.”

Flasks or water bottles, except clear water ones, must be emptied before the security search point.