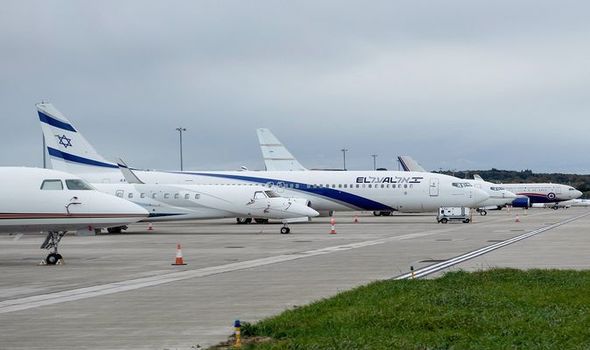 Up to 400 are believed to have flown into Glasgow and Edinburgh in the past three days, and one estimate put the total level of CO2 generated at 13,000 tonnes. A private jet can pump out two tonnes of CO2 per hour, while the average Briton generates 5.62 tonnes of CO2 in a whole year. Amazon boss Jeff Bezos’ £48million Gulf Stream was among the planes seen flying in, while US president Joe Biden landed at Edinburgh Airport in Air Force One, accompanied by three other planes and the helicopter Marine One.

A long motorcade that crossed Scotland’s Central Belt took him to the Glasgow summit – and overall, his visit to the event is expected to generate one tonne of CO2. The

Prime Minister is flying back to London in his own private jet today, his spokesman confirmed.

Labour MP Nadia Whittome tweeted: “A private jet produces 10 times the emissions per person as an economy class flight. World leaders used 400 private jets for COP26, emitting as much CO2 as 1,600 Scottish people do a year.”

Better Transport’s Alice Ridley said: “Leaders must set an example by taking the low-carbon train where possible and commercial flights when necessary. Private jets are a luxury the planet can’t afford.”