I was 11 years old at the time and I was visiting my home country, Somalia, after moving to England around the age of three. It translates to: ‘Look at what the foreigner is wearing’.

I was in a full-length animal print maxi dress and hijab, but there was nothing outwardly ‘inappropriate’ about the outfit I got from New Look before I flew over. It was just different.

That was the first time I realised I didn’t quite fit in while in Somalia – and one of many times I’d reconcile that I was different in the UK too.

My mother, my grandmother and I moved to the UK when I was three to escape the outbreak of the Somali civil war in 1991.

My grandfather was the mayor of a district in Somalia in the 1980s, meaning that my mother grew up in an upper middle-class household with servants, private tutors and drivers. My family name is still synonymous with that prestige it had back home.

The expectation of many Somalis was that the war would be over in a couple of months – their relocation temporary. Though we have made significant steps in the right direction, the war is yet to be declared over.

I don’t really have any memories from before I moved, which means my first recollections are all from the two-bedroom Leicester council estate where I have spent the majority of my life.

One of my fondest memories is of the day that my mother returned home from the hospital after giving birth to my baby brother. I was on the potty with my grandmother standing over me, waiting to wash me when the doorbell rang. With my potty forgotten, I ran to the door to greet my mother and this little person who changed our lives forever – all without trousers on.

I also remember around the age of six, my grandmother going back to Somalia and telling me that she missed ‘home’ and that if she were to pass, that was where she wanted it to be – among her people.

If I was pressed to describe where home is, it would be that poorly-maintained flat.

We’d go back to Somalia regularly during my childhood and I’d always look forward to the freedom we felt we had to be children there. Everywhere was sand and stray goats to play among until evening. 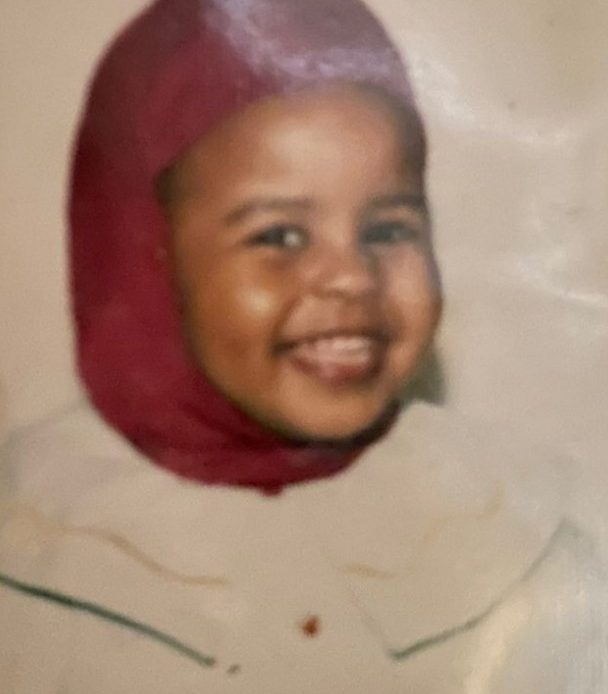 Then the town would come alive at night, and we would watch our grandmother meet people of all walks of life over firelight. But most importantly, we would love to just be in our grandmother’s presence.

It was the third or fourth trip back home that the incident of being called a ‘foreigner’ happened.

This trip in particular was even more special because that year it had coincided with Eid, meaning that we could – for the first time in years – spend it with my grandmother who had previously joined us in the UK but had gone back to Somalia after just three years.

Seeing her was so special. She slipped me some money and said to me at the time: ‘Dadkaaga ina barato ayaa kuu roon, Hooyo. Raac ina adeerta oo soo arag dalkaga. Soo Eid’ (which means: ‘It is vital for you to connect with your people, my child. Go with your cousin and see your country. Go out and enjoy your Eid’)

So I walked with my family through the main street by the Masjid near our house, watching some boys play a ball game and wishing desperately that I could go play with them. Outside, the street was filling up with people coming out of prayers.

That’s when I was called a ‘foreigner’ and I don’t think that I had ever felt truly rejected until that moment. I cried the entire way back home, and was inconsolable until my mother and grandmother bought me a cake to distract me from what had happened.

It never, ever left me though.

It is hard to put into words what it feels like to be demonised as an outsider in the very place that you were born. I share a language with those boys who mocked me for my otherness – a faith and a history, too.

It is a social purgatory growing up as a Somali immigrant in Europe.

Your perceived ‘cadaanimo’ (whiteness) from your life in the West ostracises you among the very Somalis that you share a heritage with. You travel back to the place of your people and expect a homecoming; you are instead met with sideways glances and patronising comments about your grammar.

It is a heart-breaking revelation to those of us who were either too young to remember what this famed ‘home’ was like, or who had never seen the infamous motherland for themselves – born second-generation and even further removed from their country.

Unfortunately, this sense of otherness is something I’ve felt in the UK too.

After one of our summer trips to visit my grandmother in Somalia, I came back to England and attended my year three non-school uniform day in a gorgeous baby blue dress embossed with the white stars of our flag that she had gifted me.

I excitedly queued up outside the classroom to start the day but that excitement was short lived, as one of my classmates shouted, ‘Freshie!’ – a derogatory term insinuating someone who is not only an outsider, who is too ‘fresh’ off the boat – and was met with giggles.

It’s funny; these two incidents are almost symmetrical in their othering of me, but they took place thousands of miles apart, by two different groups that I felt connected to.

The alienation of Somalis in the UK is one that is infuriatingly common – from the incessant Abdi jokes and pirate slurs that were hurled at us growing up.

Is it any surprise that so many of us feel like we are emotional nomads, ungrounded with no true home?

The next time you encounter someone who you do not understand or whose difference is glaringly obvious, do not revert to the base instinct to distance them further. Remember that these immigrants that you see on TV have dreams and aspirations, fears and desires – just like you.

Understand that it is only out of necessity that these people chose to remove themselves from not only home, but of a natural belonging.

Being a Somali-Brit has brought with it more confusion and soul-searching than I had been prepared to do.

But I wouldn’t change my identity for the world.