PARIS — On a recent afternoon, the Rue de Rivoli looked like this: Cyclists blowing through red lights in two directions. Delivery bike riders fixating on their cellphones. Electric scooters careening across lanes. Jaywalkers and nervous pedestrians scrambling as if in a video game.

Sarah Famery, a 20-year resident of the Marais neighborhood, braced for the tumult. She looked left, then right, then left and right again before venturing into a crosswalk, only to break into a rant-laden sprint as two cyclists came within inches of grazing her.

“It’s chaos!” exclaimed Ms. Famery, shaking a fist at the swarm of bikes that have displaced cars on the Rue de Rivoli ever since it was remade into a multilane highway for cyclists last year. “Politicians want to make Paris a cycling city, but no one is following any rules,” she said. “It’s becoming risky just to cross the street!” 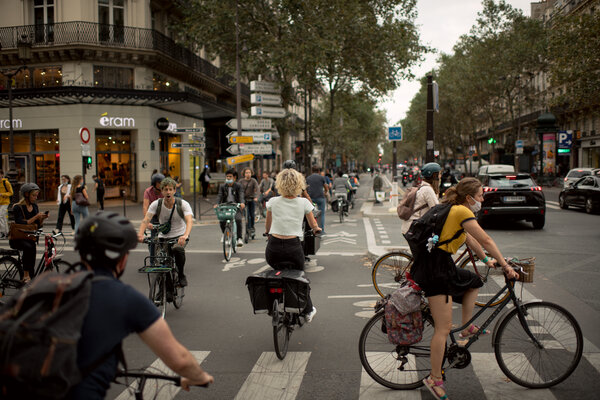 The mayhem on Rue de Rivoli — a major traffic artery stretching from the Bastille past the Louvre to the Place de la Concorde — is playing out on streets across Paris as the authorities pursue an ambitious goal of making the city a European cycling capital by 2024.

Mayor Anne Hidalgo, who is campaigning for the French presidency, has been burnishing her credentials as an ecologically minded Socialist candidate. She has earned admirers and enemies alike with a bold program to transform greater Paris into the world’s leading environmentally sustainable metropolis, reclaiming vast swaths of the city from cars for parks, pedestrians and a Copenhagen-style cycling revolution.

She has made highways along the Seine car-free and last year, during coronavirus lockdowns, oversaw the creation of over 100 miles of new bike paths. She plans to limit cars in 2022 in the heart of the city, along half of the Right Bank and through the Boulevard Saint Germain.

Parisians have heeded the call: A million people in a metropolis of 10 million are now pedaling daily. And Paris now ranks among the world’s top 10 cycling cities,

But with success has come major growing pains.

“It’s like Paris is in anarchy,” said Jean-Conrad LeMaitre, a former banker who was out for a stroll recently along the Rue de Rivoli. “We need to reduce pollution and improve the environment,” he said. “But everyone is just doing as they please. There are no police, no fines, no training and no respect.”

At City Hall, the people in charge of the transformation acknowledged the need for solutions to the flaring tensions, and to the accidents and even deaths that have resulted from the free-for-all on the streets. Anger over reckless electric scooter use in particular boiled over after a 31-year-old woman was killed this summer in a hit-and-run along the Seine.

“We are in the midst of a new era where bikes and pedestrians are at the heart of a policy to fight climate change,” said David Belliard, Paris’s deputy mayor for transportation and the point person overseeing the metamorphosis. “But it’s only recently that people started using bikes en masse, and it will take time to adapt.”

Mr. Belliard hopes Parisians can be coaxed into complying with laws, in part by adding more police to hand out 135 euro fines ($158) to unruly cyclists and by teaching school children about bike safety. Electric scooters have been restricted to a speed of 10 kilometers an hour (just over 6 m.p.h.) in crowded areas, and could be banned by the end of 2022 if dangerous use doesn’t stop.

The city also plans talks with delivery companies like Uber Eats, whose couriers are paid per delivery and are some of the biggest offenders when it comes to breaking traffic rules. “Their economic model is part of the problem,” Mr. Belliard said.

Probably the biggest challenge, though, is that Paris doesn’t yet have an ingrained cycling culture.

The abiding French sense of “liberté” is on display in the streets at all hours, where Parisians young and old jaywalk at nearly every opportunity. They appear to have carried that freewheeling spirit to their bikes.

Copenhagen — the model that Paris aspires to — has efficient layouts for cycling paths that allow bikes, pedestrians and cars to coexist within a hierarchy of space. Citizens are taught from a young age to follow rules of the road.

In Paris, parts of the 1,000-kilometer citywide cycling network (about 620 miles) can steer bikers into hazardous interactions with cars, pedestrians and other cyclists. At the Bastille, a once-enormous traffic circle that was partly appropriated from cars, a tangle of bike lanes weave through traffic. Cyclists who respect signals can take up to four minutes to cross.

“Paris has the right ideas and they’re absolutely the main city to watch on the planet, because no one is near them for their general urban transformation visions,” said Mikael Colville-Andersen, a Copenhagen-based urban designer who advises cities on integrating cycling into urban transport. 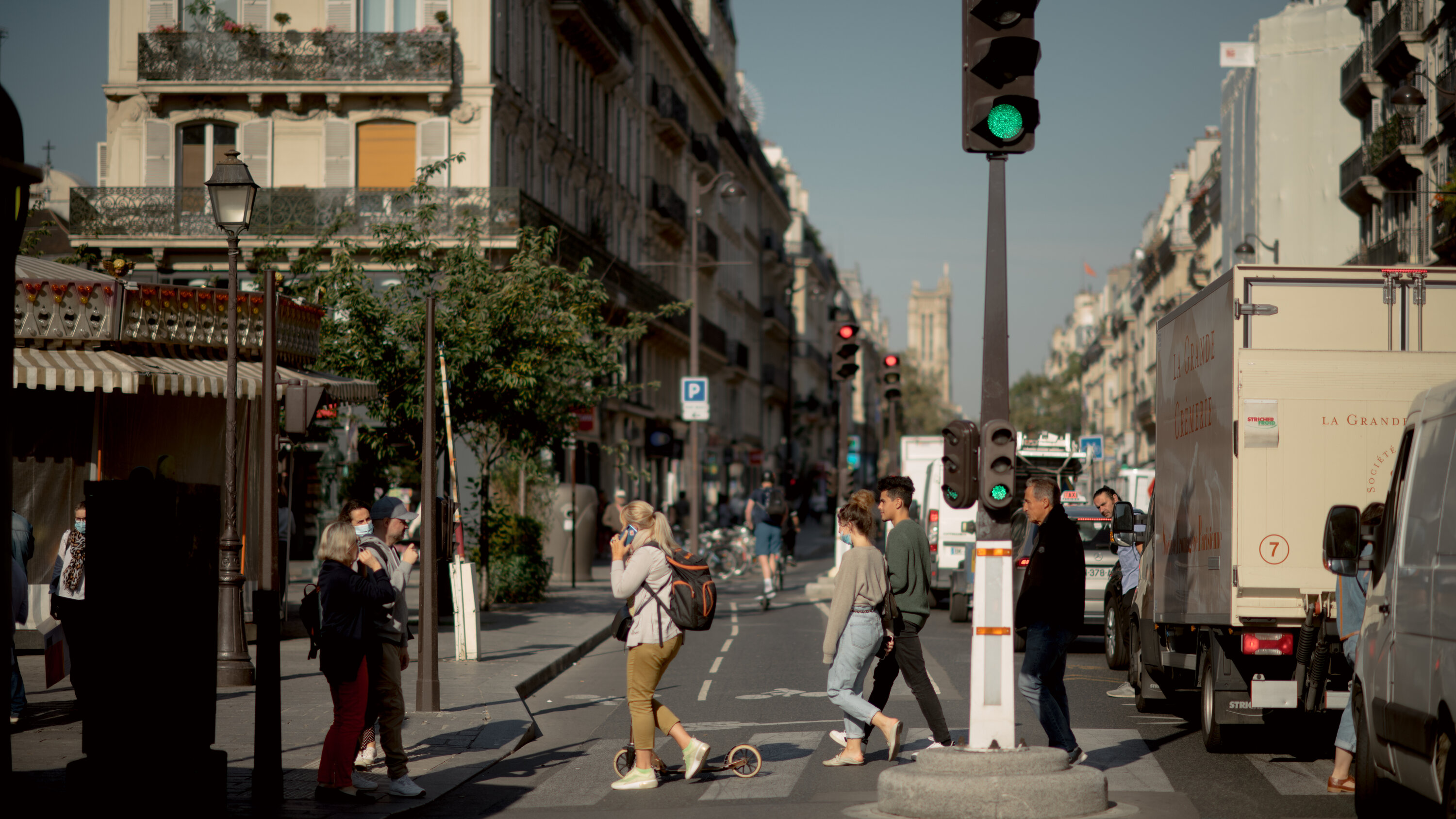 “But the infrastructure is like spaghetti,” he continued. “It’s chaotic, it doesn’t connect up and there’s no cohesive network. If you can get that right, it will eliminate a lot of confusion.”

Mr. Belliard, the deputy mayor, said Paris would soon unveil a blueprint to improve infrastructure. But for now, the tumult continues. On a recent afternoon, eight cyclists ran a red light en masse on the Boulevard de Sébastopol, a major north-south artery. Wary pedestrians cowered until one dared to try crossing, causing a near pileup.

Back on the Rue de Rivoli, cyclists swerved to avoid pedestrians playing a game of chicken with oncoming bikes. “Pay attention!” a cyclist in a red safety vest and goggles shouted at three women crossing against a red light, as he nearly crashed in the rain.

Cyclists say Paris hasn’t done enough to make bike commuting safe. Bike accidents jumped 35 percent last year, from 2019. Paris en Selle, a cycling organization, has held protests calling for road security after several cyclists were killed in collisions with motorists, including, recently, a 2-year-old boy riding with his father who was killed near the Louvre when a truck turned into them.

A small but growing number of cyclists say they’re too nervous to ride anymore.

“I’m afraid of being crushed,” said Paul Michel Casabelle, 44, a superintendent at the Maison de Danmark, a Danish cultural institute.

On a recent Sunday, Ingrid Juratowitch had to talk her daughter Saskia safely across bike lanes near the Saint Paul metro station while she held her two other young daughters at a safe distance from the street.

“Be careful, there are bikes coming from the left and right,” said Ms. Juratowitch, who has lived in Paris for 14 years. She is increasingly reluctant to let her children walk to school for fear of reckless riders. “There’s another one coming. OK, now you can go!”

“From an environmental point of view, we don’t want to see the city go back to cars,” Ms. Juratowitch said. “But it’s not safe. It’s as if bikes and pedestrians don’t know how to coexist.”

Saskia, 12, chimed in. “It’s not the bikes, it’s the bikers,” she said. “They think the rules apply to everyone except them.”