As health officials warn of a second major wave, growing numbers of people are dismissing the threat as media hype and sometimes embracing conspiracy theories. 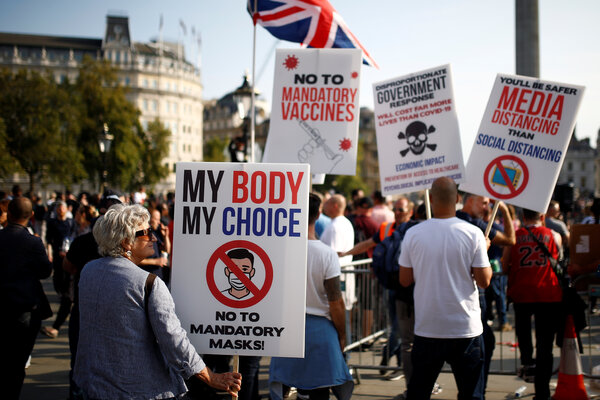 LONDON — Alongside a strip of candy-colored houses on London’s Portobello Road, a freshly scrawled message blared out from the older graffiti on a garage door: “Take off your mask!”

The sentiment echoed that of thousands of unmasked protesters who packed Trafalgar Square in the center of the city on Saturday, and a week earlier, rallying against Britain’s coronavirus restrictions, with many calling the pandemic a hoax.

“No more lies, no more masks, no more lockdown,” one sign read.

In Berlin, Brussels, Dublin and Paris, similar gatherings have gone ahead in recent weeks as coronavirus cases are again rising across much of Europe. But with health experts warning that a second wave has already arrived in some places and with many governments moving to reintroduce restrictions, the ranks of those dismissing the dangers of the virus and others calling it a government-led hoax have swelled.

Daniel Jolley, a senior lecturer in psychology at Northumbria University and an expert in conspiracy theories, said the emergence of a growing, vocal contingent of people who believed governments were not being truthful about the pandemic was unsurprising.

“People are drawn to conspiracy theories in times of crisis,” Mr. Jolley said. “When there is something happening — a virus outbreak, rapid political change, the death of a celebrity, a terrorist attack — it breeds conspiracy theories.”

The prolonged nature of the pandemic and the prospect of a new round of government restrictions, he believes, have only deepened that distrust and potentially spurred on the naysayers.

“People are trying to understand the world in which we live,” he said, whether or not that explanation is rooted in reality. “But when you have this belief, you hold on to it, and you ascribe to evidence that supports your viewpoint.” 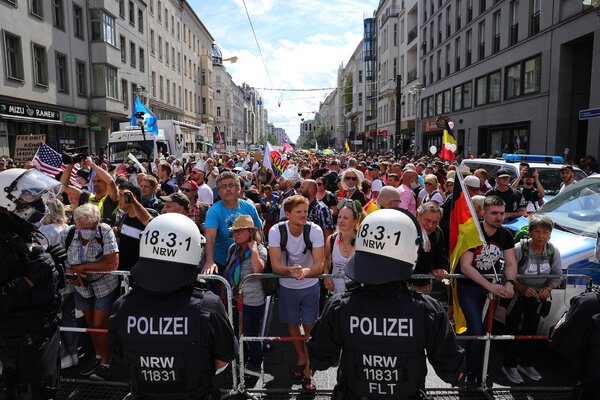 This was the mentality on display at recent protests against the coronavirus restrictions that have popped up in cities across Europe, which have at times turned violent. On Saturday, at least four police officers were injured in clashes in Trafalgar Square.

At another protest in the square a week earlier, Kate Shemirani — a nurse placed on an interim suspension by Britain’s Nursing Council this summer after complaints about her claims that the coronavirus is fake or linked to 5G mobile networks, and about her outspoken anti-vaccine stance — told the crowd: “They want you all wearing a mask, there’s no science behind that mask. That mask is going to make you sick.”