LONDON — Beset by declining ratings, upheaval in its on-air ranks and a multibillion-dollar defamation suit related to its election coverage, Fox News is staggering out of the Trump era — blamed by many for seeding the poisonous political culture that brought a violent mob into the halls of the United States Capitol.

Yet in Britain, where television news is regulated to avoid political bias, Rupert Murdoch and a competing group of investors are seizing this moment to create two upstart news services that will challenge the BBC and other broadcasters by borrowing heavily from Mr. Murdoch’s Fox playbook.

If the timing for a pair of brash, right-wing news outlets seems strange given Fox’s recent travails in the United States, it is no less odd in Britain. With the country finally out of the European Union, its bitter political divisions over Brexit have been pushed aside, at least for now, by the grim ordeal of the coronavirus pandemic.

Though these ventures are in competition, they share Murdoch DNA.

Mr. Murdoch’s entrant, the less ambitious of the two, hopes to exploit what its executives see as a gap in the British market for edgy commentary and personality-driven programs. The rival venture — GB News, which has different backers but is stocked with veterans of the Murdoch empire — calculates there is an audience for a channel that rejects what it views as the left-leaning political correctness of the BBC.

“British news broadcasting is pretty much a one-party state,” said Andrew Neil, who is the chairman of GB News and will host a prime-time show. “They all come at stories from various shades of left.”

Pronouncements like that set off alarm bells for some British commentators. While Britain has long had a freewheeling, unabashedly partisan newspaper industry, critics say the last thing it needs after Brexit is a Fox-like news channel — one that could sow further divisions and open the door to the kinds of conspiracy theories nurtured by President Donald J. Trump, and amplified by Fox.

“Imagine being the country that has watched the last four years unfold in the U.S., with its bloodlines so easily traceable to the Fox sensibility, and is nonetheless thinking: let’s have a bit of that,” wrote Marina Hyde, a columnist at the left-leaning Guardian newspaper. “Because that’s us, of course.”

“I would be so happy if @bt_uk would seriously consider the implications of advertising with such a potentially dangerous channel,” Carol Wilkie, of North Yorkshire, wrote in a typical tweet.

Mr. Neil struck back at what he called the “woke warriors,” pointing out that they were trying to cancel a channel that had yet to air a single program. GB News, he said, would cover issues from the “center, perhaps the center right” — not the hard-right approach of Fox. Its shows will offer diverse voices and stick to the facts, he insisted. Unlike Fox or BBC, GB News will not air rolling news coverage.

A combative broadcaster who until last year hosted a prime-time talk show on the BBC, Mr. Neil is famous for his forensic questioning of politicians. Prime Minister Boris Johnson declined to appear on the show during the 2019 election, drawing japes that he was scared of Mr. Neil.

“You can’t take Fox News to this market and give it a British accent,” said Mr. Neil, who once worked for Mr. Murdoch as editor of The Sunday Times of London. “It just doesn’t work.”

Mr. Murdoch did, in fact, bring Fox to Britain with unhappy results. The broadcasting regulator censured it in 2017 for twice violating impartiality standards: Sean Hannity’s coverage of Mr. Trump’s ban on people from majority-Muslim countries and Tucker Carlson’s coverage of a terrorist attack in Manchester.

Executives at Mr. Murdoch’s venture, known as News UK TV, declined to be interviewed. But privately, they, too, play down comparisons to Fox. Unlike GB News, which is an old-fashioned broadcasting channel, Mr. Murdoch is planning a less costly streaming service, akin to Netflix or Now TV, to take advantage of that growing market. 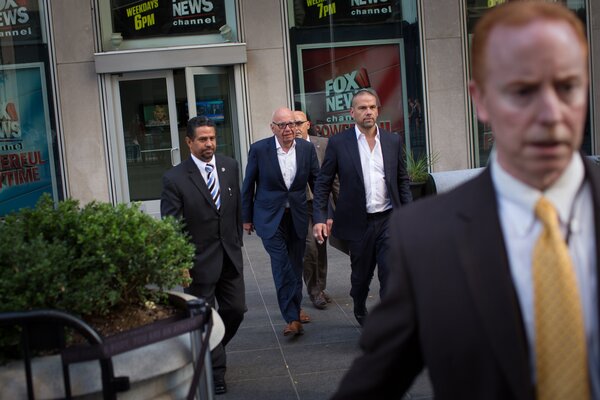 The service, which is to begin a low-key rollout in April, will promote Mr. Murdoch’s stable of British media properties, from The Sun, a mass-market tabloid, and The Times, an upmarket broadsheet, to Talk Radio, which offers Rush Limbaugh-style commentary. All skew to the right.

News UK TV will also skip breaking news coverage and feature shows with politically opinionated voices. But it is punching up the lighter side in its publicity. The first announced show, “News to Me,” will be hosted by Gordon Smart, a Scottish-born rock music aficionado who worked for The Sun.

Mr. Murdoch, 89, who has spent much of the last year sheltering from the pandemic at his 18th-century estate in Oxfordshire, recruited David Rhodes, a former president of Fox News and CBS News, to start the service.

Mr. Rhodes, whose younger brother, Benjamin J. Rhodes, was a senior adviser to President Barack Obama, has been in a lively talent war with GB News to lure marquee names like the broadcaster Piers Morgan.

News UK TV obtained a broadcasting license, and executives said its programming would stay within the regulatory “guardrails.” But critics of the Australian-born Mr. Murdoch said he had entered other markets, including Australia, with similar reassurances, only to make the channels more politically extreme over time.

“Murdoch will say anything and do anything to win regulatory approval, and then do the reverse in practice,” Kevin Rudd, a former prime minister of Australia and outspoken critic of Mr. Murdoch, said in an interview.

“He has followed this formula to the letter in Australia,” Mr. Rudd said. “It will be the identical formula he will use in the United Kingdom.”

Critics also worry about how rigorously Britain’s regulator, known as Ofcom, will enforce the rules on impartiality. Mr. Johnson is said to be considering Paul Dacre as its next chairman. A longtime editor of The Daily Mail, Mr. Dacre is a staunch Brexiteer with a history of opposing restrictions on journalists.

Moreover, said Stuart Purvis, a former broadcaster who oversaw content and standards at Ofcom, “the British devotion to impartiality is based in large part on a hunch. It isn’t an equal time provision.” Broadcasters are allowed “to deliver opinions based on informed knowledge,” he said, provided there is a rough balance between left and right.

Even if these new services tilt to the right, some journalists say there is little to fear, so long as they avoid spreading false news — accusations that led a voting technology company, Smartmatic, to file a $2.7 billion lawsuit against Fox and three anchors, Maria Bartiromo, Lou Dobbs and Jeanine Pirro.

“It is at least plausible to argue that the BBC is seen as being institutionally left of center,” said Simon Jenkins, a columnist for The Guardian. “To that extent, it is plausible to say there is room for something that is right of center.”

The BBC’s reputation did suffer during Brexit, with critics saying it gave too much time to those who opposed leaving the European Union. But it has rebounded during the pandemic, its round-the-clock coverage helping to unite the country.

Politically, too, right-wing news may have missed its moment. After Mr. Johnson won a landslide victory, his Conservative allies began a campaign to strip the BBC of its public funding. But the health crisis has taken much of the air out of those efforts.

“These ventures were always planned for a time when the BBC’s grip on the news agenda would have been loosened, if not diminished,” said Claire Enders, a London-based media analyst. “Things have changed radically.”

Once the pandemic recedes, some media experts predict that the culture-war battles that divided Britons during Brexit will resurface. If immigration and populism are less resonant, new tempests will erupt over issues like “woke” culture, a term that Mr. Neil brandished in his defense of GB News.

“We’re seeing the politics of resentment, which are often driven by older white men who are right wing,” said Rasmus Kleis Nielsen, director of the Reuters Institute for the Study of Journalism at the University of Oxford. He added, “It is a market that is well-served in print and online already.”

Mr. Murdoch seems aware of those realities. After his stretch in Britain during the pandemic, media executives say he has shifted his focus to the United States, where he is busy trying to fix the problems at Fox.