BAYONNE, France — The government in Paris disapproves. But the local mayor doesn’t care. He says he will continue sheltering the Africans crossing the Spanish border into France.

For Jean-René Etchegaray, mayor of Bayonne, a quiet and refined city in the French Basque Country, 22 miles from the border, it is a matter of necessity and humanitarian obligation.

Since Italy all but closed its borders to migrants and France has tried to close its border to migrants coming from Italy, Spain has become the prime gateway into Europe for migrants from Africa, with more than 57,000 arriving last year.

Many are now crossing into France and transiting through Bayonne, a place where “everything is reasonable,” Stendhal wrote in the mid-19th century. 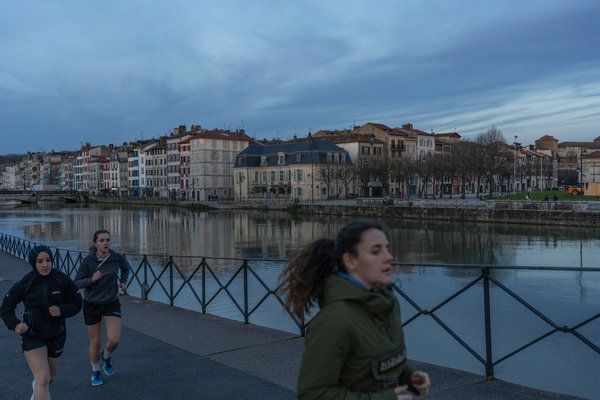 But what Mr. Etchegaray sees as his reasonable stance has put him at war with the government of President Emmanuel Macron, even as the mayor has become a case study in the front-line management of Europe’s migration crisis and its contradictions.

The mayor doesn’t necessarily want these young men, predominantly from French-speaking West African countries like Guinea, Mali and Ivory Coast, hanging around forever. He also doesn’t want them camping out on his streets of tall, old, half-timbered Basque houses nestled along slow-moving rivers.

But he wants the migrants to exist, while in his city, in a “condition of dignity,” as he put it. “I don’t think I can do less,” he said.

So Mr. Etchegaray took the young men off the streets, requisitioned an old military barracks near the train station, put camp beds in it, brought in hot meals and keeps the place heated.

The young men greet him warmly when he shows up, several times a day.

“Good man,” said one of his temporary guests, Abdul Sylla, a 29-year-old from Guinea who harbors vague hopes of studying. “Close to the people.”

Official France keeps wagging its finger at the city’s mayor.

It is “absolutely out of the question” that the state “would give the slightest aid” to the mayor’s shelter, Gilbert Payet, who until recently was Mr. Macron’s regional representative for the Interior Ministry, testily told local reporters last month.

The mayor was unfazed.

“I saw that the frontiers were closing, and as far as I’m concerned, there are some fundamental rights that can’t be trampled on,” Mr. Etchegaray said, evoking Bayonne’s heritage as a refuge for Jews fleeing the Spanish Inquisition and as the birthplace of the great Jewish jurist René Cassin, who helped draft the Universal Declaration of Human Rights.

The French state’s attitude toward the mayor illustrates Mr. Macron’s own ambiguities on the subject of migration.

On the one hand, he has exalted France’s humanitarian traditions and asked the police to treat migrants with fairness.

On the other, his government has refused admission to migrant ships, put migrant rights advocates on trial and boasted about how many foreigners have been expelled or turned back at frontiers.

The Italians have angrily accused the French of hypocrisy, and Mr. Etchegaray has used the same word.

But the mayor merely carried on — distributing blankets; inquiring about the migrants’ well-being; and paying for the center out of the budget of the local agglomeration of towns which he runs.

“They said, ‘You’re just going to create a pull factor for even more migrants,’ ” Mr. Etchegaray said with a laugh during an interview in his office here this past week.

“They said, ‘You’re going to create another Calais,’ ” he said, referring to squalid encampments in northern France, since demolished, where thousands of migrants waited in mud, cold and misery, hoping to get to England.

So far, it hasn’t turned out that way.

“Look, I’m not some kind of radical crazy person,” he continued, noting that most migrants stay a few days then move on.

He even moved a bus stop for low-cost travel services in front of the shelter, to make it easier for migrants to leave. And he went to war with the bus company because its drivers were demanding, illegally, that the Africans produce identity papers.

“We are the only squatters in France supported by City Hall,” Ms. Etcheverry said, grinning.

“That mayor, he’s in deep against the prefect, and visibly against the interior minister,” said Ms. Etcheverry, a law student. “It’s really kind of extraordinary.”

A self-described “radical pro-Basque independence leftist,” she has found herself in political opposition to the 66-year-old center-right mayor before. Not this time.

The migrants come and go at the center all day, most often arriving in inconspicuous cars with traffickers. The local police say the seedy district around the train station in the nearby Spanish border city of Irún has become a hive of trafficking.

One recent day, a group of six young African men with backpacks hurried in single file across a plaza in Irún and down a flight of stairs.

They were bundled into a waiting car that quickly drove off. Watching from the plaza above were several spotters talking furtively into their phones. All of it happened right under the noses of a group of Spanish police officers 20 yards away who did not stir.

French and Spanish officers wait on opposite sides of a bridge crossing the river that separates Spain and France in this corner. The border is open, unless you are a migrant — in which case you might get stopped, checked and sent back.

If the migrants make it to the shelter in Bayonne, however, they have a temporary refuge.

The local police do not enter the courtyard that was converted into the shelter, where a long, low hall is staffed with volunteers and stocked with donations of food and clothing. The young men staying there play scrabble or lie quietly on camp beds, grateful that the worst seems behind them.

“I never want to see the sea again,” said Ibrahima Doumbia, a young Guinean who crossed the Mediterranean by boat. “I had the fright of my life.”

With the arrival of cold weather in the fall, he knew the growing migrant population in Bayonne could no longer stay in one of the city’s main squares, where people had been camping out.

“It was cold and raining,’’ Mr. Etchegaray said. ‘‘We couldn’t leave them there anymore. They were cold, sick and hungry.”

The mayor formed plans for the initiative quickly. “He came directly to the square,” Ms. Etcheverry recalled, adding that she remembered him saying, “I’ll be back in a half-hour.”

When he returned, he led volunteers and migrants to an underground parking lot for the municipal police — a temporary solution until something better could be found.

“He accompanied them, and showed them where the toilets were,’’ Ms. Etcheverry recounted. ‘‘He saw that they were quiet, and that we were just young people helping other young people. But we never imagined that it would end like this, in a center financed by the municipality.”

It is a mayor’s duty, Mr. Etchegaray said.