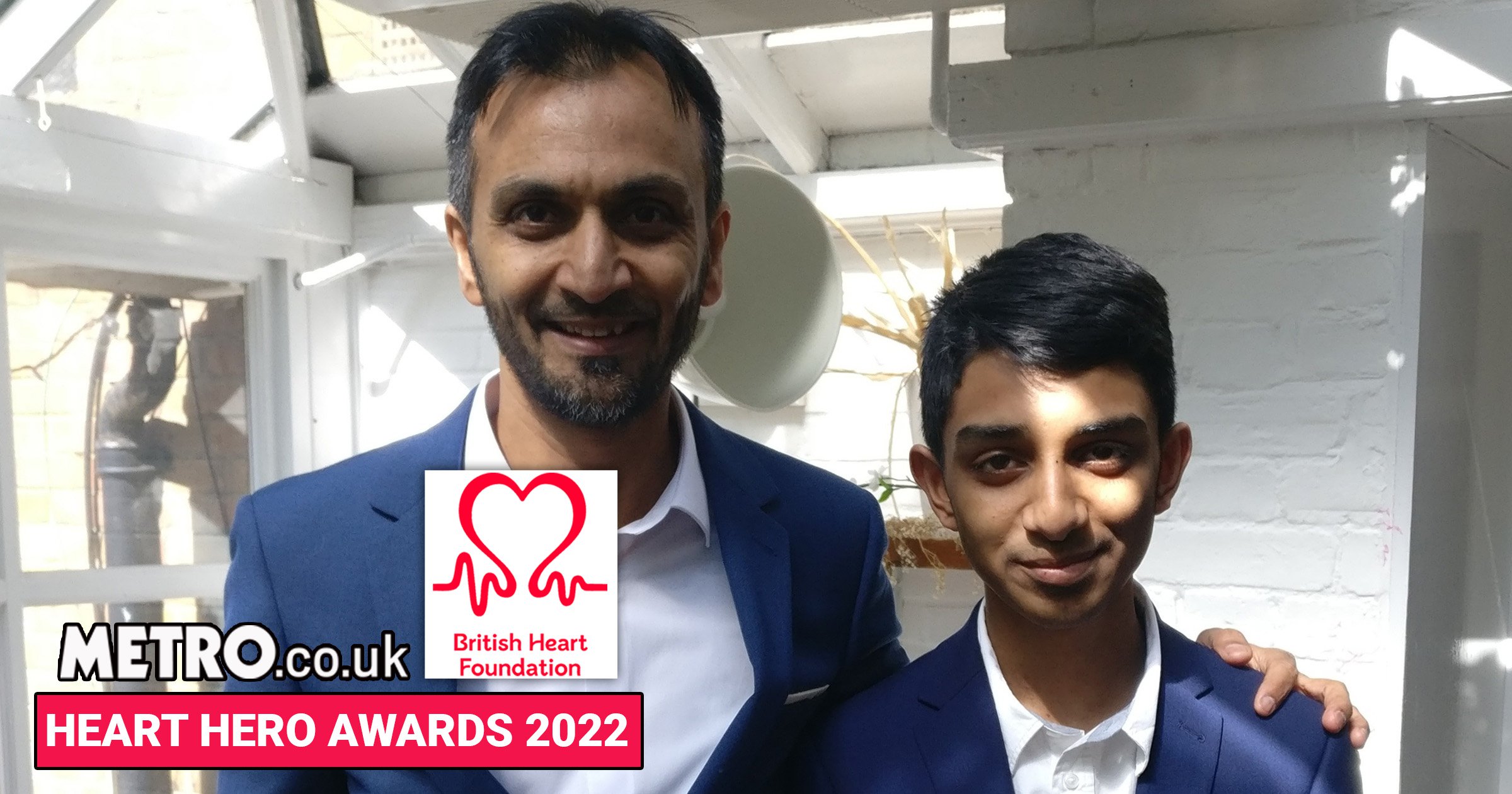 A son wants to become a doctor after saving his dad’s life when he suddenly collapsed from a cardiac arrest.

Dad-of-four Raheel Solkar, 49, told Metro.co.uk how he was diagnosed with colon cancer in March 2021 and started chemotherapy soon after.

He was in the middle of his third cycle of treatment on Saturday, September 11 last year when he ‘slumped on the sofa and started gasping for air’ – which he doesn’t remember.

Raheel’s son Adam, now 19 but was just 18 at the time, sprang into action alongside his brother Imran, now 16, as soon as he realised something was wrong.

‘My memory of that day is that it was all a bit of a shock and scramble at first,’ the Londoner told Metro.co.uk.

‘Imran and I were in the kitchen when suddenly our cousin Zak came running in shouting that dad had collapsed.

‘Imran immediately rang 999 while we were both trying to see if he was still breathing. Once we realised he wasn’t breathing Imran told the call handler on the phone, who told him to start CPR.

‘He did that for about a minute then I took over. All I could think was, “This has happened, and this is what I have to do now”.

‘I tried not to think that this was my dad, I knew I just needed to get on with it. I didn’t realise how long I had been doing CPR until my mum told me afterwards that it was 15 minutes.

‘It felt like two minutes… it all felt so quick, and I was just on autopilot. When I was doing CPR dad took one deep breath it felt like but didn’t breathe out again.

‘It wasn’t until the ambulance arrived and the paramedics shocked him with the defibrillator that his heart started.

‘I’m just so glad I was there at the time. Things could have been so different because last year I was considering doing my gap year abroad and so I wonder what would have happened if I hadn’t been here.’

Raheel was rushed to Barts Hospital in central London, where they put him in a medically induced coma and carried out tests to work out what caused him to go into cardiac arrest.

‘When I found out what Adam had done when I collapsed and that he’d literally saved my life it was unbelievable,’ the IT worker said.

‘The doctor explained to me that if Adam hadn’t started CPR immediately there was a chance I may have died or suffered brain damage.

‘Thanks to him doing CPR for so long he kept the blood pumping to my brain. There are no words for me to thank him for what he did. I didn’t really know how to express my gratitude and what I thought of what he did, but I just kept impressing on him that it was a big deal and I’m here because of him.

‘He’s like me and very unemotional about things and said he just did what needed to be done… He doesn’t show his emotions, but he seems to be coping well.’

Frustratingly doctors couldn’t work out the reason why Raheel went into cardiac arrest, but he had an implantable cardioverter defibrillator (ICD) inserted to ensure if his heartbeat ever becomes abnormal again, it will be shocked back into a normal rhythm.

He has completed his cancer treatment and is currently waiting back to hear if he needs any more.

Raheel’s wife and Adam’s mum Sumaiya, a teacher, said: ‘It’s still very raw for me and I still get very emotional talking about because I was there watching my son literally save his dad’s life.

‘But I want to talk about what he did because I am just so proud of Adam and grateful.

‘I only work a couple of minutes away so when I arrived Adam was just focused on the CPR and trying to save his dad.

‘But although I know how to do CPR Adam could see I was traumatised and in shock. He was amazing and just told me, “Mum just stand aside and let me do this”.

Symptoms of a cardiac arrest

According to the British Heart Foundation, a cardiac arrest usually happens without warning. If someone is in cardiac arrest, they collapse suddenly and:

Without immediate treatment or medical attention, the person will die. If you see someone having a cardiac arrest, phone 999 immediately and start CPR.

You can use the charity’s free digital training tool to learn how to do CPR in 15 minutes here.

‘He was so calm and collected, he wasn’t panicking or crying he was just in the zone. Adam was just incredible.

‘Words can’t express how proud we are of him, even though he doesn’t want to make a big deal out of it. But it was a very big deal. I was in total awe of him.’

The family hopes Adam, who is currently working at North Middlesex Hospital in its haematology labs on his gap year, will be able to pursue his dream of studying medicine at university.

Adam added: ‘I’ve always been into science and want to help people at the same time, so I want to become a doctor.

‘I think this experience has made me want it even more and realise more that I would be suited to it because I could be calm in the most stressful situations.

‘I’ve applied to several universities to study medicine and am hoping to hear back soon. Fingers crossed.’

Raheel, who is also dad to 12-year-old Aysha and five-year-old Ismaeel, said he ‘really wanted to do something to recognise what Adam has done for me and our family’, so nominated him for a Heart Hero Award for 2022.

‘I still don’t think he realises exactly what he did so I want people to know because it could inspire others to learn CPR and save a life too,’ the dad added.

The awards, run annually by the British Heart Foundation, is now entering its fifth year and Metro.co.uk is its media partner for 2022’s event.

This year will mark a return to a live event after two years of being held online due to the coronavirus pandemic and will be hosted by Vernon Kay.

Scottish footballer Scott Allan and TV and radio presenter Will Njobvu are among this year’s celebrity judges.

Winners and nominees from different walks of life and from every part of the UK will be celebrated, and will include remarkable fundraisers and heroic individuals who stepped up to save the life of a stranger using CPR.

The awards ceremony raises awareness of the continued need for funding for the pioneering research that is turning science fiction into reality, and providing hope for more than seven million people in the UK living with heart and circulatory conditions.

How to nominate someone for a Heart Hero Award

A Heart Hero can be anyone from a healthcare professional doing exceptional work, to a young person living with heart disease that has shown incredible courage and determination, to an inspiring fundraiser who has found creative ways to help fund our research.

Those shortlisted will be invited to an awards ceremony in London on Thursday, December 1, when the winners will be announced.

There are eight categories you can vote for including Young Heart Hero, CPR Hero and Innovative Fundraiser.

To find out more about the categories or to make a nomination, visit the British Heart Foundation website.