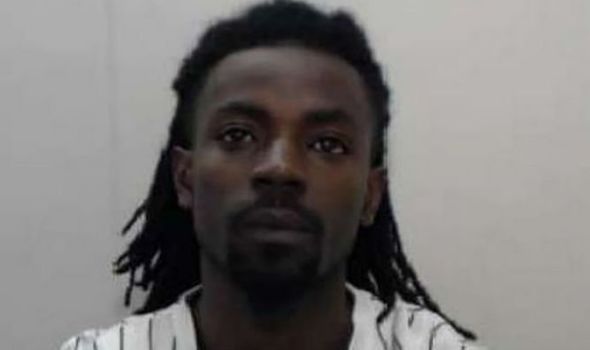 Ali-Yahya Horoun, 28, was sentenced to six years and nine months in jail, and will be deported after serving half of the term. The sex fiend had been staying at an asylum seekers refuge when the victim visited the address.

A court heard how the woman had fallen asleep on a sofa after she and friends spent the afternoon drinking together.

Horoun, who had never met the woman before, entered the room and tried to communicate with the victim. CCTV showed Horoun stroke her head, position himself on top of her and pull down her leggings and knickers.

But the victim’s friend woke just as Horoun put his hand into his trousers, Manchester Evening News reports.

Police were called to the address in Rochdale, Greater Manchester, and Horoun was later arrested.

The predator was sentenced at Minshull Street Crown Court on Wednesday after a jury convicted him.

Sentencing the thug, Judge Andrea Neild said: “The victim has put together a victim statement that could on itself be used to describe the sort of feelings almost every victim of an offence of this type expresses before the court.

“The most startling feature, and I don’t believe I have seen before is that you were caught on CCTV.

“The court, the jury, they had the dubious benefit of watching what happened to this vulnerable woman played out in graphic detail before them.

“She was vulnerable because she was asleep. She believed herself to be unconscious.

“It really matters not what her state was, she was at that time incapable of giving any form of consent.

“The arrogance of this case is illustrated by the fact that you knew there was CCTV and yet you behaved in a way the jury found that you did.”

One of the things that has affected me the most was that I was unconscious and woke up to find him on top of me and violating me. I felt I would be better off dead. I don’t know how to cope with it because it never should have happened to me.

Horoun, who has a three-year-old daughter, denied rape and said that the victim had been awake at the time.

But Helena Williams, prosecuting, said: “The defendant then positions himself on top of her.

“The footage goes on and he can be seen pulling at her leggings. She is not taking part in this.

“He pulled down her leggings and then pulled at her knickers. He can then be seen to put his hand into his trousers.”

A jury found no evidence that penetration had taken place.

In a moving statement read to the court, the victim said she had been living in a women’s refuge at the time of the attack, after escaping an abusive relationship.

She said: “On the night I was attacked I was just going for some drinks. I thought I was safe and with friends.

“Since that night I can’t help feeling like I was set up to be attacked.

“One of the things that has affected me the most was that I was unconscious and woke up to find him on top of me and violating me.

“I felt I would be better off dead. I don’t know how to cope with it because it never should have happened to me.

“I am happy that the jury found him guilty but that doesn’t change what he did to me.

“I am the one who has the life sentence and have to live with the fact that someone tried to rape me.”

Adam Roxborough, defending, told the court his client will be automatically deported after serving his sentence.

He added: “He knows that a significant custodial sentence will follow but the consequence of that will be deportation and the loss of contact with his three-year-old daughter.”