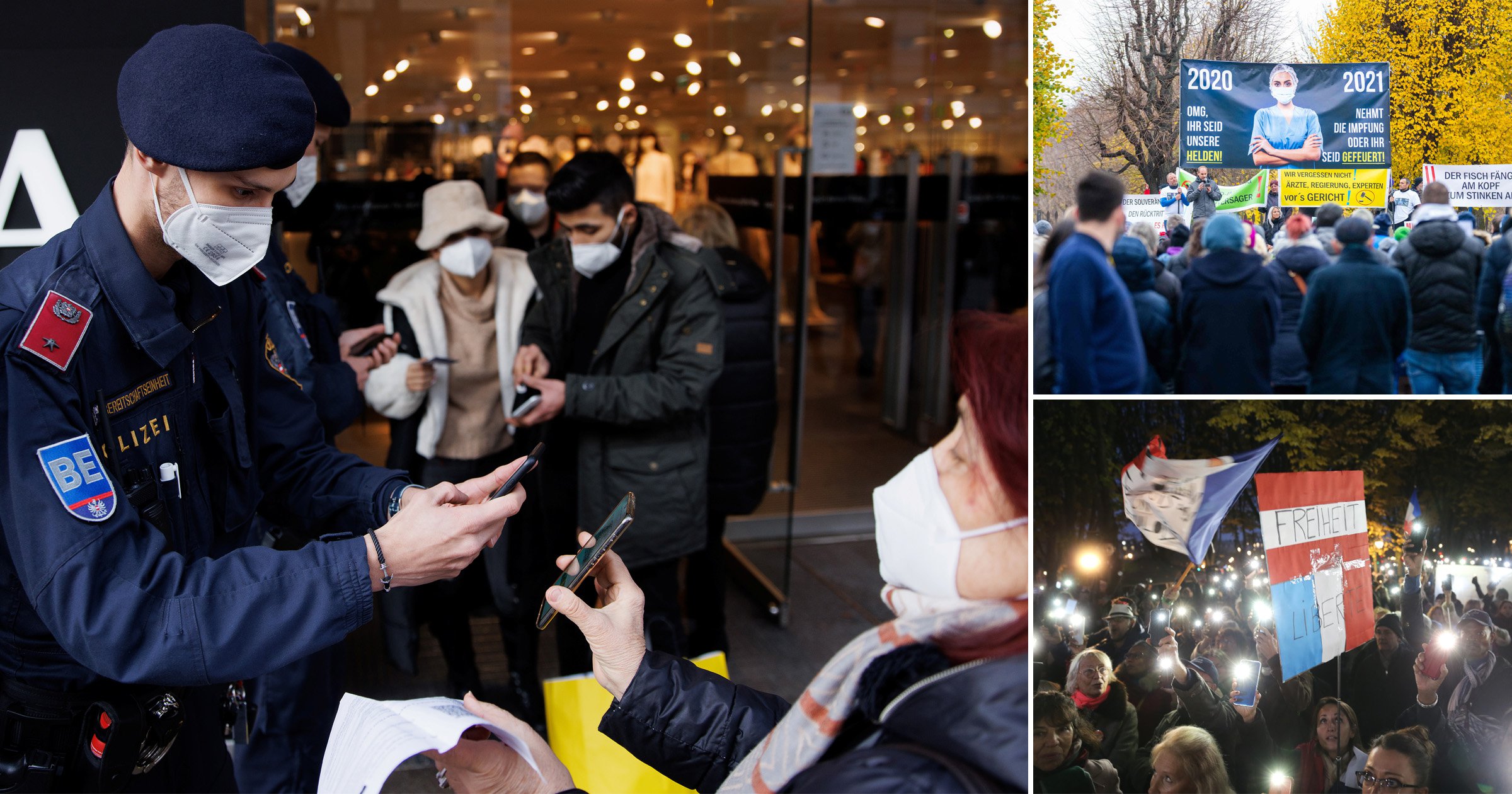 Austria has brought in a full national lockdown and made Covid jabs compulsory in an effort to tackle a fourth wave sweeping Europe.

Chancellor Alexander Schallenberg told a news briefing the restrictions will last a maximum of 20 days, beginning on Monday and ending December 9.

He also announced it would be a ‘requirement to get vaccinated’ from February 1.

Students will have to go back into home schooling, restaurants will close and cultural events will be cancelled.

‘We do not want a fifth wave,’ Mr Schallenberg said.

Only 66% of Austria’s population is double jabbed – one of the lowest rates in western Europe.

Meanwhile infections in Austria are among the highest in Europe, with a seven-day case rate of 971.5 per 100,000 people.

The country had already announced a lockdown for unvaccinated people with two states – Salzburg and Upper Austria – set to go into a full lockdown from next week.

The tougher approach comes after the World Health Organisation (WHO) warned Europe is the only region across the globe where deaths from Covid are increasing.

The continent is once again the epicentre of the virus, accounting for more than half of the seven-day averages of infections globally last week, and about half of the latest deaths.

Germany, Slovakia, Greece and the Netherlands are among the other nations to announce new measures in the run up to Christmas.

Many are resisting full-scale lockdowns, choosing instead to target people who aren’t fully vaccinated.

Last night, Germany announced curbs on public life for residents who haven’t had a jab in areas where hospitals are filling up.

The country is being battered by a rise in cases, with new infections hitting a record high of more than 65,000 on Thursday.

Chancellor Angela Merkel said the situation with coronavirus is ‘dramatic’ as she announced a raft of new measures aimed at curbing the winter surge.

In areas with a hospitalisation rate of more than three Covid-19 patients per 100,000 people over the past seven days, only those who have been vaccinated or recently recovered from the virus will be allowed into public spaces such as sporting venues and restaurants.

The move follows in the footsteps of the Czech Republic, Greece and Austria.

Under surprise rules announced on Wednesday, unvaccinated Czechs will not be able to go to public events, restaurants, pubs or other services from next week.

Residents will need to show evidence they are double jabbed or have been infected in the past six months if they want to go about their daily lives as normal.

Slovakia took a similar step, in what Prime Minister Eduard Heger called a ‘lockdown for the unvaccinated’.

In Greece, unvaccinated people have been banned from all indoor spaces, such as cinemas, museums, and gyms.

The country’s Covid death rate has reached its highest level in six months, and roughly one-third of the population remains unvaccinated.

Other countries have stopped short of a lockdown but brought back other measures to contain the virus.

Belgium said on Wednesday that people should work from home four days a week until mid-December and three days after that.

Anyone over 10 will have to wear a mask indoors, and people will have to show a Covid safe Tickets (CST) proving vaccination, a recent cured infection, or a negative test, if they want to enter restaurants, theatres, and other public places.

Although Belgium has a high vaccination rate, its infection rate is still above 1,000 per million people, its highest in more than a year.

‘If we want to avoid another lockdown, we have to show a sense of responsibility.’

In Hungary, a third booster shot will become mandatory for all healthcare workers and people will have to wear a mask in most indoor places from Saturday.

In the Netherlands, where intensive care units are almost at capacity, a partial-lockdown has been imposed, with bars and restaurants forced to close at 8pm and Covid passes required to enter public spaces.

Meanwhile, Italy is weighing up whether to impose a lockdown on the unvaccinated after cases surged by nearly 30% in a week.

‘Eventual new lockdowns should not have to be suffered by those who are vaccinated. Restrictions should only apply to those who are not immunized,’ said Massimiliano Fedriga, governor of Friuli-Venezia Giulia in the country’s northeast.

There have been protests in France amid fears the country will follow suit.

New coronavirus cases have topped 20,000 a day for the first time since August.

But President Emmanuel Macron said the country did not need to follow those European countries imposing lockdowns on unvaccinated people, because of the success of its health pass in curbing the virus’ spread.

With cases spiking all over Europe, Boris Johnson has warned people not to be complacent and to get their booster jab.

The government is putting its faith in the vaccines to avoid further restrictions, but has not ruled out a lockdown if need be.

‘We don’t yet know the extent to which this new wave will sweep up on our shores but history shows that we cannot afford to be complacent,’ the prime minister said.

Yesterday, the UK recorded another 46,807 Covid cases, the highest figure for nearly a month. But deaths and hospitalisations have remained relatively low.

Scientists generally agree that a return of national restrictions is not needed, but some have called for extra measures if the NHS becomes overwhelmed.

Prof John Ashton warned yesterday that the UK could follow in the footsteps of Germany and Austria by locking down the unvaccinated.

‘I fear that it might come to that,’ he said.

‘We all need to be playing our part, and at the moment, it’s as though the thing is over. We really need to get back to wearing masks, social distancing and yes, passports.

‘This is not about civil rights, it’s about winning the battle with this virus and not throwing in the towel.’