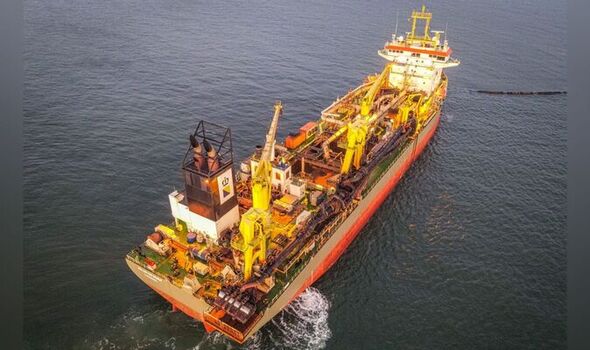 The Willem Van Oranje is a Hopper Dredger that was built in 2010. It is currently sailing under the Cyprus flag close to Rhos-on-Sea, Wales.

Weighing up to 21,200 tonnes and spanning more than 130-metres in length, the Boskalis Dredger has left ship spotters in awe.

The ship is the “main player” in a £14m year-long scheme to improve coastal defences using one million tonnes of sand.

Bulldozers are already hard at work shoring-up the coastline with sand before the main element of the work begins.

Last month, a two kilometer cast iron pipeline, was built ahead of the dredging of the seabed for the sand, which is being undertaken this month. 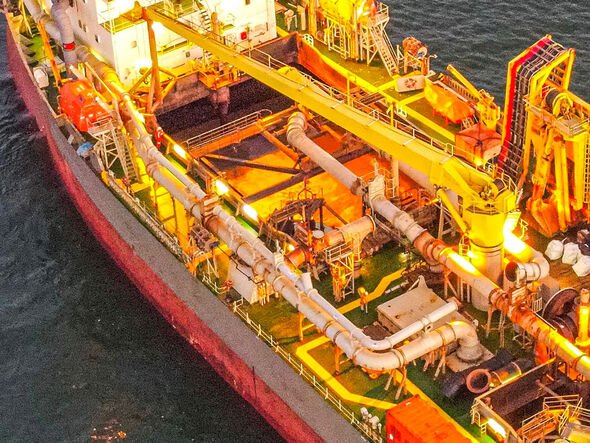 The Willem Van Oranje vessel will take frequent trips from the Rhos-on-Sea harbour and sail back to take sand from an offshore area in the Irish Sea before returning during high tide to deliver it onshore via the pipeline.

While the ship is off the coast of North Wales, many people are heading to the area to watch the shore line being extended.

The ship is one of the first dredging vessels in the world to be powered entirely by biofuel.

This allows a substantial carbon reduction of 90%, thereby contributing to a reduction of Boskalis’ carbon footprint. 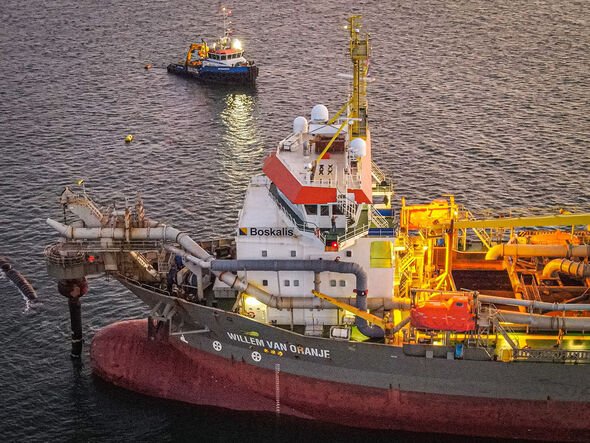 Images shared by @droneographs_, show onboard the ship which has a hopper capacity of 12,000 cubic meters and total installed power of 13,870 kW.

The versatile vessel can dredge to a depth of up to 62 meters.

Conwy County Borough Council says the Rhos-on-Sea beach height will be increased by about five metres at the seawall with approximately one million tonnes of “imported gold sand pumped on to the beach via offshore dredging”. 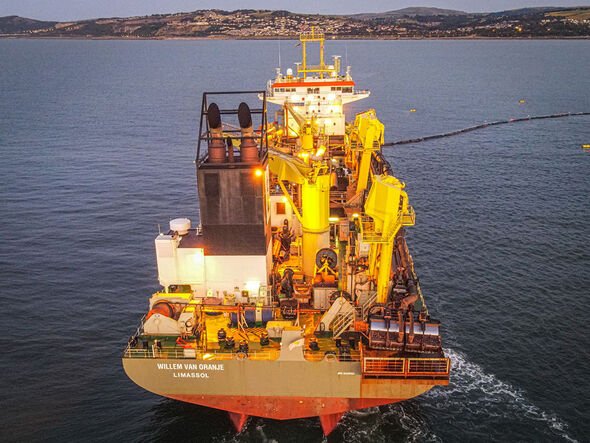 A borough council spokesperson said: “This sea defence work is essential to protect Rhos on Sea in the future. We’re importing the sand during the summer months because the work requires calm seas and we have to avoid the overwintering birds season.”

The £14m plans also involve creating a new rock barrier to stop the sand drifting across the beach.

The town’s West Promenade will also be widened for pedestrians and cyclists, as well as play areas, and gardens.

A new rock groyne will use material from existing rock groyne structures and rock armour, which would otherwise be buried beneath the new beach.

Reusing this material reduces the cost of the project as there is no need to import more rock material.

The promenade work will continue over the winter and the council expects the whole scheme to be finished by spring 2023.