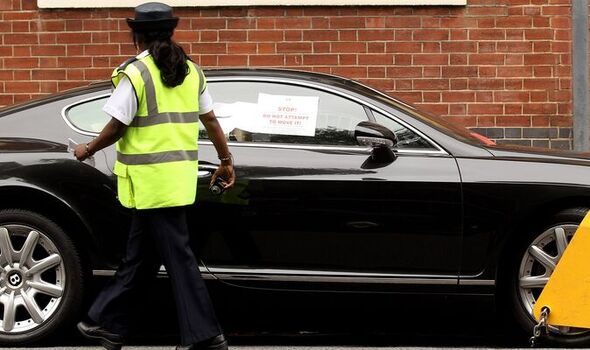 More than 1,000 traffic wardens were physically assaulted or verbally abused last year, including one who was threatened with an axe. A warden was battered with a traffic cone and another groped by a gang of men, while one was maliciously labelled a paedophile by an angry motorist, a dossier reveals.

Staff regularly had hand-held computers used for issuing tickets ripped out of their grasp. In other cases, they were pelted with stones, eggs, drink containers and dog mess.

The survey of local authorities uncovered the barrage of abuse and violence the workers have to face every day as they patrol the streets enforcing parking regulations.

The study uncovered 1,131 incidents last year where wardens were victims of physical assault or verbal abuse and threats. That equates to three incidents every day.

Councils revealed their staff were driven into, kicked, and threatened with weapons as well as being intimidated and assaulted.

In Greenwich, south-east London, 12 attacks took place, including one where the victim was hit twice with a traffic cone before being pushed up against a wall and repeatedly punched and kicked.

In Brent, north-west London, an irate driver first threw his drink out of the car window at the warden and then hurled his sandwich at them, before driving away.

A warden in Cornwall had a bag of dog mess thrown at them, while in Hull a driver took a picture of a warden and said he would post it online, labelling them a paedophile.

An angry woman who returned to her car in Barnsley to find she had been issued with a fine ripped the ticket off her vehicle and slapped it on to the back of the warden. The tally of attacks comes after a court case in 2020 where 40-year-old Alex Owers, of Hull, was jailed for 23 months after he forced a warden to eat the ticket he had just issued.

And in Plaistow, east London, Rodall Misuri knocked a warden unconscious and stamped on another’s head in a parking row outside a primary school. The 31-year-old, who had to
be restrained by the public, admitted GBH and was jailed for two years and four months.

In Newcastle, a warden had her bottom groped as a group of men walked past her, and Wakefield Council said one of its workers had been threatened by a driver armed with an axe.

In Newham, London, a warden came under attack and was pelted with 10 eggs, while in Central Bedfordshire a firework was hurled.

Andy Prendergast, GMB National Secretary, said: “It’s an utter disgrace that so many traffic wardens go into work each day not knowing if they will come home safely at the end of it.

“People grumble about getting a ticket but, ultimately, our traffic wardens are doing a ­difficult job we all need to be done.”