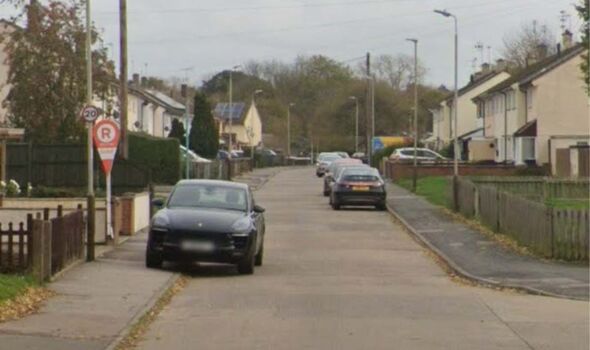 A head-on collision resulted in a baby girl suffering from devastating skull fractures after her drunk dad crashed the car he was driving into an oncoming vehicle.

The four-month-old was sitting unsecured in the back seat at the time of the crash in Eyres Monsell, Leicester.

Two people in the oncoming vehicle were also injured, with one suffering a smashed and dislocated elbow.

Richard Hefford had drunk numerous beers and a Bacardi and Coke before setting off from his home in Kelso Green, Leicestershire Live reports. He was driving with his baby daughter and three females to go to the pebble beach area of Aylestone Meadows at 7pm on one of the hottest days of last summer.

With the baby in the back being held by one of the women, he turned out of Kelso Green and sped up Ambleside Drive at nearly twice the 20mph speed limit, colliding with an oncoming car just seconds into his journey.

A CCTV recording from a house near the junction of Ambleside Drive and Packhorse Road caught the collision, and the footage was played during a sentencing hearing at Leicester Crown Court yesterday. It showed Hefford’s silver Vauxhall Corsa travelling at high speed towards a parked car on his side of the road, and then suddenly pulling out to pass the vehicle just as a red Audi containing two friends turned onto the road.

A witness parking his car in the street later described how he heard the loud bang of the collision, and then rushed towards the cars. He saw the baby was in distress and had a visible swelling to her head.

An ambulance arrived in 20 minutes. The baby – who, being under 14 months, should have been strapped into a baby seat by law – was rushed to hospital for treatment for two skull fractures, brain haemorrhages, broken ribs and several cuts, and spent 20 days at Queen’s Medical Centre, in Nottingham.

The Audi driver, who is still recovering from his injuries, described in his witness statement hearing loud revving and seeing the Corsa “coming really fast and weaving” in the split seconds before the smash. His passenger in the Audi suffered head and neck injuries and recurring headaches, the court heard.

The two men, who had been travelling to the nearby Co-op to get groceries for dinner, were both taken to hospital.

Officers who were at the scene described father-of-three Hefford, 35, as being barechested and smelling of alcohol. He failed a roadside breath test, later blowing 62 microgrammes per 100ml of breath. The legal limit is 35 microgrammes.

He admitted in his police interview that he had been drinking through the day, for about five or six hours, before getting into the car. The court heard Hefford already had various convictions on his record, including two of driving with excess alcohol, one of aggravated vehicle taking, being drunk and disorderly and driving while disqualified.

In relation to the incidents on Sunday, August 7, last year, Hefford had earlier pleaded guilty to drink-driving and two counts of causing serious injury by dangerous driving, relating to his baby daughter and the Audi driver.

Philip Gibbs, representing Hefford, told the court: “There’s no excuse for having an insecure child in a car and driving like that, under the influence of alcohol. He is utterly devastated that his behaviour had this effect on an innocent four-month-old child.”

He said his client could now only see his children during visits to a contact centre. Mr Gibbs added: “There is no suggestion he is uncaring in relation to his daughter. He’s drinking too much and placing others in danger.”

Recorder Justin Wigoder jailed Hefford for two-and-a-half years. He told Hefford: “You were drinking. You admit that, over a period of five to six hours, you had, in your words, a few beers and a Bacardi and Coke.

“The result is that you were very nearly double the legal limit. You must have known your capacity to drive, and maybe your capacity even to think, was clouded by alcohol.

“You knew it was a street in which people parked and you have to weave in and out. It has a speed limit of 20mph and you were travelling at virtually double that speed.”

Recorder Wigoder told Hefford that had he used a proper baby seat in the car, his baby would probably not have been injured. As well as jailing Hefford, he banned him from driving for 51 months.