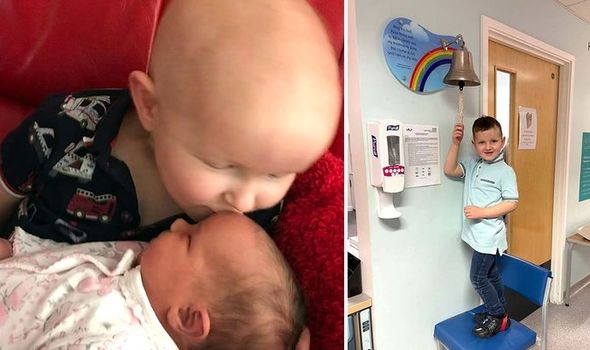 On the day he was diagnosed his mum Jamealla, who was 16 weeks pregnant at the time, told him he was getting a new baby sister. Each day he would cuddle his mother’s bump and he gave his sister the name Minnie. And it gave him the strength to carry on through gruelling chemotherapy treatment.

Brave Franco, now seven, pulled through and in March this year was able to ring his “end of treatment” cancer bell at Royal Manchester Children’s Hospital to celebrate.

Jamealla, 29, from Bolton, said: “He was so excited when he knew he was getting a baby sister ‑ he couldn’t wait to meet her. It really kept him going throughout it all and gave him something else to focus on.

“When we brought Minnie home he was waiting at the window. His face lit up with the biggest smile we’d ever seen.

“He doted on her from the moment she arrived and he has spent every minute he can with her. She gave him the reason to keep going.”

Franco was diagnosed with Acute Lymphoblastic Leukaemia in January 2018 after he started suffering from bruises.

Jamealla said: “He hadn’t been himself for a couple of weeks. He was bruising really easily and he’d had a nosebleed too.

“When I put him in the bath next to Hugo, his brother, I noticed he looked yellow.

“He was due to start school in a few weeks time, so I took him to the doctor to get the bruises checked out. I didn’t think he was himself, but I never imagined it was going to be anything as serious as cancer.”

After doctors carried out tests they broke the devastating news. Jamealla, who lives with husband Ross, said: “We were devastated. We didn’t know what was going to happen. They told us he was so poorly that he had to start treatment straight away.”

Franco had six months of aggressive chemotherapy which took its toll.

Jamealla said: “He was sick and exhausted and lost all his hair. But the one thing that kept him going was the thought of Minnie.

He’d kiss my bump every day and tell me how much he couldn’t wait to meet her.”

After the birth Franco and Minnie were inseparable.

Jamealla said: “He was so good at playing with her. He’d lie on the sofa and stroke her hair. It really soothed him.

“They are incredibly close and are always together. Franco dotes on her and looks after her.

“Now he’s finished his treatment, hopefully we can put it all behind us.

“We are so proud of him. Our friends call Minnie our rainbow baby – she was the rainbow after the darkness of Franco going through cancer.”