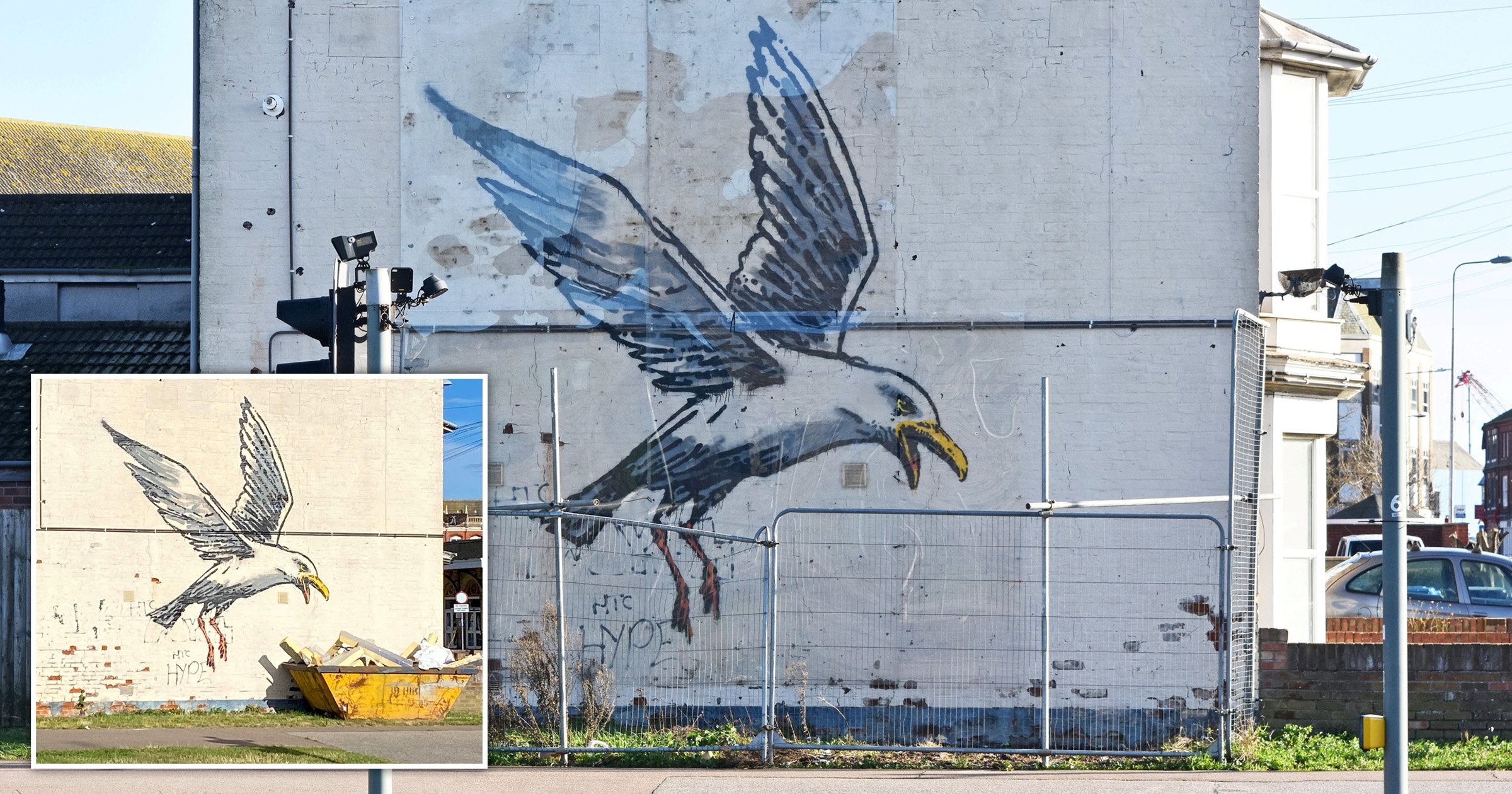 Council bosses have been told to remove a skip that is part of a £2m Banksy mural – after locals kept dumping rubbish into it.

The artwork-on the side of a privately-owned block of flats in Lowestoft, Suffolk- shows a seagull swooping down to steal some polystyrene chips placed in a skip below.

However, the skip disappeared in December, and the landlord of the private property the painting is on has now confirmed it had been removed at the council’s request.

The landlord, who did not want to be named said: ‘East Suffolk Council complained about the mess and wanted to remove the barriers, the skip and the protective screening.

‘We have it in storage. We have secured the protective screening and cleaned up the area.’

The move has dismayed locals in the town of Lowestoft where the mural was based, who claim the piece’s value and humour was derived from the placement of the skip.

John Brandler, a local art dealer of Banksy artwork, estimated that the painting with the skip in place would be worth anywhere between £250,000 to £2 million.

He said: ‘It’s a very beautiful, important and world-famous piece by Banksy.

‘It’s a sad loss that someone has taken all its meaning away.

‘You need the skip. It’s like having an ice cream without the cone.’

John said the value of the seagull painting without the skip was ‘bugger all.’

‘It is incomplete without the skip,’ he said. ‘Would you buy half a car?

‘It has value as a big painting but the value of it to buy is negligible compared to the value it would have had as a tourist attraction to the town.’

John Beasley was a tenant at the property the seagull was painted on when it first appeared in 2021.

He was delighted when it first arrived on his wall but said the skip had attracted fly-tippers.

He said: ‘I was stunned. I heard the scaffolding being put up and taken down, and the skip being put in place.

‘It made my block look so much nicer and the skip was a very clever touch.

‘The skip has now more than likely gone because the local people used it like a bin rather than admire the art.

But despite removing the skip to clean up the area, many residents have criticised the council for not doing more to preserve such an important artwork in the first place.

John Brandler said: ‘I advised the council to create a Street Art Trail and generate revenue for the town but they weren’t interested.

‘Since then, another Banksy piece has been removed and displayed elsewhere and others have been virtually destroyed by the non-interest of the council.

‘It is no surprise that the council has done nothing to secure the skip.’

Mr Brandler suggests the high estimated value of the art would have been even greater to the community if the council had valued it properly, and claims the piece could have potentially brought up to £1 million in tourist revenue to the town each year if the right infrastructure was put in place.

The seagull was one of a number of pieces to appear across the county as part of Banksy’s 2021 ‘spraycation’ along the Suffolk coast.

Other pieces included a painting of three children in a boat over a drain and a child digging a hole in the sand with a crowbar.

Several have fallen victim to vandalism, with tags and penises spray painted over the unique art pieces.

The seagull’s polystyrene ‘chips’ from the skip had previously been stolen in an attempt to profit off the piece in Feb 2022.