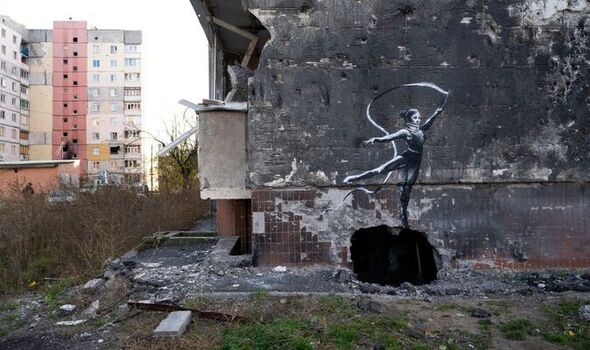 Street artist Banksy appears to have been caught on CCTV painting one of the seven works of art he has confirmed responsibility for in Ukraine.

Footage showing a man spraypainting what appears to be one of Banksy’s new works in the town of Irpin is being shared on TikTok in Ukraine.

Last week, it was revealed that Banksy was in the Ukrainian city of Borodyanka, with the artist confirming it with an image on his official Instagram account.

One of the works by Banksy in nearby Irpin, a suburb of Kyiv 20 miles closer to the capital than Borodyanka, showed a dancer in a neck brace and was sprayed on the side of a bombed-out building.

The grainy video has a time stamp as if filmed on a CCTV camera, and it is believed to have been first uploaded by Ukrainian TikTok user “this_irpin_grisha”, reports Bristol Live.

Their caption states in Ukrainian that the video was first uploaded to YouTube, and asks if Banksy was “in the lens of CCTV” in the town of Irpin.

The video, which has been edited, shows a man in a face mask, black jacket, and black trousers walking towards a wall with a bag.

He gets out a spray can and begins spraying on the wall.

The video cuts to show the half-completed work, with the artist occasionally looking over his shoulder towards a road where cars are driving past.

The final touches to the artwork, at least on the video, show the artist using black paint, and the final image shows the work completed.

The wall shown being worked on with the artwork of the dancer in the neck brace does appear to be the same wall as the one in the images of the final artwork that has been confirmed by Banksy.

But questions remain about whether the man painting the work is Banksy himself and whether he knew he was being filmed by CCTV at the time he carried out the work; the release of the footage could itself be part of Banksy’s work out in Ukraine rather than an inadvertent slip.

Banksy has been captured on camera painting before, most notably in New York, and he is not averse to revealing himself in his own work, albeit obscurely.

Videos posted on Banksy’s own Instagram account showed the artist himself painting works on a London tube train, the side of Reading prison, and in Great Yarmouth in the last couple of years, although every time the film has been carefully edited not to show Banksy’s face.