LONDON — Thousands of people gathered in south London on Saturday for a vigil in tribute to Sarah Everard, the 33-year-old marketing executive whose killing has touched off a national reckoning over violence against women, despite police warnings that the event would be unlawful.

As darkness fell, a growing crowd chanted “Shame on you!” and “How many more!” In what became a rally against gender violence, some clapped their hands and others held tea lights or signs that read “End Violence Against Women” and “She Was Only Walking Home.”

The event, in Clapham Common, near where Ms. Everard was last seen on March 3 on her way back from a friend’s house, had drawn small groups at first, with people gathering in silence around a memorial where flowers had been laid. Earlier, Kate Middleton, the Duchess of Cambridge, was among those who placed flowers at the memorial.

Several women were arrested at the event and handcuffed by the police, in scenes that drew outrage from a wide spectrum ranging from feminist organizations to conservative politicians.

Other protesters, some unmasked, engaged in tense faceoffs with the police, but on Saturday evening the response by the force threatened to throw the Metropolitan Police into crisis. Top officials, including London’s mayor, Sadiq Khan, and Home Secretary Priti Patel, called the response upsetting and unacceptable, and said they had asked for a report into it.

“The scenes from Clapham Common are unacceptable,” Mr. Khan said on Saturday evening. “The police have a responsibility to enforce Covid laws, but from images I’ve seen it’s clear the response was at times neither appropriate nor proportionate.”

A court had ruled late Friday that the gathering could be deemed unlawful because of Covid-19 restrictions, and the police had urged people to stay at home. Organizers of the vigil eventually relented and called for a national doorstep vigil instead, though in the end that did not dissuade people from flocking to the park anyway. 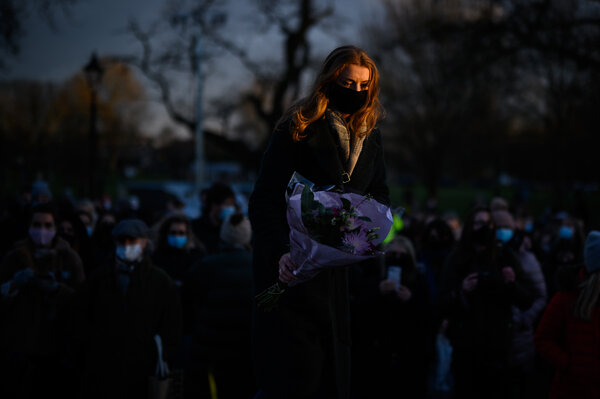 With Britain gradually coming out of a monthslong lockdown, the fight over the vigil posed critical questions over balancing freedom of assembly and safety measures in the months to come, and recalled debates over marches against police brutality last year.

A 48-year-old police officer, Wayne Couzens, who appeared in court on Saturday, has been charged with kidnapping and murdering Ms. Everard. On Saturday, crowds chanted “Shame on you!” and “Arrest your own!” at the police officers who tried to disperse protesters.

More than 30 gatherings were planned across Britain on Saturday, in what organizers hoped would convey the outpouring of solidarity and anger that Ms. Everard’s killing had set off this week.

Thousands of women have shared their own stories of street harassment and assault on social media, with Ms. Everard’s case now symbolizing an issue that many say plagues Britain: the insecurity that women face on a daily basis, at home or in public spaces.

While the authorities have tried to reassure the public by pointing out that abductions in London are rare, the city’s mayor, Sadiq Khan, has also acknowledged that its streets are not safe enough. Many women have said that as lockdown restrictions have emptied the country’s streets, they have felt unsafe walking in public.

Ms. Everard was last seen alive at around 9.30 p.m. on March 3. She had left her friend’s house at around 9 p.m., and the walk home should have taken her 50 minutes.

Her family described her as “a shining example to us all” who was “kind and thoughtful, caring and dependable.”

“Sarah was bright and beautiful — a wonderful daughter and sister,” they added.

Lawmakers, activists and women’s rights organizations had called on people to gather on Saturday in Clapham Common, the South London park near where Ms. Everard was last seen. But the organizers, nine women from the umbrella group Reclaim These Streets, said the police had told them that they would face a fine of 10,000 pounds ($14,000) if they went ahead with their plans.

Jamie Klingler, one of the planners, said the organizers had suggested, without success, alternatives like splitting the gathering into several time slots, or organizing a walk-by memorial.

“We’re protesting against violence against women, and we’re being shut down by the police,” Ms. Klingler, a 42-year-old events manager, said in a telephone interview earlier Saturday. “I’m baffled.”

At the rally on Saturday evening, several protesters shouted “Who do you protect?” at police forces. Officers forcefully removed protesters standing under a pavilion in the park, which has been turned into a memorial for Ms. Everard.

The Metropolitan Police force has been under criticism for days. On Thursday, the police watchdog said it was investigating whether two officers had “responded appropriately” to an allegation of indecent exposure against Mr. Couzens, the officer who was charged with killing Ms. Everard and is suspected of having exposed himself at a fast-food restaurant in South London days before Ms. Everard went missing. It remains unclear why he wasn’t suspended.

In a picture that went viral on social media, hundreds of people held up their smartphone lights in tribute to Ms. Everard as they faced a line of police officers standing in the park. In another one, an officer appeared to straddle a masked protester who was later arrested.

The scale of the gathering on Saturday, along with the outpouring of accounts of harassment this week, is likely to add pressure on Boris Johnson’s government, which is scheduled to unveil a plan to tackle violence against women and girls later this year. Home Secretary Priti Patel said on Friday that a call for testimony about harassment, which had received 15,000 contributions, would be extended for two weeks.

Lawmakers are also set to debate a bill on domestic abuse next week, with growing momentum across party lines to include an amendment treating misogyny as a hate crime.

Several lawmakers had supported the vigil’s going forward, despite the restrictions.

“Even in a pandemic a small, responsible, risk-assessed vigil could surely be accommodated?” Joanna Cherry, a lawmaker for the Scottish National Party, said on Twitter. “Women’s fear of the hate & violence against us needs expression.”

As an alternative to the vigil, organizers urged people to hold a light on their doorstep at 9.30 p.m. local time. Several officials, including Prime Minister Boris Johnson, said they would light a candle for Ms. Everard.

But the event in South London eventually turned into a large gathering, echoing an overall sentiment that flooded social media throughout the week: that women had had enough.

In a statement published hours before the rally took place, the organizers of Reclaim These Streets said, “We are clear that women’s voices will not be silenced, now or ever.”