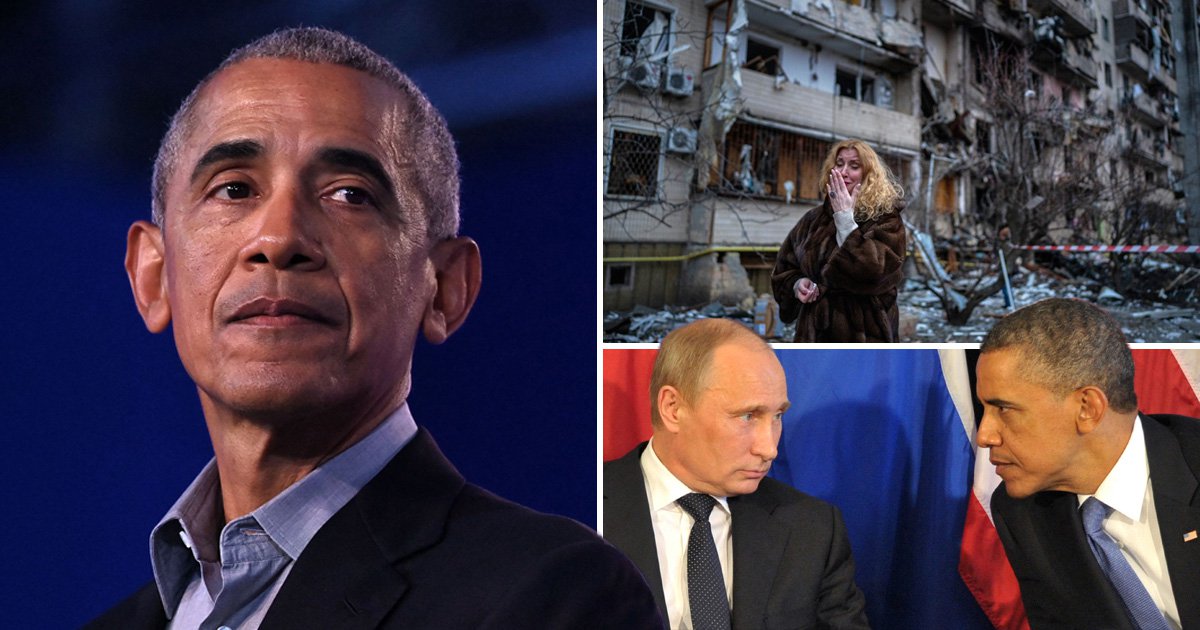 The former US president released a statement on Thursday, hours after Russia began its offensive by land, air, and sea following a declaration of war.

Mr Obama accused Russia of launching ‘a brazen attack on the people of Ukraine, in violation of international law and basic principles of human decency’.

He went on: ‘Russia did so not because Ukraine posed a threat to Russia, but because the people of Ukraine chose a path of sovereignty, self-determination, and democracy.

‘For exercising rights that should be available to all people and nations, Ukrainians now face a brutal onslaught that is killing innocents and displacing untold numbers of men, women, and children.’

Mr Obama added: ‘People of conscience around the world need to loudly and clearly condemn Russia’s actions and offer support for the Ukrainian people.

‘And every American, regardless of party, should support President Biden’s efforts, in coordination with our closest allies, to impose hard-hitting sanctions on Russia – sanctions that impose a real price on Russia’s autocratic elites.

‘There may be some economic consequences to such sanctions, given Russia’s significant role in world energy markets. But that’s a price we should be willing to pay to take a stand on the side of freedom.’

He said: ‘I join the international community in condemning Vladimir Putin’s unprovoked and unjustified invasion of Ukraine.

‘We cannot tolerate the authoritarian bullying and danger that Putin poses. Ukraine is our friend and democratic ally, and deserves our full support during this most difficult time.’

Their strong condemnations of Mr Putin contrasted with the remarks of Mr Trump, who called the Russian leader a ‘genius’.

He told the conservative ‘Clay Travis and Buck Sexton Show’ earlier this week: ‘I said, this is genius: Putin declares a big portion . . . of Ukraine as independent. How smart is that? And he’s gonna go in and be a peacekeeper. That’s [the] strongest peace force.’

Mr Trump has not spoken since the invasion started.

Leaders of the 30 Nato allied nations will meet on Friday, current US President Joe Biden confirmed, as they come under pressure to go even further than sanctions already announced to hit the Kremlin.

In the US, Mr Biden also announced extra sanctions to target Russian banks, oligarchs and high-tech sectors, with more troops deployed to Germany to bolster Nato.

‘Putin is the aggressor,’ Mr Biden said. ‘Putin chose this war, and now he and his country will bear the consequences.’