Critics hit out at BBC Scotland saying bosses “should be ashamed” after it overturned their initial decision to axe its televised COVID-19 press conferences. BBC Scotland said it will screen First Minister Nicola Sturgeon’s coronavirus briefings over the “coming weeks”, as the corporation looks to adapt how it covers the daily updates.

But social media users accused the corporation of allowing themselves to be “bullied by the SNP” and said they had buckled under “political pressure”.

One said: “Is this a #Uturn from @BBCScotland?”

Another said: “You should be ashamed of yourselves, cowards allowing yourselves to bullied by the SNP it’s not North Korea” 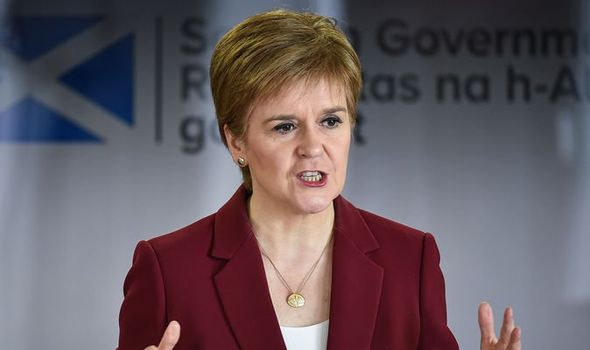 One added: “If BBC Scotland don’t feel humiliated, they should!

“We all know that political pressure played a large part in the broadcaster’s initial decision.”

The broadcaster sparked an outcry when bosses said last week they would no longer always provide live coverage of all of the regular briefings – explaining at the time they would decide if these should be televised based on “editorial merit”.

Deputy First Minister John Swinney branded the move a “matter of regret”, while SNP MPs questioned the move at a time when coronavirus cases are increasing again.

Meanwhile Donald Macaskill of Scottish Care, the body which represents independent care homes, has said he was “very disappointed that in the midst of the largest public health emergency ever that BBC Scotland has decided to cut back coverage”.

Now a BBC Scotland spokesman has confirmed: “Whilst there continue to be major developments in the pandemic in Scotland, we will, over the coming weeks and as we have done this week, look to cover the Scottish Government health briefings live on TV.

“There are clearly strong editorial reasons for continuing to do so at the moment.”

BBC Scotland said it was looking to “enhance” its coverage of the briefings, by bringing in “other voices and other perspectives”.

This live coverage will be in addition to “significant” coverage in the BBC’s television news bulletins, and radio and online services, the spokesman said.

He added: “As we said last week, such decisions will always be made on the basis of editorial judgment and listening to our audiences.

“We will always take full account of how the pandemic continues to evolve to inform that judgment.

“Our coverage of coronavirus and public health issues in Scotland will continue to incorporate a range of voices and perspectives, and this will be further enhanced as part of our ongoing coverage of the Scottish Government briefings.

“This will allow us to bring news and views from around Scotland and beyond, involving politicians from across the political spectrum, as well as commentators, analysts and other experts.

“We remain committed to having this broad coverage of voices and perspectives across all our news outlets on television, radio and online.”