Coronavirus restrictions saw millions forced to celebrate the start of 2021 from their living rooms tune in for the much-heralded fireworks display and light show from London. But many were left outraged after hundreds of illuminated drones formed the shape of a BLM clenched fist in the skies above the capital as well as a turtle with the map of Africa on its shell as part of a climate-change segment.

Had my London fireworks ruined by politics again. Turned off after four minutes

Eyebrows were raised at the very beginning of the show when London’s landmark Thames bridges were lit up in the blue and yellow of the EU flag – just an hour after Britain finally left the bloc at the end of the Brexit transition period.

Many viewers jumped on social media to express their anger at the event’s political content.

One tweeted: “Had my London fireworks ruined by politics again. Turned off after four minutes.” 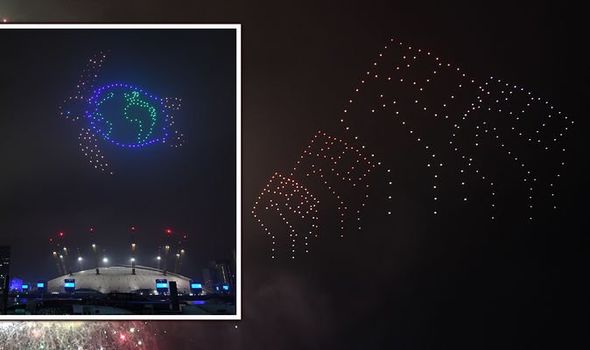 Another complained the organisers “just had to force politics into it”.

And another said: “Well, the London celebrations were a little bit political weren’t they!

“Could’ve just set off fireworks and had a bit of music, but no.” 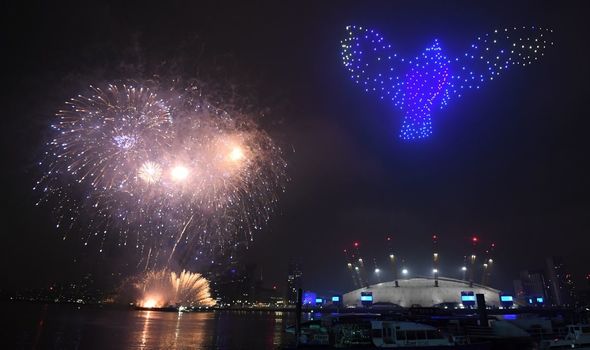 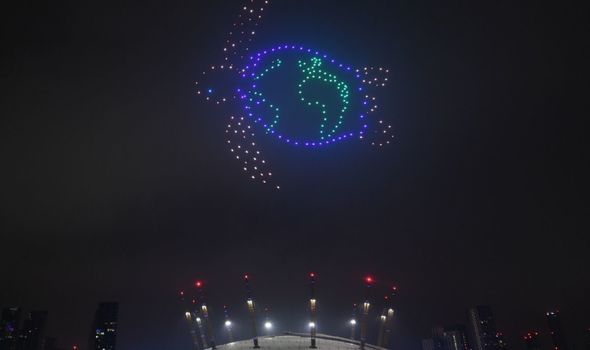 The light and fireworks show also including tributes to the NHS and notable figures from the year.

As the display began, a male voice recited a poem which set the theme: “In the year of 2020 a new virus came our way; We knew what must be done and so to help we hid away.”

Several images filled the sky over the O2 Arena formed through the use of 300 drones, one of which showed the NHS logo in a love-heart while a child’s voice said “Thank you NHS heroes”.

There was also a special tribute to BAME NHS workers – “so many of the nurses and doctors and consultants and cleaners, the helping hands guiding us through this storm”. 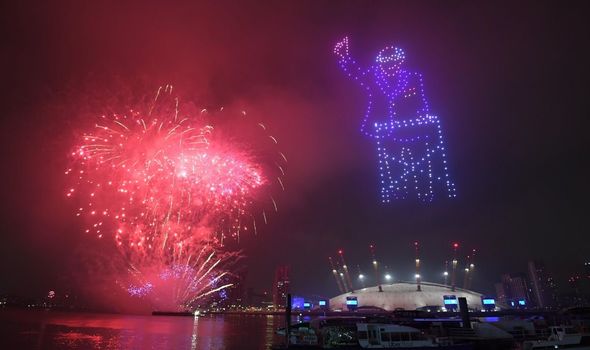 There was a special mention for one of the more remarkable identities of 2020, Captain Tom Moore, who raised £33 million pounds by walking in his back garden.

A huge drone-formed outline of the familiar sight of Captain Moore standing at his walking frame and giving a thumbs-up shone over the arena, backed by a chorus of voices calling “Thanks Captain Tom”.

The 10-minute display also featured a humorous nod to one of the “new normals” of 2020 – working from home.

The sounds of a video conference call starting up were heard, before the now-familiar and somewhat desperate words rang out – “No, you’re on mute!” – as a mute logo filled the night sky.

The show ended with an ecological rallying call in the much-loved voice of Sir David Attenborough, reminding all of a reality shown so starkly in the past 12 months – the fragility of life on earth.

“With a new year comes the opportunity for change, and if we act in 2021 we can make a world of difference.

“Together we can turn things around. Together we can restore our fragile home, and make it a happy new year for all the inhabitants of planet Earth.” 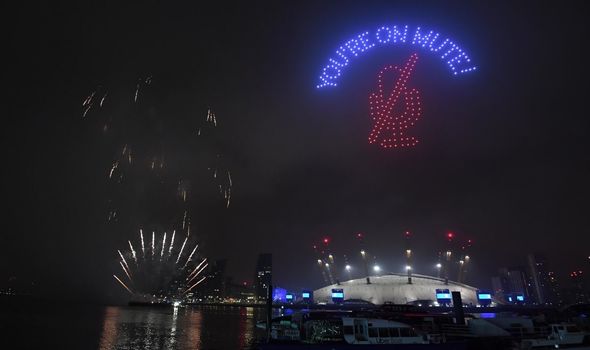 London mayor Sadiq Khan said although crowds along the river were this year banned due to the covid restrictions, the display had reflected the resolve of Londoners to endure despite the pandemic.

He said: “I’m proud that the eyes of the world turned to our capital to see a unique drone, lighting and firework show that reflected on the defining moments of this year, paid tribute to our NHS heroes and the way that Londoners continue to stand together, and showed why our city is the

greatest in the world.

“We showed how our capital and the UK have made huge sacrifices to support one another through these difficult times, and how they will continue to do so as the vaccine is rolled out.”