BBC’s Europe Editor Katya Adler has claimed some EU figures believe the UK was “pushed too far” over the backstop element of the Brexit withdrawal agreement. The backstop element was considered one of the major problems with Theresa May’s withdrawal agreement, as it threatened to keep the UK tied to the European Union’s customs union indefinitely. Ms Adler also suggested there could be Brexit movement in Autumn, as the UK approaches it’s scheduled date of departure from the bloc at the end of October.

She said: “I think they will engage more in the Autumn, for the simple reason that the Brexit extension runs out on October 31, and we know none of those leaders, including Emmanuel Macron, wants a Brexit without a deal, because it will be costly politically and economically, for all of them. And for the big two, France and Germany, absolutely.

“However, they won’t look for no deal at any cost and what they think is it is very easy for all of those right now who are hungry for Theresa May’s job, to promise all sorts of things.

“You know, ‘a pain-free no deal Brexit, a total renegotiation’ and neither of those two are going to happen.

“As for the backstop, there are those who privately say in EU circles, that they worry the UK was pushed too far. 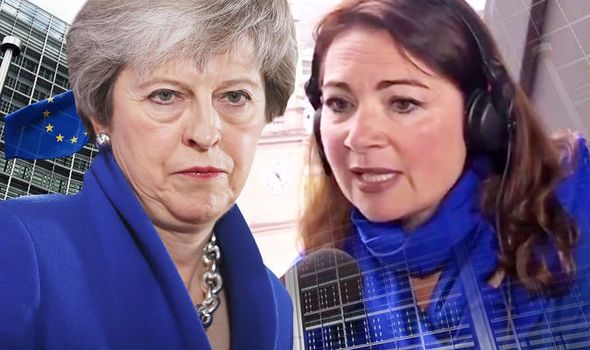 As for the backstop, there are those who privately say in EU circles, that they worry the UK was pushed too far

“On the other hand, they absolutely want to protect, member state Ireland, so I think Autumn, will be a hot one.”

Prime Minister Theresa May travelled to an EU summit on Tuesday but did not discuss Brexit with her counterparts.

Mrs May told reporters: “While I have been Prime Minister, I have been to something like 15 Council meetings or more.

“Every one of those I have been working hard to ensure the best possible deal for the UK in leaving the European Union. It is a matter of great regret for me that I have not been able to deliver Brexit.

“But, of course, that matter is now for my successor, and they will have to find a way of addressing the very strongly held views on both sides of this issue, and to do that, and to get a majority in Parliament, as I said on Friday, I think will require compromise.”

Conservative leadership candidates have been outlining whether they would be willing to walk away from the EU without a deal at the end of October, with 11 Tory MPs now having put themselves forward to replace Mrs May.

Announcing that he would run to become Prime Minister, just hours after Mrs May delivered her resignation speech on Friday, former foreign secretary Boris Johnson said the UK needs to be open to leaving with no deal.

He said: “We will leave the EU on October 31, deal or no deal. The way to get a good deal is to prepare for a no deal.”

Writing in the Telegraph earlier this week, Foreign Secretary Jeremy Hunt warned against the prospect of the UK leaving the EU without a deal, claiming it would be “political suicide” for his party.

International Development Secretary Rory Stewart, has also claimed a “no deal Brexit would be damaging and unnecessary.”

On Wednesday morning, Brexit Minister James Cleverly, who has also put himself forward for the top job, told BBC’s Today programme that leaving the EU with no deal was “not my preferred destination” but would not be massively damaging to the country.