BBC News’ Political Editor Laura Kuenssberg delivered a warning to Boris Johnson as she discussed the Conservative leadership race to take over from Theresa May. Mrs May delivered her resignation speech at the end of May insisting she would step down as party leader on June 7, sparking a leadership contest. Just hours after her speech finished Boris Johnson, the former foreign secretary, announced he would stand for the Tory party leadership and to try to become Prime Minister.

Speaking on BBC’s Politics Live, Laura Kuenssberg delivered a warning to Mr Johnson despite admitting he held the “momentum” in the leadership race.

She said: “About half of the Tory parliamentary party have not declared yet.”

BBC host, Jo Coburn, interrupted, demanding to know what the Conservative MPs were “waiting for”.

Kuenssberg replied: “Well I think genuinely, I think a lot of people want to see what policies are put forward, shock, horror, revolution. That is definitely part of it. 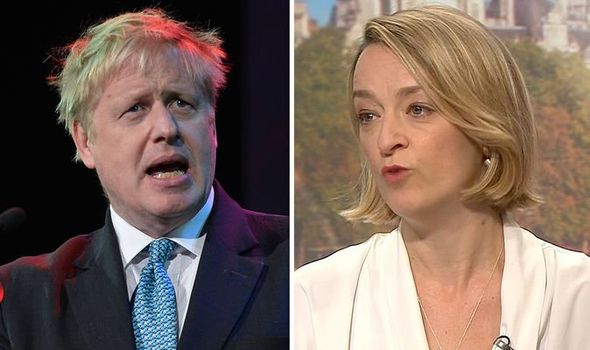 We’ve been there before haven’t we

“Of course, others want to see what the momentum of the race takes things.”

Asked whether the momentum was already with the former foreign secretary, Ms Kuenssberg replied: “Well, it is for now, certainly.”

She added: “We saw this morning in the Times, three up and coming ministers putting their backing behind Boris Johnson.

“But, then in the Evening Standard in the last ten minutes, Anne Milton and Claire Perry, both friends of Politics Live, have come out for Michael Gove.

“It is early days. Right now the consensus, and I think it is the correct consensus, is that this race is Boris Johnson’s to lose.

“But, we’ve been there before haven’t we.”

The BBC presenter quickly responded by saying that “frontrunners are always the ones to fall”.

Mr Johnson was heavily tipped to take over from David Cameron as Prime Minister in 2016 but unexpectedly withdrew from the race.

Michael Gove, who was eliminated from the 2016 leadership race in the second round of voting, claimed he ran after deciding “reluctantly but firmly” that Mr Johnson was not capable of uniting the party or the country.

So far, 11 Conservative MPs have put their names forward to take over from the Prime Minister.

Earlier this week both Housing Minister Kit Malthouse and Brexit Minister James Cleverly pulled out of the crowded race to succeed Mrs May.

The Conservative Party on Tuesday met to agree changes to the internal rules regulating the selection process for the new leader and said the new Prime Minister will be in place by July 22.

On Monday, Mr Johnson posted a campaign video on Twitter in which he said he would be willing to walk away from the European Union with or without a deal at the end of October.

In the campaign video, Mr Hunt warned the UK could be “stuck in a paralysis that leads to a general election” if Brexit negotiations are badly handled.

He said: “We could be stuck in a paralysis that leads to a general election and puts into Downing Street the most left-wing, the most dangerous leader of the Labour Party we’ve ever had in our lifetimes.”