The BBC’s royal correspondent admitted to struggling when he switched to discussing the Queen “in the past tense” as he delivered an immediate tribute to Her Majesty. Buckingham Palace announced the Queen had died “peacefully” in the afternoon of September 8, 2022. Speaking with a wobbly voice, Mr Witchell said: “She was very down to earth, straightforward, and an unpretentious woman.

“Rather reserved, certainly in her early years, there was none of that vainglorious and overbearing behavior that, perhaps, we’ve sometimes seen with other members of her family.

“For 70 years, she’s been the constant, unchanging presence in the background of our lives.”

Mr Witchell continued: “The head of the nation, as she’s sometimes been referred to.

“Above politics but with a shrewd interest in and a grasp of politics, and of political figures. 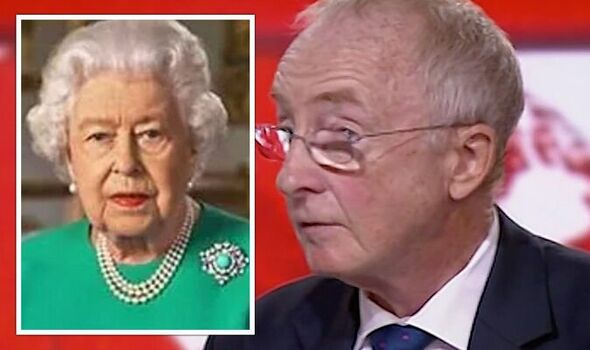 “We now look back on and there will be so many tributes as people, take this in, come to terms with their own emotions and, I’m quite sure, there will be many people who are very emotional at this moment as they learn of this news, the death of the Queen.”

Buckingham Palace said in a statement: “The Queen died peacefully at Balmoral this afternoon.

Elizabeth’s eldest son Charles, 73, automatically becomes king of the United Kingdom and the head of state of 14 other realms including Australia, Canada and New Zealand. His wife Camilla becomes Queen Consort.