Princess Beatrice and Eugenie watched as their father, Prince Andrew and King Charles III led a vigil in memory of Queen Elizabeth II this evening. The royals had solemn looks on their faces as they mourned their late grandmother. 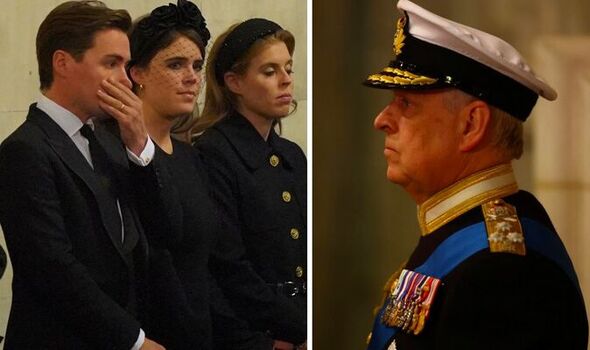 The King and his siblings stood in silent contemplation as they guarded their mother’s coffin in Westminster Hall.

The Queen’s children – Charles, the Duke of York, the Princess Royal and the Earl of Wessex – took part in the vigil on Friday evening.

The new sovereign, Anne, Andrew and Edward looked sombre as they took their places at the coffin – four days after they participated in a vigil in St Giles’ Cathedral in Edinburgh.

Other members of the royal family, including the Queen Consort, Vice Admiral Sir Tim Laurence and the Countess of Wessex, along with some of the Queen’s grandchildren, looked on.