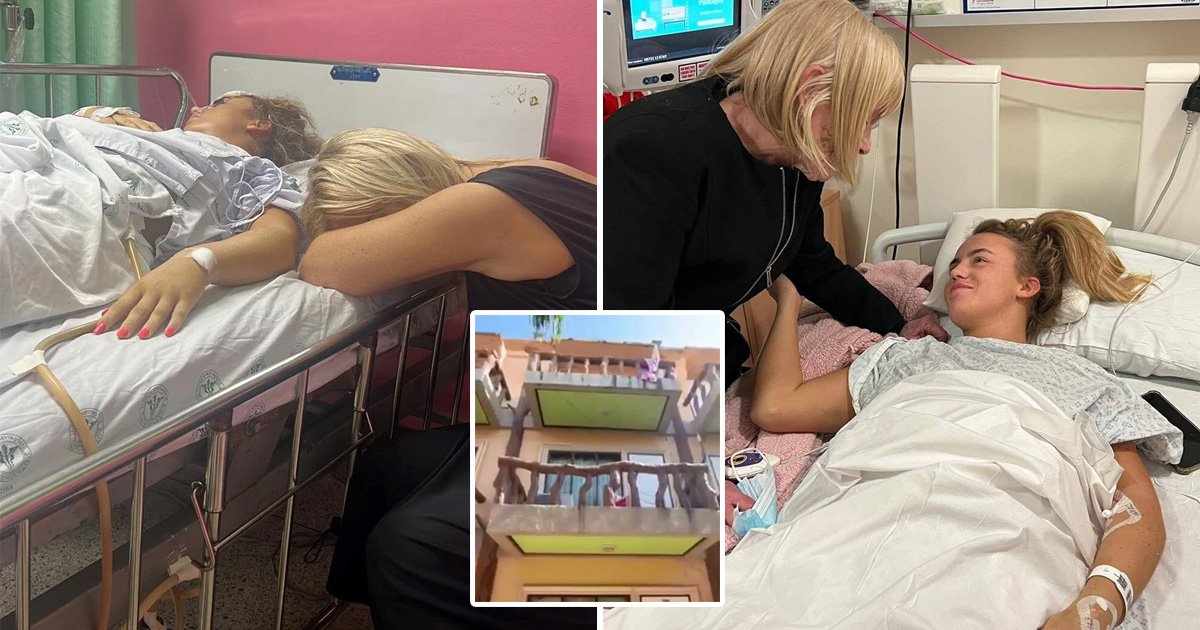 A beautician who was injured in a fall from the balcony of a resort in Thailand has arrived back in the UK after well-wishers raised more than £76,000 in the space of days.

Maddi Neale-Shankster, 21, underwent major surgery after suffering fractures in her back and two punctured lungs.

Her parents were told by medics that she might never walk again after she plunged from the second floor of the apartment at a resort on the south-eastern party island of Ko Pha-Ngan.

The beauty therapist arrived at a hospital in Coventry on Monday morning after a complex medical repatriation that involved a 20-hour flight.

Maddi’s mum, Karen Moseley-Neale, told Metro.co.uk: ‘Maddi is being thoroughly assessed and we have been told she will need six weeks’ bed rest before they can even think about getting her a place in rehab.

‘We are very grateful for all the support and kind wishes but have decided the time is right for privacy during this challenging time.’

Maddi had been in Thailand on a three-week trip with her partner, and had seen in new year on the island, which is famous for its full moon parties.

She fell from the balcony in the early hours of January 1 in circumstances which remain unclear, as she only remembers fragments of what happened.

Karen, who runs The Venue beauty salon in Coventry, told Metro.co.uk: ‘Maddi thinks she went out to the balcony for a cigarette while her partner was asleep and the rest is history.

‘She doesn’t remember anything but somersaulting through the air screaming. After the fall she was left on the floor helpless for 40 minutes until an ambulance finally arrived.

‘Her next memory is being in the ambulance.’

Maddi, from Coventry, started off in hospital on Ko Pha-Ngan before a three-hour boat journey and then an hour by road to another ward on the mainland. She was hooked up to drains to clear the blood and fluid from her lungs and needed two metal rods inserted in her spine.

Karen, 50, and Maddi’s dad, Jamie Shankster, flew out to Thailand as soon as they heard about her fall to be by her side at Surat Thani International Hospital, which lies around 650 miles south of Bangkok, and accompanied their daughter on the flight back to the UK.

They launched a GoFundMe page after it transpired that she did not have adequate travel insurance to cover the repatriation, with the parents being advised that the fees could amount to £100,000.

Without the donations, Maddi faced being stuck in Thailand for up to a year recovering to the point where she could travel without medical assistance.

The appeal raised £76,754 within the space of five days before the crowdfunder was closed, with the family promising to send any unused remainder to charities.

The donations have covered hospital fees, repatriation and transportation costs back to the UK.

Maddi is now being cared for at University Hospitals Coventry and Warwickshire.

Her family is well-known in the city through the independent salon and has been inundated with messages of support from well-wishers.

On the GoFundMe page, Karen said: ‘If you still want to help out directly there are several fundraisers taking place in Coventry which will go towards Maddi’s rehabilitation and help towards her living costs until she is hopefully able to walk and return to work.

‘Once again we cannot thank you all so very much for your generosity, we truly never expected this to happen so quickly and we are forever going to be eternally grateful.’

Karen added that the fundraisers include a Muay Thai event which needs sponsors, with further information available via The Venue.