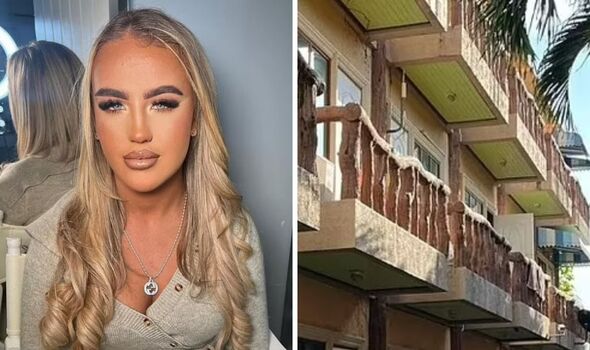 A beauty therapist fears she may never walk again after falling from a balcony while on holiday in Thailand. Maddi Neale-Shankster, 21, from Coventry, fell 60 feet from the balcony on New Year’s Eve on the island of Ko Pha-Ngan. Maddi’s family set up a fundraiser to bring the beauty therapist home after discovering her travel insurance would not cover the costs. £75,000 was raised to bring Maddi home so she could be cared for in the UK.

Maddi had been spending New Year’s Eve with her partner and friends in Ko Pha-Ngan when she fell 60ft from the hotel balcony.

The 21-year-old suffered a broken back, two collapsed lungs and her liver had been pierced by her ribs following the fall.

Her mother, Karen Moseley-Neale, told the BBC: “Before the accident, I was on FaceTime to Maddi. An hour later, we got a phone call from her partner and all I could hear is Maddi screaming in the background and the sirens blaring.”

Karen and Maddi’s father, Jamie Shankster, flew to Thailand to be at their daughter’s bedside and speak with doctors and officials from the British embassy.

The parents now fear Maddi “may never walk again” after the devastating fall.

“Since the fall we are now coping with the realisation that potentially Maddi may never walk again,” her family said. “After the fall Maddi was left on the floor for 40 minutes helpless until an ambulance finally arrived.”

Maddi was rushed to hospital where surgeons performed surgery on the 21-year-old’s back. Her condition has improved significantly over the past week.

Speaking about Maddi’s condition, Karen said: “She’s really well in herself, she’s sitting up, she’s certainly found her sense of humour. She’s actually lucky to be here only for the grace of God and the surgeons.”

The family set up a Go Fund Me page to raise money to cover the costs of Maddi’s medical costs and her journey back to the UK with a specialist team.

They have managed to raise over £75,000 so far, surpassing their original target of £73,500. The family said any additional money raised would be donated to charity.

The funds will help bring Maddi home with a specialist team needed to transport her back to the UK.

Maddi’s family said her lungs are not stable enough to fly without special ICD drains, which help drain excess fluid.

The family wrote on the Go Fund Me page: “To fly without ICD drains the nurses have advised us we will not be able to fly home for one whole year. This is not an option, every single minute here is time taken away from her rehabilitation at home and chance to get the right help to encourage walking again.

“To put it in black and white – ICD drains require a whole medical team at a high cost but no ICD drains means we can’t fly home for 12 months. Any donations will only go on medication and transfer costs.”

The family have since raised over £75,000 after 1,500 people donated to their fundraising page.

“We can’t thank everyone enough for their generosity, well wishes and support. We are eternally grateful,” Karen said.