MOSCOW — The strongman president of Belarus sent a fighter jet to intercept a European airliner traveling through the country’s airspace on Sunday and ordered the plane to land in the capital, Minsk, where a prominent opposition journalist aboard was then seized, provoking international outrage.

The stunning gambit by Aleksandr G. Lukashenko, a brutal and erratic leader who has clung to power despite huge protests against his government last year, drew disbelief among European leaders. But it also underscored that with the support of President Vladimir V. Putin of Russia, Mr. Lukashenko is prepared to go to extraordinary lengths to repress dissent.

The Ryanair flight from Athens to Vilnius, Lithuania, carrying some 170 passengers — among them the journalist, Roman Protasevich, 26 — was flying over Belarus when Belarusian air traffic controllers notified its pilots of “a potential security threat on board” and directed the plane to divert to Minsk, the Ireland-based airline said in a statement.

Mr. Lukashenko, often referred to as “Europe’s last dictator,” personally ordered a MiG-29 fighter jet to escort the Ryanair plane to the Minsk airport, his press service said. According to the statement, Mr. Lukashenko gave an “unequivocal order” to “make the plane do a U-turn and land.”

After about five hours on the ground, the Ryanair Boeing 737-800 was cleared for takeoff with its passengers and crew.

“Nothing untoward was found,” said the statement by Ryanair, a popular, low-cost airline.

But Mr. Protasevich stayed behind. Upon the plane’s arrival in Minsk, Mr. Protasevich was arrested, the country’s interior ministry said in a statement that was later deleted from its official Telegram channel. No bomb was found on board, the country’s law enforcement authorities said. The Investigative Committee, Belarus’s top investigative agency, opened a criminal case into a false bomb threat.

Mr. Protasevich is a co-founder and a former editor of the NEXTA Telegram channel, one of the most popular opposition outlets in Belarus, where most independent media organizations were forced to shut down following large-scale protests that convulsed the nation following a disputed presidential election in 2020.

Over the past few years, Mr. Protasevich has been living in Lithuania in exile, fearing imprisonment in Belarus, his home country, where he is accused of inciting hatred and mass disorder and faces more than 12 years in prison if convicted. In November, the country’s main security service, still called the K.G.B., put Mr. Protasevich on its list of terrorists.

Mr. Protasevich’s arrest demonstrated the lengths to which Mr. Lukashenko is ready to go in order to pursue his political opponents. Many of them have sought safe heaven in exile in Lithuania and Poland, but Sunday’s events showed that Mr. Lukashenko can reach them even in the air.

Both Lithuania and Greece are members of the European Union. Ursula von der Leyen, the president of the European Commission, the E.U.’s executive body, called the situation “utterly inadmissible.”

The prime minister of Greece, Kyriakos Mitsotakis, said on Twitter, “The forced landing of a commercial plane to detain a journalist is an unprecedented, shocking act.” Calling for stepped-up pressure on Belarus, he said, “Enough is enough.”

The action also drew fierce criticism from Lithuania’s president, Gitanas Nausėda, who called it “abhorrent” in his Twitter account and demanded that the Belarusian authorities release Mr. Protasevich.

The Belarusian authorities said they took the action after receiving information about the bomb threat and did so even though Vilnius, the plane’s destination, was much closer than Minsk when it was forced down. Mr. Lukashenko and his government are known to use ruses to pursue their political opponents.

The country’s Defense Ministry said in another statement that the country’s air defense forces were put on high alert. 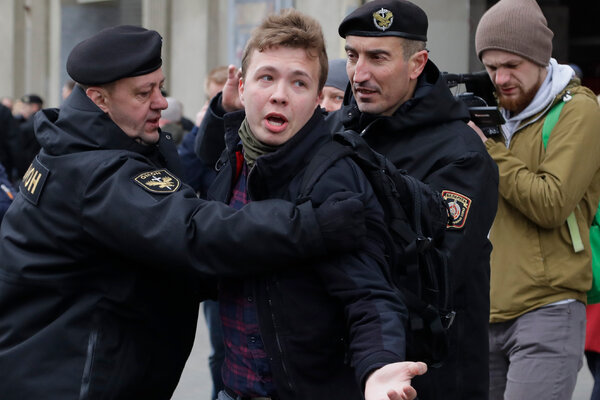 Mr. Protasevich’s arrest comes months after the biggest wave of street protests in the history of Belarus failed to depose Mr. Lukashenko, who has been the country’s authoritarian leader for more than 26 years.

More than 32,000 protesters were arrested and at least four died during the protests. Hundreds were brutally beaten by the police. NEXTA emerged as the leading online outlet coordinating the demonstrations.

Backed by Mr. Putin and using extraordinary violence, Mr. Lukashenko managed to successfully crack down on protesters, with the country’s security apparatus remaining loyal to him.

Svetlana Tikhanovskaya, Mr. Lukashenko’s main opponent during the last presidential election in August, which was widely regarded as rigged, called the episode with the Ryanair flight “an operation by the special services to hijack an aircraft in order to detain activist and blogger Roman Protasevich.”

“Not a single person who flies over Belarus can be sure of his safety,” she said.