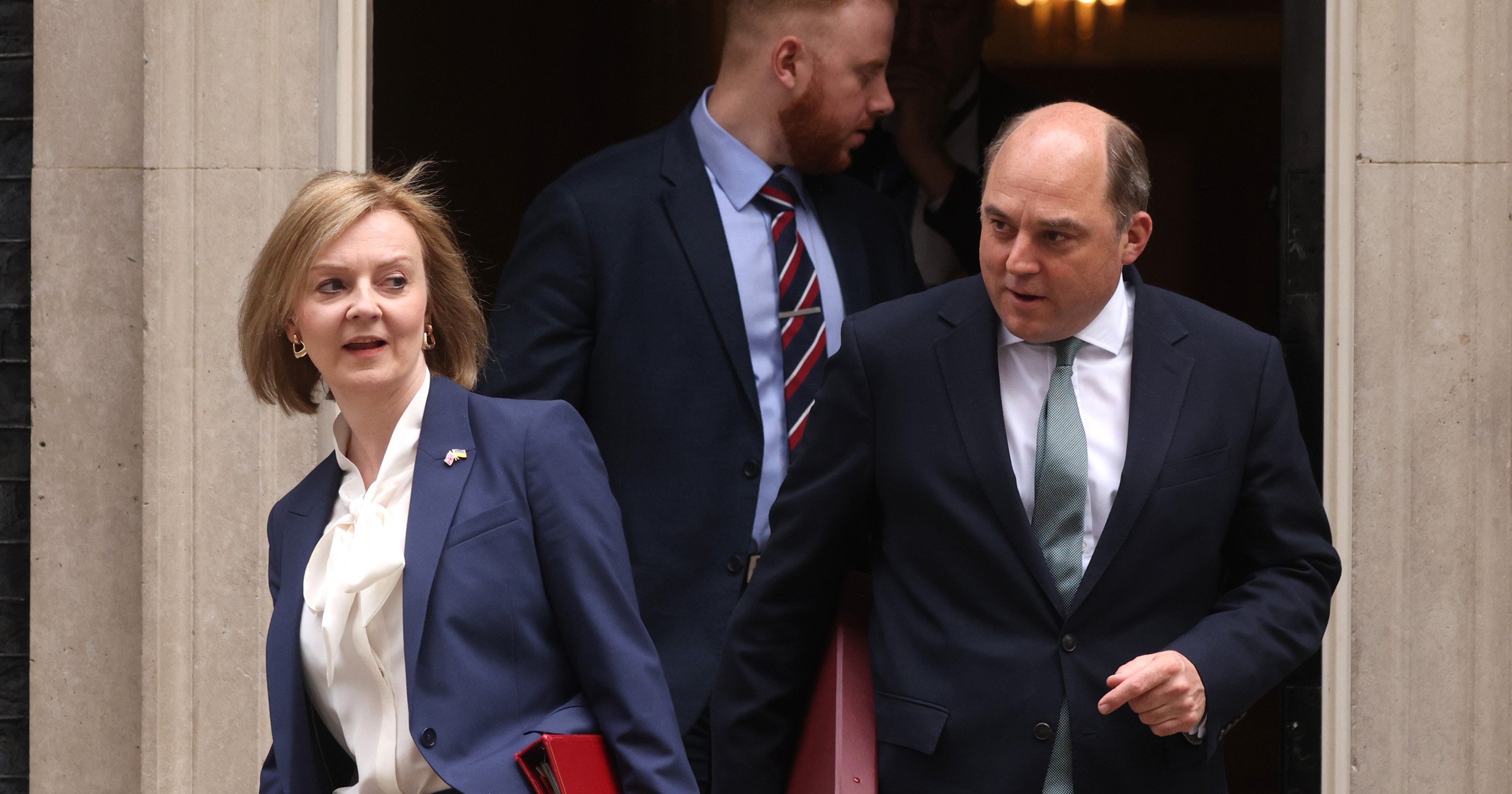 Liz Truss’ Tory leadership bid had a huge boost while her rival Rishi Sunak was accused of ‘walking out the door’ of Boris Johnson’s cabinet.

Defence Secretary Ben Wallace gave Ms Truss his blessing after both candidates faced a grilling in the first official hustings of Conservative members in Leeds.

They were quizzed on a vast array of policy areas – and their predictions for the Women’s Euro 2022 final – as they sought to woo northern voters in the race to Number 10.

The event, hosted by LBC’s Nick Ferrari, was the first of 12 sessions for the party faithful across the country to question the final two contenders.

Voting among party members for the next Tory leader and prime minister closes on September 2.

While they did not address one another directly, tax continued to be a significant dividing line between the pair.

Mr Sunak took a veiled swipe at Ms Truss by saying he would not ’embark on a spree, borrowing tens and tens of billions of pounds of unfunded promises and put them on the country’s credit card’.

She said: ‘I don’t believe in windfall taxes, because they put off future investment.

‘What we should be doing is encouraging Shell and other companies to invest in the United Kingdom, because we need to get our productivity up, we need capital investment.’

But she avoided being pinned down on potential changes to inheritance tax.

‘I think our tax system in Britain isn’t working. It’s too complicated. It’s even more complicated than the American tax system which we know is a nightmare,’ she said.

‘So what I would do is have a complete review of the tax system. I want to make it fairer for families, so if people take time out of work to look after children or elderly relatives they are not penalised. And I would also look at inheritance tax as part of that review.’

The two candidates kicked off the event by making speeches to the audience, with Ms Truss capitalising on her Yorkshire roots.

Referencing her upbringing in Leeds, she said it was ‘fantastic’ to be in her ‘old stomping ground’, adding that she hoped none of her former teachers were in the audience.

She also mentioned her relocation to Norfolk, the site of her constituency, and the fact she has become a supporter of Norwich City FC.

Ms Truss said ‘I do want us to channel the spirit of Don Revie’ – a former Leeds United and England manager – because ‘we need to win’.

‘And, my friends, we can win against Keir Starmer, who is a patronising plastic patriot,’ she added.

Mr Sunak said he was ‘having the time of my life’ campaigning for to become the country’s next leader.

He outlined his vision to tackle NHS waiting lists, ‘grip’ inflation, and ‘restore trust, rebuild the economy, reunite our country’.

The former chancellor acknowledged he was trailing Ms Truss in the polls, but vowed to fight for every vote.

He said: ‘We are going to have to appeal to swing voters in every part of our country.

‘And I believe with all my heart that I am the person, I am the candidate, that gives our party the best opportunity to secure that victory.’

Recent YouGov polling has suggested Mr Sunak has a significant edge over his rival among swing voters.

These include 2019 Tory voters who are deserting the party, even as both candidates are ‘considerably unpopular’ with the public as a whole.

Mr Sunak later denied that his pledge to cut VAT on energy bills was a U-turn, saying ‘it’s reasonable that there is more than we can do’.

He also said he would not support relocating the House of Lords, adding: ‘I don’t think it makes sense for the practical operation of government for us to be separated.’

And he suggested a ‘buyers’ cartel’ where ‘everyone would agree to pay a fixed amount for Russian energy’, to deprive Moscow of ‘revenue that is funding its war effort’.

Ms Truss told the hustings she would return the whips’ office to 12 Downing Street.

She also insisted ‘single sex spaces should be protected’, particularly for young people.

Addressing the Foreign Secretary, an audience member called for a policy that guarantees girls can go to a toilet in a safe environment in any school in the country.

Ms Truss responded: ‘I completely agree with you. I have sought to clarify that as women’s minister I’ve been very clear that single sex spaces should be protected, particularly for young people, as well as… vulnerable women in domestic violence shelters, for example.

‘It’s a difficult time being a teenager, being a young girl, and you should be able to have the privacy you need in your own loo. So I 100% agree with you and I would make that happen.’

Speaking to The Sun, Mr Wallace described the Foreign Secretary as ‘authentic, honest and experienced’ with the ‘integrity’ for the top job.

The Defence Secretary was an initial favourite among Tory grassroots to succeed Mr Johnson as PM.

But he soon confirmed he would stay in his Cabinet position, and stayed in post during a mass exodus of 50 members of the Government earlier this month.

‘I don’t have the luxury as Defence Secretary of just walking out the door — I have roles in keeping this country safe,’ he said.

Mr Wallace also wrote in The Times that Ms Truss was ‘a winner not because she’s a slick salesperson but because she is authentic’.

Away from policy matters, both leadership contenders were asked how they expect the Lionesses to fare in their highly-anticipated clash with Germany at Wembley on Sunday.

Ms Truss said she thought it would be 2-0 to England, adding that she is planning to attend with the German foreign minister, so ‘there’ll be massive egg on my face if that doesn’t come to fruition’.