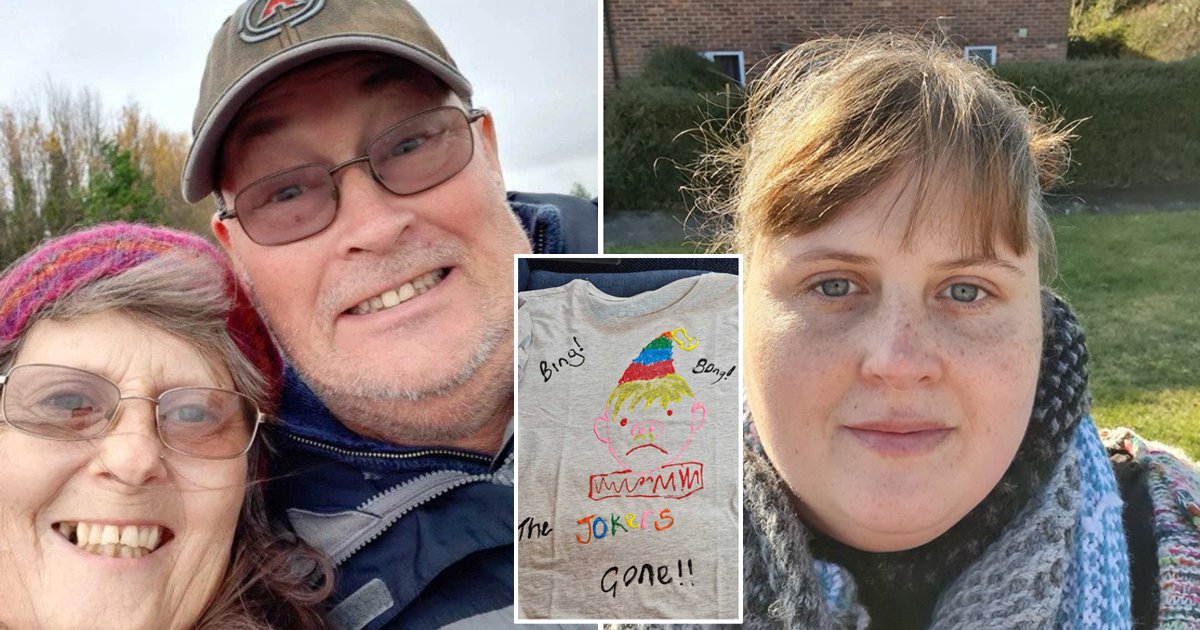 The daughter of a Covid victim is heading to Westminster this afternoon to celebrate the announcement from Boris Johnson that he is quitting as prime minister.

Tiffany Jones has been a vocal critic of how the Tory leader has handled the pandemic, which claimed the life of her dad, Colin Reginald Jones.

She has been campaigning for a memorial day for all victims of Covid and has spoken of her disgust at the series of scandals that mired his reign.

Tiffany, 42, accompanied by her friend, Lorna, is heading to London from Winchester by train in a T-shirt reading, ‘bing bong the joker’s gone’.

She told Metro.co.uk: ‘While Boris has done a few small things reasonably well, in all reality he has lied and broken the trust of the British public time and time again. He has been ultimately responsible for the deaths of more than 170,000 people. He absolutely does not deserve to be in office.

‘The prime minister has been fined for breaking the very laws that he has asked the rest of us to make huge sacrifices to adhere to.

‘He is not fit to run government, he is a liar and a cheat.’

Ms Jones, from Winchester, Hampshire, has previously told how she cradled her 61-year-old dad and ‘whispered everything he wanted to hear’ during a tearful final farewell as he took his last breaths in hospital.

She told Metro.co.uk that she planned to celebrate outside Downing Street, where Mr Johnson announced his departure today.

‘We might bring a few bottles of wine and a cake,’ Ms Jones said.

‘We are going to celebrate the fact that we said we were going to get him out, and it’s happened.’

Mr Johnson announced this afternoon that he will stay in post to allow a leadership contest to take place before his successor takes over in October.

His exit follows the rapid collapse in his administration, with more than 59 ministers and aides quitting since yesterday. Amid the scandals and sleaze allegations that have dogged his premiership, the families of people who have lost their lives to Covid have been a constant voice of opposition.

Lobby Akinnola, spokesperson for the Covid-19 Bereaved Families for Justice campaign, said: ‘Boris Johnson’s legacy is the deaths of nearly 200,000 British people on his watch.

‘He will be remembered as the prime minister who failed to act when Covid-19 began ripping through the country, who allowed our hospitals to become overwhelmed, left our care homes defenceless, and had to put the country in lockdown for nearly a year to salvage the situation.

‘Whilst Johnson will move on to a life of writing newspaper columns and being paid eye watering amounts for after dinner speeches, there will be no moving on for families like mine that have been ripped apart by his actions.

‘For us, Johnson will always be the man that wanted to “let the bodies pile high” whilst our loved ones desperately fought for their lives and who partied whilst we had to say goodbye to our loved ones over a screen.

‘Although his reign will shortly be coming to an end, his devastating impact on families like mine will not.

‘We can only hope that the Covid inquiry will bring some closure for us, teaching us the lessons that will save lives in the future and meaning that no one will be able to repeat Johnson’s terrible mistakes and get away with it.’

Mr Johnson received a fixed penalty notice from the Met Police for attending his birthday celebration in the Cabinet room two years ago.

He has previously responded to criticism of his record on Covid by saying ‘at every stage, we’ve been governed by a determination to protect life, to save life’. The leader, along with his party loyalists, has repeatedly cited the vaccine roll-out as one of his administration’s biggest triumphs.

Announcing his exit, he said it had been the ‘fastest roll-out in Europe’ and listed ‘getting us all through the pandemic’ among his achievements.