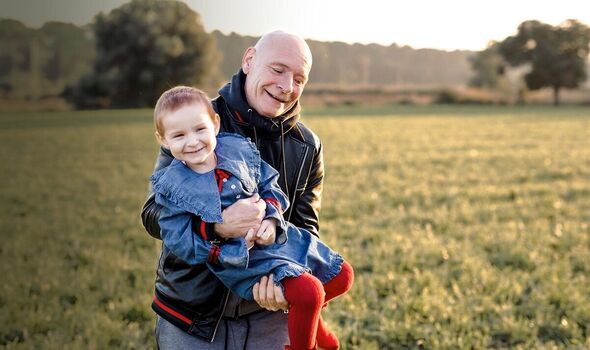 Seven-year-old Isla Caton died in January last year after a heroic five-year fight. She and her family had just celebrated a special “60-day Christmas” to make the most of the final days she had left.

Heartbroken dad Michael Hook, 52, set off on the epic journey from his home in Hornchurch, Essex, on December 22. He completed the drive to Marrakech in his yellow Saab 93 on New Year’s Eve.

Michael, who is now separated from his wife Nicola, 44, said: “Isla fought so hard to survive. We need more research and awareness into this awful cancer as it destroys lives and families.”

Isla was diagnosed with neuroblastoma in March 2017, when she was just two years old.

Neuroblastoma is a rare type of cancer that affects around 100 children a year in the UK.

Michael, an IT support analyst, said: “She was poorly for three months before being diagnosed.

“We kept taking her to the doctors. She had a temperature, was crying a lot and had very painful legs. She stopped walking, talking or eating as she was in that much pain.

“The GP said it was a virus but we paid for a private appointment and 10 days later were told she had a tumour on her adrenal gland.

“We were told that she only had weeks to live as the cancer was in 98 percent of her body.”

Isla immediately started chemotherapy and in July that year her parents were told she was free from it. But then it came back in her brain and they were told no more could be done.

Undeterred the family raised £400,000 for more treatment in Barcelona and Isla was given the all-clear, but the cancer returned once again.

“She was so brave throughout it all and that’s why I’m doing this drive – to honour her life and fundraise to help research into this cancer.

“I want there to be a cure so no more families suffer the heartbreak and loss we have.”