Boris Johnson and Carrie Symonds look smitten on their wedding day – after a ceremony so secret even his closest aides were caught off guard. Twelve months after Covid almost killed the Prime Minister, he and his girlfriend married in a surprise wedding at Westminster Cathedral. Pandemic restrictions meant just 30 people, including close family and friends and two official witnesses, saw the union between Boris, 56, and Carrie, 33, on Saturday.

But yesterday the newlyweds promised those unable to attend that there will be a celebration after their honeymoon next summer. The marriage – Mr Johnson’s third – comes 18 months after their engagement and 13 months after son Wilfred was born.

A source said: “They are both absolutely thrilled. The whole thing has been conducted amid great secrecy and planned meticulously. It was just their secret and that made the day so special.”

Mr Johnson, sporting a new haircut, was immaculately dressed in a fitted dark blue suit, white shirt, blue tie and white rose buttonhole. The event was planned over Christmas but caught most by surprise, coming just six days after the couple sent guests save the date cards for July 30, 2022. 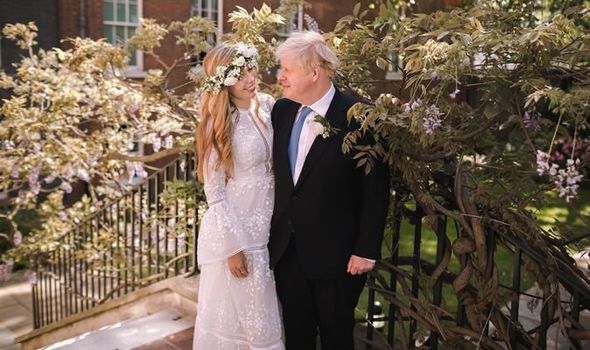 Carrie has taken her husband’s surname and will be known as Mrs Johnson.

A picture issued by Number 10 showed them in the Downing Street garden, where the reception was held.

Another posted by Foreign Office Minister James Cleverly revealed a more relaxed PM with his jacket and tie off and sleeves rolled up. His new bride had discarded her shoes to go barefoot on the grass.

Their reception guests included little Wilfred, their beloved Welsh rescue dog Dilyn, Boris’s father Stanley, 80, and siblings Rachel, 55, Leo, 53, and Jo, 49. Earlier, Carrie shared a picture of their son in a field of bluebells – a nod to the tradition of something blue.

A marquee was set up in the No 10 garden, which also featured bunting, hay bales and tables with jugs of cocktails. 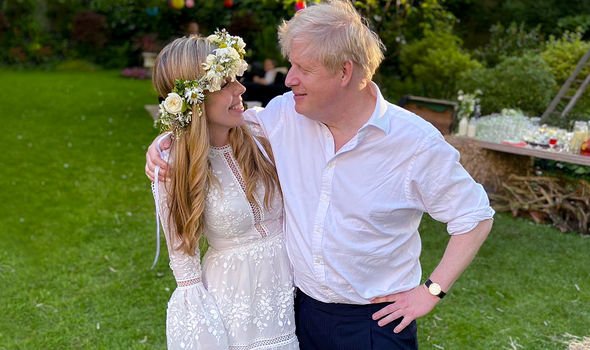 Guests tucked into a ­buffet-style wedding breakfast, with waiting staff taking dishes to them to pick from.

Weddings in England are ­still subject to strict restrictions with ceremonies permitted for up to 30 people in Covid-secure venues.

Dancing is advised against due to the increased risk of transmission, except for the couple’s traditional first dance.

Rules dictate that wedding guests and staff have to wear face masks, except when eating or drinking or where exemptions apply.

Those celebrating do not have to be on socially distanced tables, but should be served food and drink while seated.

Mr Johnson had been taken to St Thomas’ Hospital in London on April 5 last year – 10 days after testing positive for Covid – and was later moved to intensive care.

Wilfred was born on April 29, just 17 days after the PM was discharged. Boris and Carrie were the first unmarried couple to live in Downing Street, after moving in together in
July 2019. At the end of that year they got engaged on the Caribbean island of Mustique.

The ceremony meant he became the first PM to marry in office since Tory Lord Liverpool, who helped popularise long trousers for men, in 1822,

Saturday’s wedding took most politicians by surprise, but Labour leader Sir Keir Starmer said: “Whatever our political differences I wish them a happy life together. Congratulations to Boris and Carrie.”