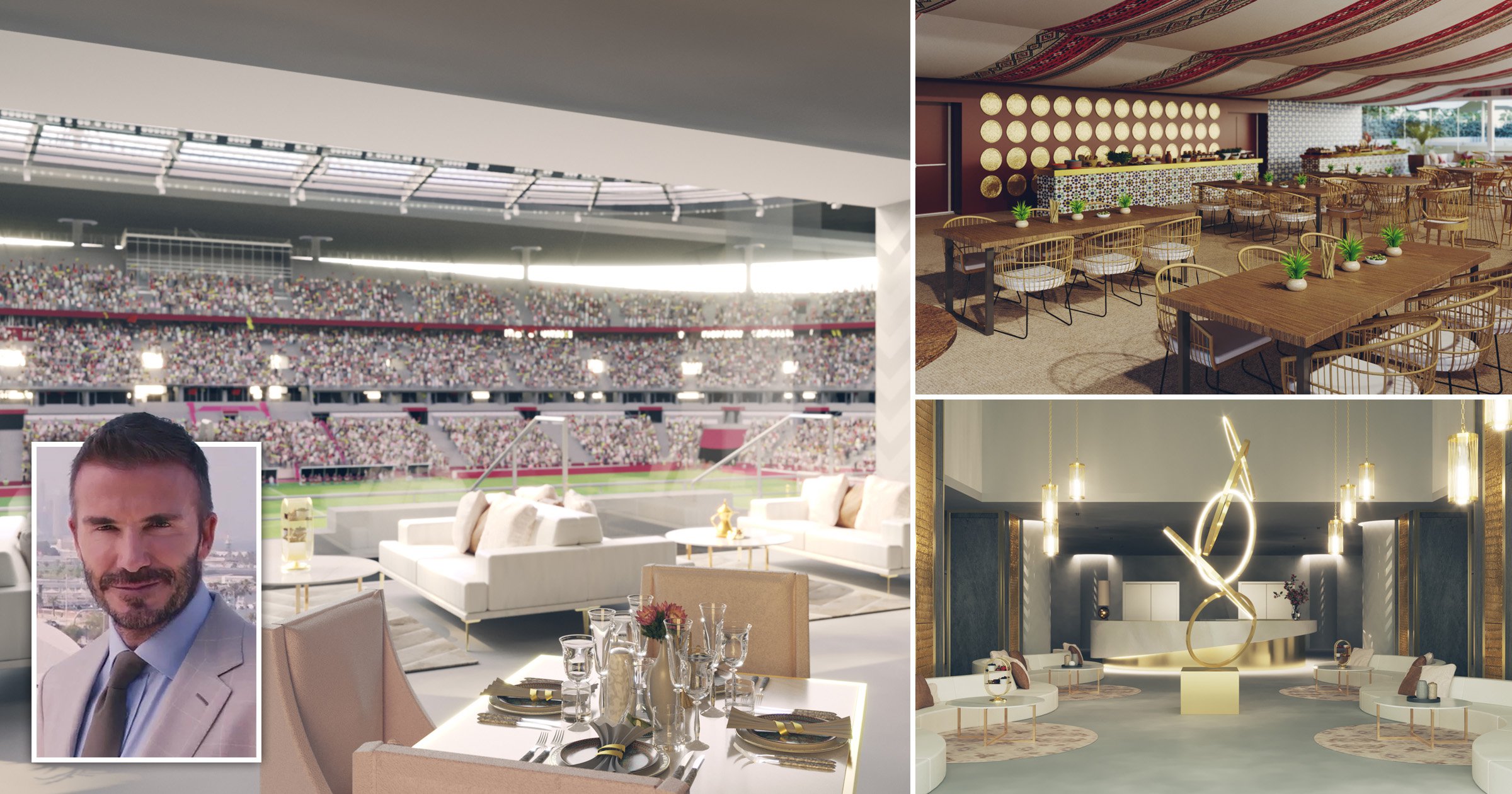 A hospitality suite at the Qatar World Cup has been sold for £2.1 million as wealthy spectators buy prime spots at the games.

The large private box traded hands through hospitality packages that went on sale months before tickets went on general release.

The high-end hospitality has been purchased at the Lusail Stadium, where 44 people will be entertained in luxury this winter.

The purchase can be revealed in the week that David Beckham lavished praise on Qatar in a new promotional video.

The former England skipper described the country as ‘incredible’ and said he ‘can’t wait’ to take his children back.

He has lent his image to the oil-rich Gulf state despite continued concerns over its human rights record.

Filmed at tourist destinations, Beckham, 47, is likely to be among celebrities, executives and billionaires who will receive the red-carpet treatment at the Fifa games in November.

The VIP area, which has a gold-coloured finish, will be used for a ‘venue series’ that includes 10 games culminating in the final.

The Private Suite appears on the sales list published by MATCH Hospitality, which is Fifa’s exclusive sales agent for hospitality.

A spokesperson for the agent said: ‘Just like an aeroplane has economy, business, and first classes, we have a range of hospitality products designed for a range of clients, from the super-luxurious to the casual and relaxed.

‘These types of hospitality products give people a way to guarantee their access to the game, with additional benefits, whether they are booking a family-friendly lounge, or hosting their VVIP guests in an exclusive suite.

‘They are not the only way, or price point, to be in the stadium and enjoy this once-in-a-lifetime tournament.

‘Additionally, the specific suite you mention is the largest in Lusail, and private suites are sold on a “venue series” basis, which means the price includes all the matches taking place in a specific stadium.

‘In the case of Lusail, each Private Suite includes 10 matches, including the final match of the tournament.’

The suite is the most expensive available in the list, with prices based on size and location. The lounges come with a ‘curated five-course sampling menu’ and an in-suite HD television, with direct access to seats directly outside the glass frontages, according to the sports experience provider.

An even dearer and more luxurious class of hospitality suite, which is only available at the Lusail Stadium, is the Pearl Lounge.

Located on the halfway line, the area is advertised as having ‘impeccable service’, including a dedicated concierge, and a six-course ‘gastronomic showcase’ with ‘à la carte options, signature dishes and live chef stations’.

Prime views will be afforded of the 80,000-capacity arena, the biggest in Qatar, which is due to host the final on December 18.

In its promotional material, MATCH says: ‘This is the most luxurious commercial lounge at the Fifa World Cup. It is the first thought and the final word in the story of luxe sporting hospitality.’

Millions of pounds have already been splashed on corporate boxes, the order form shows, with a matter of weeks to go before the opening ceremony and first group game on November 20.

Qatar’s hospitality offers are being snapped up despite concerns about human rights, including the treatment of workers who were involved in building or redeveloping the eight stadiums.

More than 6,500 are said to have died since the World Cup was awarded a decade ago, according to a report by The Guardian.

In May, the authorities took steps to protect the workers from the extreme heat and they have said that the mortality rate is within the expected range given the workforce size.

Gay people and women are also said to suffer from discrimination in the wealthy state, where same-sex relations are illegal.

In October, Beckham drew criticism from human rights campaigner Peter Tatchell after the former Manchester United star become an ambassador for the World Cup in a reported £150 million deal.

A spokesperson for the global figurehead responded by saying that he has ‘always talked about the power of football as a force for good’.

Early signals by the hosts had suggested fans would be able to raise rainbow flags and express LGBTQ+ identities, at least inside the stadiums.

But the overtures were followed by a crackdown on children’s toys with colour schemes similar to the Pride symbol and comments by a senior Qatari official that security staff could intervene to stop expressions of support in order to protect fans’ safety.

Anticipation around England’s shot at history ratcheted up in July 2022 as the Three Lions were drawn with Iran, the USA and Wales in Group B.

Earlier this month, Fifa said that a total of 2.45 million tickets had been allocated for the 22nd World Cup.

The date of a last-minute sales phase will be announced at the end of this month, according to Fifa.