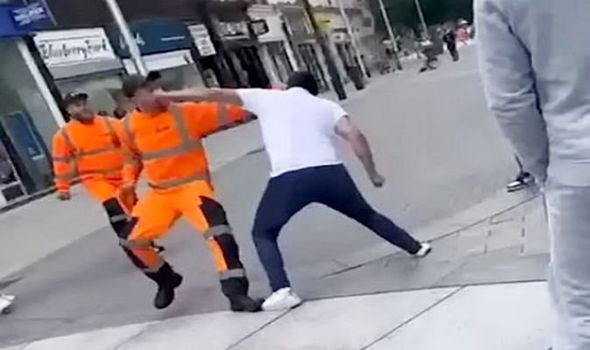 Binmen caused chaos in Chatham, Kent on Monday evening. Horrified witnesses said the men were hurling abuse at passers-by and throwing chairs. The fight escalated and one worker was knocked unconscious.

Moments earlier the two men were seen by shocked onlookers running down the High Street, with one swinging two pub chairs and shouting aggressively.

A bystander said one of the workers had been knocked to the floor but got back to his feet with blood dripping from his mouth and began screaming threats at passers-by again.

Another witness said the binmen were throwing the outdoor chairs at random people as the terrifying scenes escalated.

Alicia Martin, who had been walking through the town centre at around 5pm when the fight started, said it had been a frightening experience.

She said: “I was walking down the High Street and the next thing they were taking chairs from outside Wetherspoons and trying to throw them at people.

“Everyone started running up the road, they grabbed chairs and were trying to throw them at everyone – even at me and the boy I was with.

“I was saying get away. It got to the middle of the High Street, and one of them got knocked out. I was like ‘what the hell?’.

“Straight afterwards the man got off the floor and started saying that he would have anyone. He kicked the metal barrier outside a shop.

“I don’t know why it started – everyone just started fighting. It was worrying – there were girls with prams and he’s throwing chairs about.”

A staff member from a nearby business also said the men had grabbed chairs from the Thomas Waghorn pub in a nearby street, but added: “We didn’t see all of it. They just rolled past here. They were fighting up near Halifax.”

Medway Norse, the Medway Council-owned company that runs bin collections and street cleaning in the area, confirmed the men have been dismissed from their roles, and the firm is helping with police enquiries.

Andy Mann, operations director for Medway Norse said they were “appalled” by the shocking footage.

He said: “We are absolutely appalled at the behaviour of the individuals involved in this incident and, while this took place outside of the working day, behaviour of this kind – particularly while representing Norse by wearing our uniform – will not be tolerated.

“We have taken immediate action and the individuals have today been dismissed from any role they held with us.

“As we are also supporting the police investigation into the matter, it is inappropriate to comment further other than to say that, at this point in time, we understand that this incident centred around a family dispute.”

Kent Police confirmed they were called at 5.11pm on Monday to a report of a disturbance in Chatham High Street.

A spokesman for the force said officers attended but the offenders had already left the area and no suspects were identified.