Rescue centres have issued an urgent warning over the dangers of extreme temperatures, which increase the likelihood of fires, on the country’s wildlife. The RSPCA (Royal Society for the Prevention of Cruelty to Animals) said hedgehogs, baby birds, fox cubs and grass snakes were all seriously stressed from the heat, with several deaths due to the harsh weather conditions.

Evie Button, scientific officer in the wildlife department at the RSPCA, said: “Our emergency call centre has many more calls than usual.

Dominic Buscall, project manager at Norfolk’s Wild Ken Hill reserve, said: “I saw some birds flying back into the flames. I think the maternal instinct is quite strong.

“I’m concerned about it happening again this year. It’s incredibly dry, we have no rain forecast this week and it’s only mid-July.”

Wild Ken Hill witnessed some of the worst of last week’s heatwave, as 33 hectares of thorny scrub went up in flames, with nesting territories of turtle doves, grasshopper warblers and reed warblers destroyed. 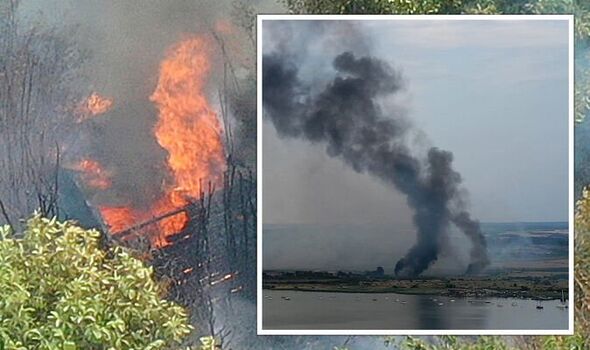 Reptiles and amphibians would have burned, while most birds would have escaped – apart from those nesting late in the season, experts said.

Emphasising the extent of the damage from temperatures that in some areas of England hit the 40C-mark, the RSPCA said there were reports of swifts falling out of the sky in London.

Ms Button said: “Often you don’t see the impacts of something like this directly because the nature of wildlife is to hide away when they’re sick or injured.

“It’s often only when they’re in a really bad state that people will see them and call us. So a lot of the impact will be hidden.”

Conservationists fear record-breaking temperatures could cause a further collapse in insect numbers, with bumblebees and butterflies among those most affected.

The UK’s recent extreme heat was far more intense and widespread than previous comparable heatwaves, the Met Office said on Friday, adding that it had been forced to issue its longest-range Amber warning ever, with a lead time of six days and a subsequent Red warning for extreme heat; the first such one to be issued.

The Met’s Mike Kendon said: “Temperatures on July 18 were exceptional but they moved 2 to 4°C higher on July 19, making this date unprecedented in the context of long-term climate records.

“What’s particularly notable is how much more widespread the heat was from this event than the previous two occurrences of temperatures in excess of 38°C in the UK.

“Temperature records tend to get broken by modest amounts and by just a few stations, but the recent heat broke the national record by 1.6°C and across an extensive area of the country from Kent to North Yorkshire and from Suffolk to Warwickshire.

DON’T MISS
Buckingham Palace urged to open all year to pay for £369m refurb [INSIGHT]
Should Boris Johnson be given a cabinet position under new PM? [POLL]
Ukraine vow to recapture and ‘liberate’ Kherson by September [REPORT]

Mr Kendon added: “Even when you factor in the temperatures seen in summer 1976, they didn’t reach anywhere near the levels seen this week, although that was a much more prolonged spell of hot and dry weather.”

A study published in June in the journal Environmental Research: Climate concluded it was highly probable that climate change was making heatwaves worse.

Study co-author Ben Clarke, an environmental scientist at the University of Oxford, said: “Pretty much all heatwaves across the world have been made more intense and more likely by climate change.”

In general, a heatwave that previously had a one in 10 chance of occurring is now nearly three times as likely — and peaking at temperatures around 1C higher — than it would have been without climate change, the researchers found.

Co-author Friederike Otto, one of the climatologists leading the international research collaboration World Weather Attribution (WWA), added that heatwaves across the Northern Hemisphere in June — from Europe to the United States — highlight “exactly what our review paper shows … the frequency of heatwaves has gone up so much”.

The paper highlights that heatwaves and drought conditions are significantly worsening wildfires, particularly megafires – those that burn more than 100,000 acres.