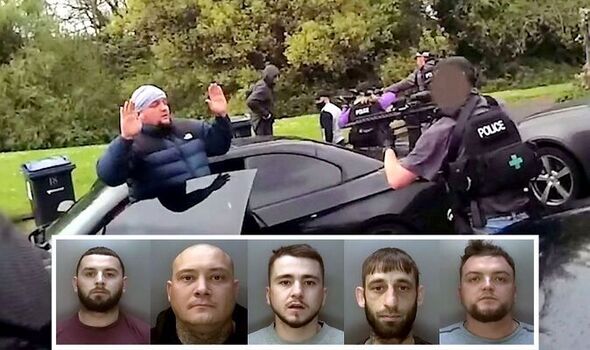 Dramatic footage captures National Crime Agency officers as they begin the operation by boxing in the five men in their BMW.

Officers are heard shouting: “Armed police – stay where you are, on the ground! Get on the floor now! Put your hands in the air. Keep them there!”

After bundling one suspect from the car, another orders: “Get out, stay there, on your belly! Put your hands behind your back. Don’t move.”

Carl Brookes, 38, Richard Davis, 36, Callum Meah, 26, Jordan Feeney, 28, and Robert Clark, 32, all from Birmingham, were detained in the city’s Kings Norton district in May.

Officers recovered a loaded handgun, ammunition, knives and sledgehammer from the gang, who were “dressed up and kitted out to do some harm”.

The men received jail terms of five to seven years at Birmingham Crown Court on Thursday.

Clark also admitted having an offensive weapon – a knife found in his pocket.

Mick Pope, Birmingham’s National Crime Agency commander, said: “They had a loaded gun, ammunition and an array of weaponry when they were arrested.

“There is no doubt in my mind that these men were dressed up and kitted out to cause somebody, somewhere, some harm.

“It is only the intervention of NCA officers that prevented this from happening.

“Taking such weapons off the streets of the West Midlands remains a priority for the NCA and our partners.”