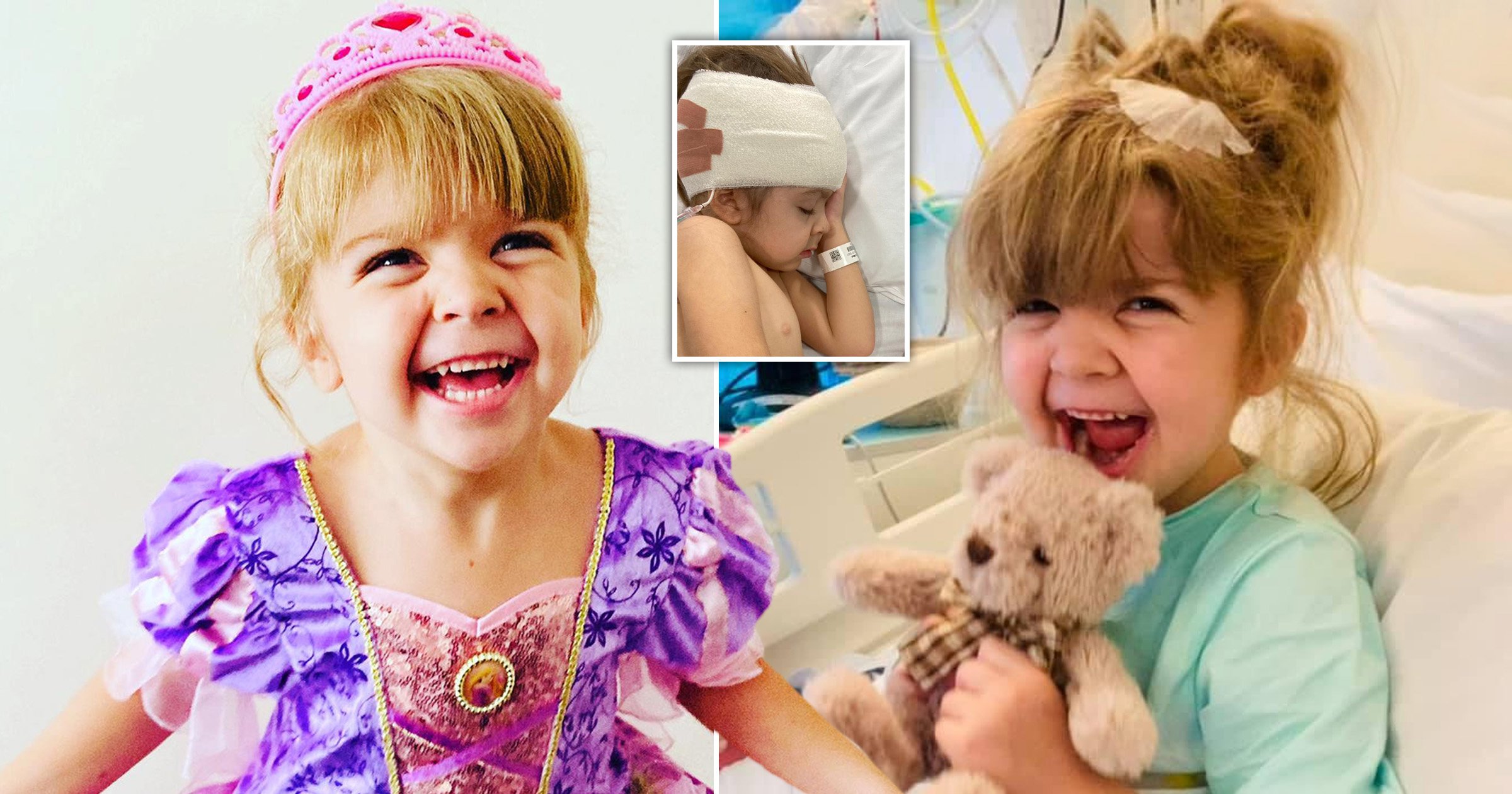 A blind girl has stunned doctors by ‘curing herself’ of a normally life-long brain condition – and she is now top of her class after a miraculous recovery.

Evie-Mae Geurts, seven, was registered blind at just a few months old – shortly before her head started to swell.

At eight-months-old, doctors diagnosed her with hydrocephalus – the build-up of fluid in the ventricles deep within the brain.

Experts calculated that the pressure inside her head was 32 times normal levels, and doctors warned that though they could offer some pain relief and ease the build-up, the damage to her brain was permanent.

Mum Amy, 28, says she was told that the continued pressure meant her sight would be lost forever, and that the Bristol youngster was unlikely to ever learn to walk and talk.

But after a series of brain operations – including having needles prodded through her skull – Evie’s sight has now returned against all the odds.

She has also learnt to walk and talk – and last year her hydrocephalus mysteriously disappeared.

The condition is normally considered incurable and life-long.

Evie did have shunts put in to drain fluid from her brain to the bladder, but that normally only alleviates the problem.

Now she can see perfectly without glasses and is amazing school teachers with her progress.

‘The doctors admitted because of a delay in diagnosis, they weren’t sure what would happen. They didn’t know if she’d ever be able to see or walk or talk.

‘Now, she’s living shunt free, talking, walking and she’s ahead of her age in learning.’

Amy, who is married to 49-year-old quarry operative Martyn, continued: ‘They can’t understand – she was globally delayed and now all of a sudden, she’s very forward.

‘She’s an amazing little girl, and so brave.’

Evie was first taken to Bristol Children’s Hospital after a bad cold left her with red eyes in 2014.

A torch was shone into her eyes and doctors found no visual responses, and said she was blind.

With her daughter’s head continuing to swell, Amy repeatedly raised concerns with medics that she could have hydrocephalus.

She explained: ‘I knew of hydrocephalus because my brother has it, and I thought that might be why she had no vision, but I was told I was wrong because she was a smiley baby.

‘Even though she was pulling her hair out, I was told that if she did have hydrocephalus she’d be worse.’

Then Amy turned to her brother’s neurosurgeon for help and they confirmed her fears.

Amy claims she returned to the hospital in April 2015 with the diagnosis, and refused to leave until Evie was seen – waiting ten hours in A&E.

Evie was checked and they were finally told that a soft spot was full of fluid.

She had surgery the next day.

Amy said: ‘When she came out of theatre, the doctor said it was lucky that I brought her in when I did because she had really high pressure in her brain.

‘It’s such a horrible pressure. The pressure in your brain should be at zero, and on a bad migraine, it’ll be five, and Evie’s was 32 and higher when they measured. 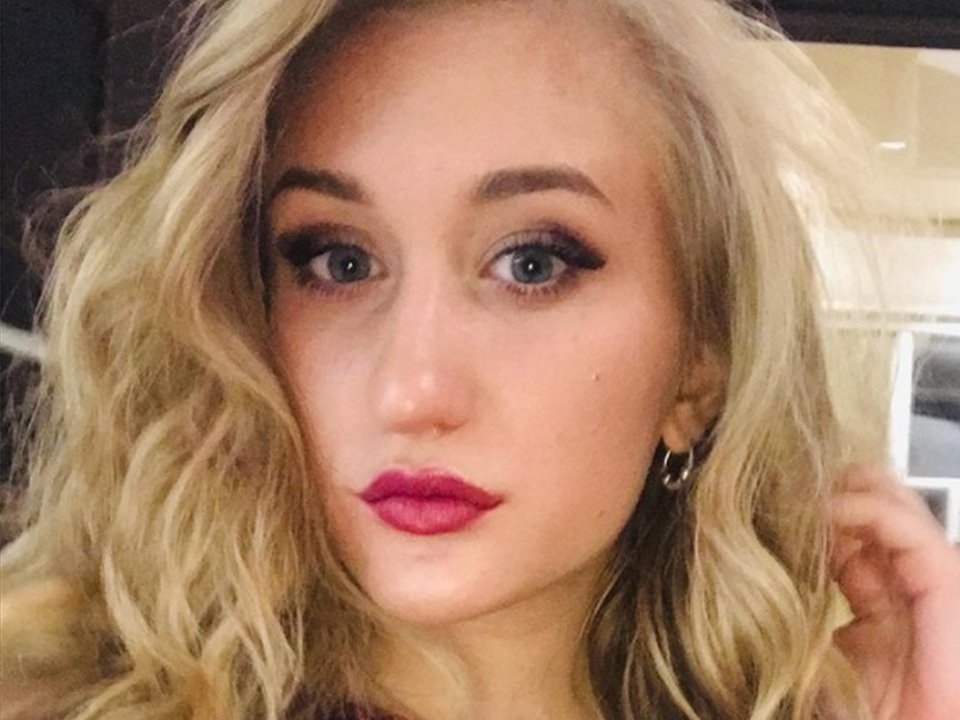 ‘She could have died.

‘They said there was a chance that she could never walk or talk because a delay in diagnosis can prevent children from being able to walk or talk. I was devastated.’

Evie returned home and over the next year, she slowly started to gain vision as the shunts worked to drain the pressure from her brain.

Amy says that is highly unusual for a child who was left untreated for such a long time.

Evie began walking at two years old and after learning a signing language, Makaton, she even started to speak.

The doctors admitted (that) because of a delay in diagnosis, they weren’t sure what would happen’, Amy explained.

‘They didn’t know if she’d ever be able to see or walk or talk.’

But after her miraculous recovery, Evie started getting headaches again in April 2019 and doctors had to drill through her skull to put in a needle.

The pressure was 40 times the expected amount, and it turned out her shunt was blocked, so she was fitted with a new one.

Amy recalls: ‘The scream she let out when they removed the needle… I’ll never forget it.’

In January 2021, the headaches returned – but medics unexpectedly discovered that was because the shunt was no longer needed – and was instead ‘splitting’ the no longer pressured ventricles.

Amy said: ‘The doctor couldn’t believe it – he thought we’d be in and out of hospital every few years because the shunts kept blocking, but it turned out that somehow she’d cured herself!’

Doctors decided to remove her shunts in a risky procedure which went ahead successfully.

But Evie contracted viral meningitis and had to be hospitalised for four more days.

Yet now she is fully healthy and only has to undergo eye tests every six months to monitor her progress.

Metro.co.uk has contacted the trust which runs the hospital for comment.