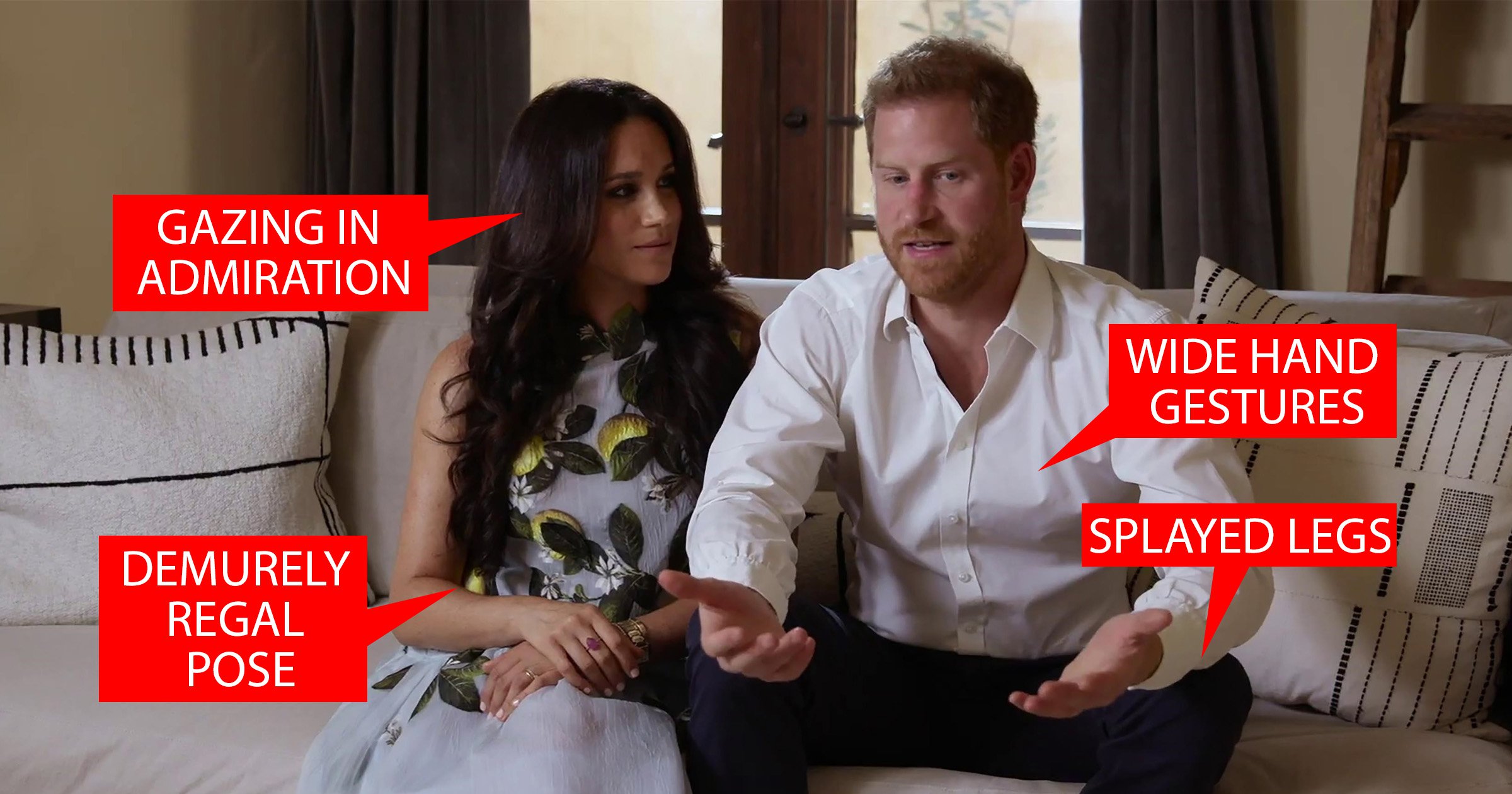 A body language expert has claimed Prince Harry is taking a ‘more dominant role’ after looking at a video of him and Meghan Markle being interviewed.

Judi James said the couple had a ‘US-style polish’ and that the Duchess of Sussex was taking on a ‘demure’ and ‘softer’ role, after watching a video of the pair promoting their latest podcast in their first joint appearance since being stripped of their royal duties.

She claimed there was ‘a new emphasis on making Harry look like the more dominant alpha male while Meghan sits demurely beside (him), gazing in admiration.’

Ms James told Femail that Meghan was adopting a ‘demurely regal pose’ while Harry’s body language looks a lot more ‘American’, with his ‘wide hand gestures and his energetic delivery.

‘There is almost a switching of delivery styles from these two, with Meghan adopting a much more UK royal style of pose with her hands folded over one another on her lap as she sits close to her husband,’ she said.

The couple were appearing at a virtual event on Monday to plug their Archewell podcast, named after their son, which is part of a rumoured £30 million deal with Spotify.

Ms James suggested that their previous appearances over the last year or so had seen the Duchess take a more dominant role, which she said changed in this short clip, based on 12 seconds of video of the couple.

She explained: ‘In earlier appearances it was often Harry squeezed down one end of the sofa while Meghan addressed the camera and led the conversations.

‘Here she seems to take a much softer role to create the impression that it is Harry who is the star turn.’

The rest of the interview is yet to be published.

It comes after the Duke and Duchess were told they could never return as working royals and that the Queen had stripped them of their royal patronages and Harry of his honorary military roles.

Megxit’ was finalised in a 12-month review last week when Buckingham Palace.

In a statement thought to have been taken as an insult by the couple, the Palace said: ‘In stepping away from the work of The Royal Family it is not possible to continue with the responsibilities and duties that come with a life of public service.’

Harry and Meghan replied: ‘We can all live a life of service. Service is universal,’ prompting accusations they were being disrespectful to the Queen.

It was not immediately clear if the Duke and Duchess of Sussex’s video was recorded before February 14, when they announced they were expecting their second child.

In the clip released by Spotify, the couple say they are ‘using podcasts to drive powerful conversations that inspire, challenge and educate’.

Meghan explains: ‘We created Archewell Audio to make sure that we can elevate voices that maybe aren’t being heard, and hear people’s stories.’

Harry then adds: ‘And the biggest part of this is trying to create this community of where you can share. We encourage everybody else to then share their own vulnerabilities within that safe space.’