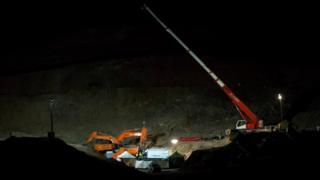 Rescuers in Spain have found the body of a two-year-old boy who fell into a borehole near the southern city of Málaga, officials say.

The boy, named Julen, disappeared into a narrow well more than 100m (330ft) deep during a family outing on 13 January.

Specialist teams worked day and night in a tunnel that had been dug parallel to the narrow borehole.

The body was found in the early hours of Saturday morning.

“At 01:25 (00:25 GMT), the rescue teams reached the area of the well where they were looking for Julen and they found the lifeless body of the little one,” said Alfonso Rodriguez Gomez de Celis, the central government representative in the region of Andalusia.

The accident happened during a Sunday afternoon excursion in a hilly plantation near the village of Totalán.

The borehole – only 25cm (10in) in diameter – had apparently been left uncovered, although the businessman who had originally had it dug a month earlier insisted that he had sealed it.

Such shafts are dug in the hope of extracting water or oil.

Rescuers had found hair among debris removed from the well and compared it with DNA samples from the boy’s drinking bottle as well as his family, confirming his identity.

A small bag of sweets was sent down the hole, tracked by a camera, but at 73m (240ft) the camera encountered an earth blockage in the shaft.

Rescuers had not picked up any hopeful sign from the boy during the whole operation.

Julen’s parents José and Victoria have experienced tragedy before.

Residents of El Palo, a nearby district, say the couple’s three-year-old son, Oliver, died suddenly less than two years ago because of a heart problem.