Bolton has become a hotspot for the new coronavirus variant first identified in India earlier this year, with case numbers rising rapidly as lockdown restrictions ease. The Scientific Advisory Group for Emergencies (Sage) concluded there is a “realistic possibility” the strain is 50 percent more transmissible than the one that emerged in Kent.

The situation appears to be getting worse, as this morning Health Secretary Matt Hancock said five people who have had a single jab have been hospitalised with the Indian variant, and one who had received both.

He told The Andrew Marr Show: “We think that there are five people who have ended up in hospital having had one jab.”

Asked about people who have received two jabs, he said: “We think there’s one person, but that person was frail.

“A small number have had one jab and then there’s one case where they’ve had two jabs and they’ve ended up in hospital and they were frail.”

Asked if anyone had died with the Indian variant after receiving two jabs, Mr Hancock said: “Not that we’re aware of.” 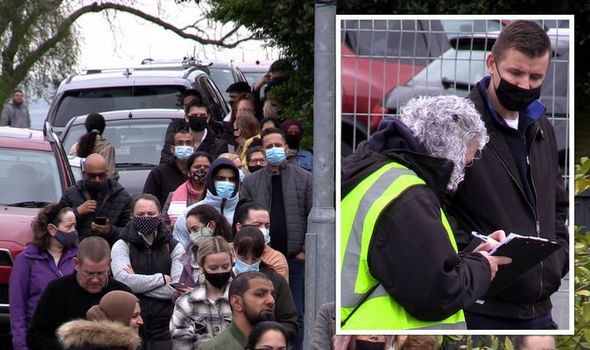 Councillor Andy Morgan tweeted an invite to locals of all ages to visit Bolton’s vaccine bus.

In the tweet Mr Morgan said that the vaccine team would “find a reason” to give attendees the jab.

He said: “Anyone with a Bolton Postcode & registered with a Bolton GP can visit the vaccine bus at the @EssaAcademy vaccination site and #GetVaccinated”.

Mr Hancock also said so-called “surge vaccinations” are forming part of the Government’s response to the growth of the Indian virus variant in Bolton.

“And also this coming week we are going to be opening up vaccination to the 35s and over across the country because this isn’t just about accelelating the vaccination programme in Bolton it’s about going as fast as we can nationwide.”

Mr Hancock also reiterated points made by Professor Chris Whitty in the Downing Street press conference this week that the India variant will likely become the dominant variant in the UK.

He continued: “It’s quite likely that this will become the dominant variant…but the good news is that because we have increasing confidence that the vaccine works against the variant the strategy is on track – it’s just the virus has just gained a bit of pace and we’ve all got to be that much more careful and cautious.”