Two days after the death of Queen Elizabeth II on September 8, her grandson, Prince William released a heartfelt statement where he told the world how much he would miss his “Grannie”, but told how “grateful” he was to have known her. The late Monarch and Prince William had reportedly grown even closer in the months before her death – evidently, their close bond has always been there as incredible video and pictures show an intimate moment between the pair 16 years ago, even amongst the pomp and circumstance of royal duty.

After graduating from St Andrews University — where he met Kate Middleton — with a degree in Geography, Prince William went to the Royal Military Academy Sandhurst as an officer cadet.

Then, in December 2006, the then 24-year-old graduated as an army officer which involved a royal display of parade-ground skills in a traditional military rite of passage.

Prince William’s then-girlfriend, Kate Middleton, came to the ceremony held at the Royal Military Academy in Camberley and watched on with pride. This was her first public appearance alongside the Royal Family.

It was also attended by other members of the Royal Family, including Prince Philip and Prince Charles with Her Majesty being involved in some of the proceedings.

The heir apparent was inspected by his grandmother during the Sovereign’s Parade, and this was when the pair shared a special moment. A video of the moment was shared on Twitter this week, under the caption: “What a lovely moment.” 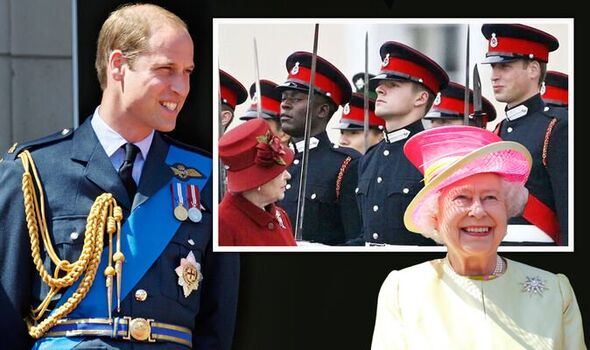 Initially, Prince William was, like his fellow cadets, composed as both his grandmother and Queen walked past him.

But it then appears that the Queen says something to her third eldest grandson.

While Prince William’s colleagues remain solemn and stern, the heir to the throne’s composure cracks.

Although he tries to contain himself, a clear smile is etched over his face as he comes face to face with his “Grannie”.

Another cadet, who walks behind the Queen, appears to smile too — clearly, Her Majesty’s wit had come out. 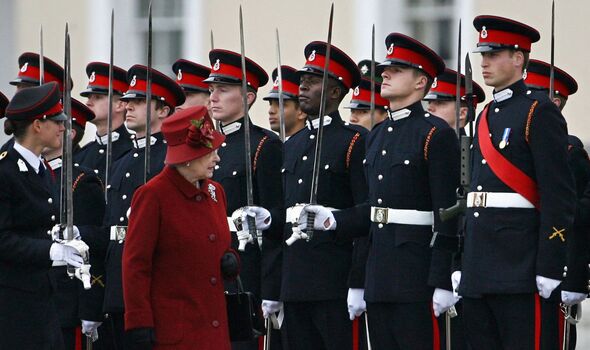 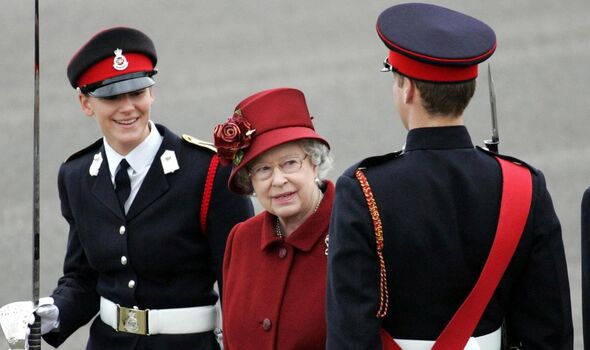 The Queen, wearing in a deep red dress and matching hat adorned with a rose, continues to make her way past the line of cadets with a grin on her face.

Meanwhile, Prince William continues to smile, his cheeks blushing slightly, as he attempts to regain his composure.

The other cadets’ stern faces make Prince William’s stick out like a sore thumb, but while also reinforcing that it was a joke shared only between grandmother and grandson.

Eventually, Prince William manages to get a hold of himself and resumes the serious expression shared by his counterparts.

After he completed his time at Sandhurst, Prince William became a 2nd lieutenant and joined the Household Cavalry’s Blues and Royals regiment, and was later deployed to the RAF.

DON’T MISS: Tragedy as ‘wonderful’ dad drowns in pond in his back garden [INSIGHT]
Harry made ‘hand flick’ gesture at William during tense funeral moment [ANALYSIS]
Boy, 15, dies after ‘being held down and repeatedly stabbed’ [REPORT] 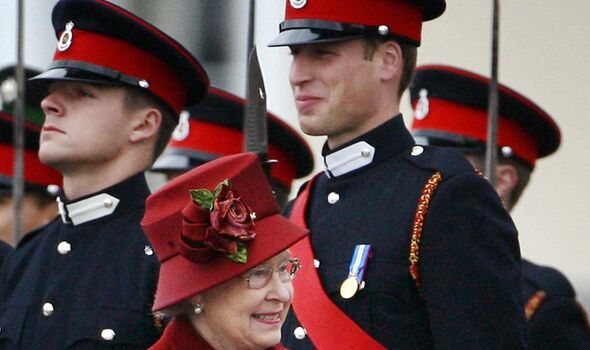 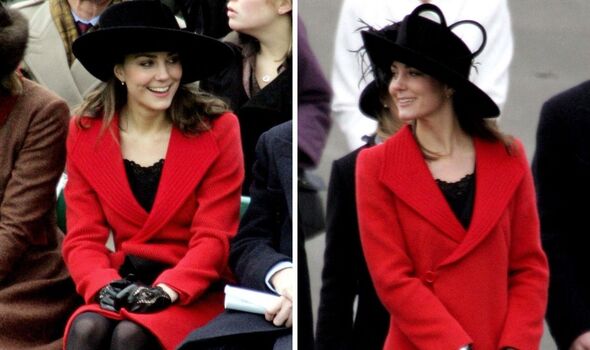 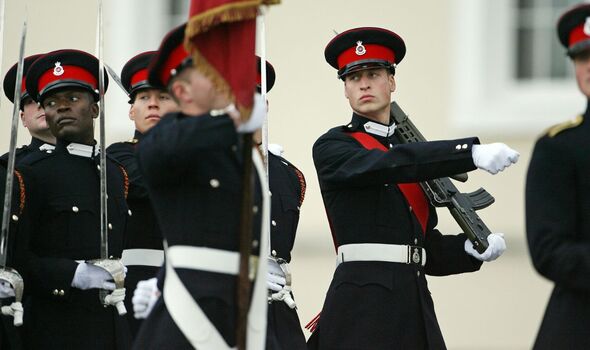 As heir apparent, the Queen and Prince William became “very close” over the years with the late Monarch spending a lot of time teaching her grandson the royal lessons she imparted to King Charles III, royal correspondent Melanie Bromley claimed.

Evidently from Prince Williams’ statement not only did he learn from Britain’s longest raining monarch but Kate, the Princess of Wales, did too.

Prince William wrote: “I have had the benefit of The Queen’s wisdom and reassurance into my fifth decade.

“My wife has had twenty years of her guidance and support. My three children have got to spend holidays with her and create memories that will last their whole lives. She was by my side at my happiest moments. And she was by my side during the saddest days of my life…

“I thank her for the kindness she showed my family and me. And I thank her on behalf of my generation for providing an example of service and dignity in public life that was from a different age, but always relevant to us all.”