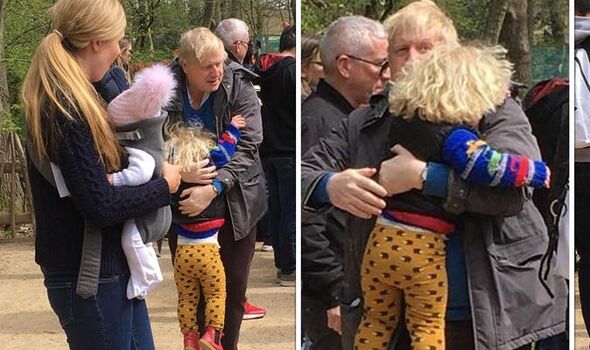 Two days after walking the streets of Kyiv with Volodymyr Zelensky, Boris Johnson was back on daddy duties in Hertfordshire today. As these exclusive pictures reveal the PM hand his hands full carrying his one-year-old son Wilfred.

Carrie held baby Romy Iris Charlotte close in a carrier with the tot protected from the spring chill by a pink bobble hat.

The Johnsons enjoyed a day out at Paradise Wildlife Park in Hertfordshire.

In one photo, Mr Johnson, was pictured holding Wilfred, who like his father has a shock of curly blond hair, in the park’s World of Dinosaurs exhibition.

A member of the public said the Johnsons had arrived without any fanfare, albeit with a security detail in the background.

They added: “They just looked like any other family really – everyone was ignoring them in the main.”

The wildlife park visit came before Mr Johnson heads to Chequers for an Easter break.

Downing Street said he would be spending the week at the official retreat, with a view to having “a bit of a break” for a couple of days.

A No 10 spokeswoman said the intention is for the Prime Minister to “get some rest and spend some time with family”.

The happy snaps contrasted with the serious business of Mr Johnson walking alongside President Volodymyr Zelensky on the streets of Kyiv at the weekend.

During his flying visit, the PM pledged more UK weapons to bolster Ukraine in its fight against Russia, which invaded on February 24.

In a statement issued on Sunday, Mr Johnson praised Mr Zelensky’s “resolute leadership and the invincible heroism and courage of the Ukrainian people”.

He added: “We are stepping up our own military and economic support and convening a global alliance to bring this tragedy to an end, and ensure Ukraine survives and thrives as a free and sovereign nation.”