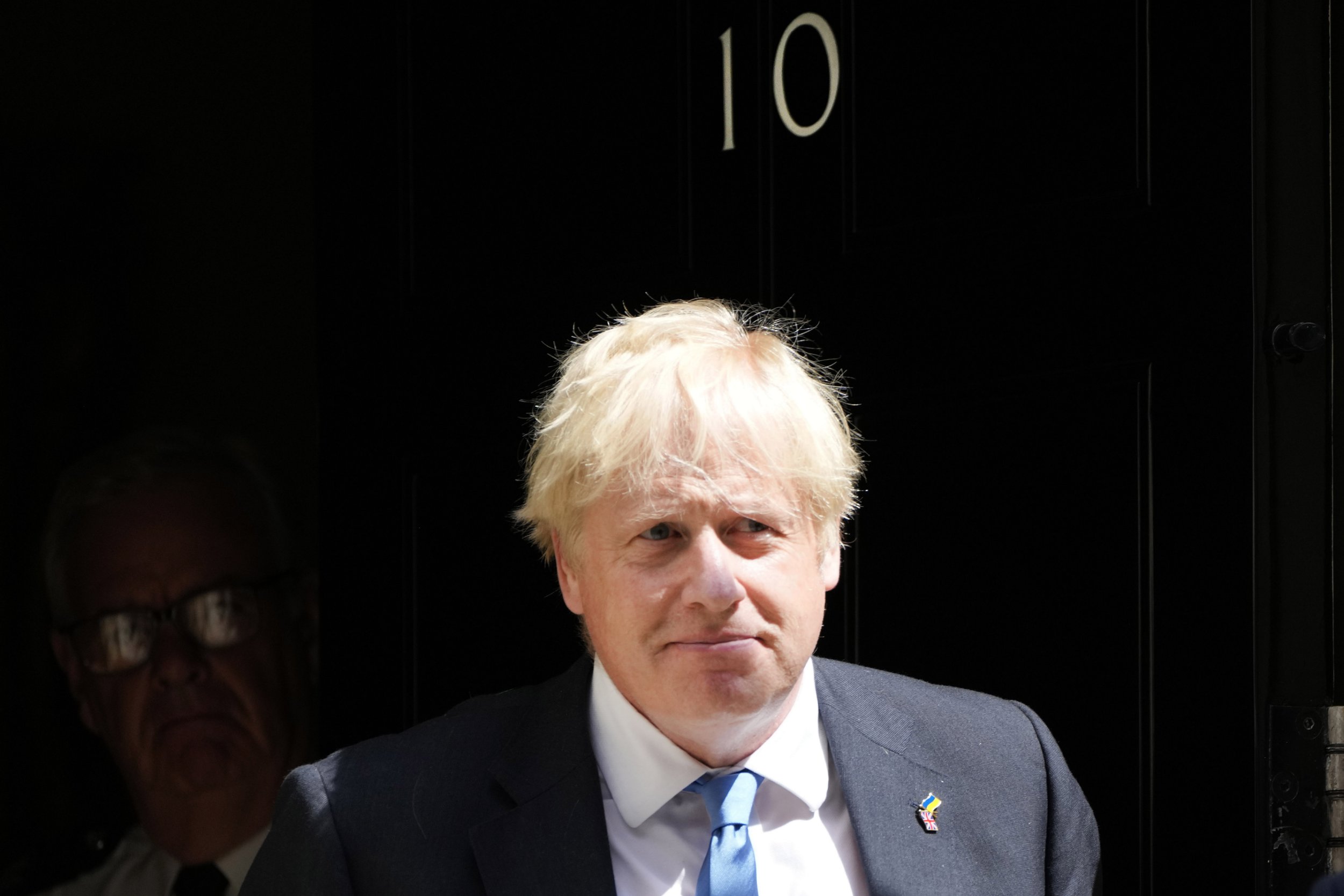 Boris Johnson is bidding farewell to Number 10 and will soon see the Queen to formally tender his resignation.

The outgoing prime minister’s address to the country was brought forward to an earlier time as thunderstorms are forecast to hit London this morning.

After three years and 44 days, he stepped out into Downing Street to mark the end of a chaotic and scandal-hit premiership – fittingly, quite literally under a cloud.

He said: ‘Well, this is it, folks. Thank you everybody for coming out so early this morning.

‘In only a couple of hours I will be in Balmoral to see Her Majesty the Queen and the torch will finally be passed to a new Conservative leader.

‘The baton will be handed over in what has unexpectedly turned out to be a relay race – they changed the rules halfway through, but never mind that now.’

The song is a remix of ‘Bye Bye Baby’ which anti-Brexit campaigner Steve Bray and his supporters often play during protests. Others could be heard shouting from Whitehall.

The prime minister announced his intentions to step down in July after a wave of government resignations but remained in place while the Conservative Party chose a new leader over the summer.

Confirmation of Liz Truss’ victory yesterday means he will now step aside, with his successor’s place in Number 10 set to be confirmed by the monarch later today.

His divisive period in office was set against the backdrop of two generational challenges: the Covid-19 pandemic and war in Ukraine.

Mr Johnson departs role as the country prepares to be hit by the worst of the cost of living crisis fuelled by those two events.

Despite electoral success and winning plaudits for the speed of vaccine rollout and tough stance on Vladimir Putin’s illegal war, his government was never far from chaos.

He survived a police fine for breaking his own Covid-19 law but it eventually came crashing down after it emerged he knowingly appointed an MP to a position responsible for party discipline who had been accused of sexual assault.

Over an astonishing few days, all but the very loyalest ministers quit and he eventually succumbed to the pressure, telling the country: ‘Them’s the breaks.’

Speculation about what Mr Johnson plans to do next is rife and an attempt at a political comeback can’t be ruled out.

Shortly after he announced he would stand down, a close ally revealed he intends to remain in parliament – but, given Labour’s gathering strength in his seat of Uxbridge and South Ruislip, it’s possible he could be voted out of the Commons at the next election.

He may also face a suspension and be left open to a by-election if an ongoing investigation finds he misled parliament over law-breaking in Downing Street during the Covid-19 pandemic.

Ms Truss faces an immediate headache over whether to scrap the Privileges Committee probe altogether as either move opens the party up to more sleaze accusations.

The prospect of suspension clearly has Mr Johnson worried: it emerged this week that Downing Street commissioned a QC to produce a legal opinion which called the process ‘unfair’ and ‘fundamentally flawed’.

Labour MP Chris Bryant, who is chair of the committee but has recused himself from the investigation, described the highly unusual intervention as a ‘glorified press release’ and accused Mr Johnson of ‘disgraceful bullying’.

After Mr Johnson’s speech, all eyes are on Ms Truss and her meeting with the Queen at Balmoral, where the 96-year-old monarch has opted to receive the new PM rather than risk aggravating recurring mobility issues by traveling to London.

Ms Truss is expected to address the country later today, when she will be under pressure to give an indication of what actions she intends to take to help ease the cost of living crisis this winter.

Senior appointments are likely to follow throughout the day, with her new cabinet due to meet for the first time tomorrow.

Boris Johnson: The rise, the reign and the fall

Not too long ago, the prime minister was said to be eyeing a decade in power. Now, the party is over.

He has been in Number 10 for little more than three years, longer than both Theresa May and Gordon Brown but not by much.

Mr Johnson masterminded a political rise that upended British politics in its wake but it all ended in tears, just like his critics always said it would.

He had already been an MP in a safe Tory seat for seven years and a public figure when he decisively proved he may possess some form of political alchemy.

A run to be London mayor in 2008 saw him defy the odds and he pulled off the same trick again in 2012, securing a majority after two rounds on both occasions. To put that into context, no Tory candidate has managed to get more than 45% of the vote since.

Mr Johnson denied having ambitions to be prime minister when he returned to parliament in 2015 but the ill-suited role of retiring backbencher would not last long.

After months of speculation, he announced he would fight against his old friend David Cameron in the referendum on European Union membership.

He became a leading light in the campaign, helping to change the course of British history in the process.

But just when he seemed destined for Downing Street, he bungled the subsequent leadership election, opening the door to Theresa May.

After a little under two years as her foreign secretary, he resigned and became a chief agitator against the prime minister and her Brexit deal.

In the leadership election that followed her resignation, he swept away all before him with his pro-hard Brexit mantra, taking the same message to the country in December 2019.

Backed by the same machine that helped win the referendum – most notably, chief aide Dominic Cummings – he defied political expectations to win a decisive majority.

But despite achieving his primary goal of leaving the EU and initially flying high in the polls, his premiership has been dogged by controversy.

There had been significant discontent within his own party over a range of issues, including the decision to raise taxes, the imposition of lockdown and his badly botched attempts to save a Tory MP who had lobbied the government on behalf of paid clients

He himself has faced major sleaze investigations, the first over who paid for a Caribbean holiday and the second over who financed the lavish refurbishment of the Downing Street flat, and he has seen two independent ethics advisors quit in protest.

Revelations about parties that took place in Downing Street in contravention of his own Covid laws and his Met Police fine pushed some Tory MPs over the edge but it was the Chris Pincher affair that proved fatal.

His time in Number 10 was supposed to be all about Brexit and ‘levelling up’ but instead became dominated by Covid-19 and latterly the cost of living crisis and war in Ukraine.

Mr Johnson defiantly resisted the political pressure until the bitter end but the man once thought to have a political Midas touch will go down in history as a prime minister who won the war but lost the peace.