The former Tory leader told Channel 4 News “parliament can’t pass a law to force a government to accept an extension”, thereby refuting the idea that a no deal will inevitably be blocked. Speaking to Channel 4 reporter Krishnan Guru-Murthy ahead of the BBC Tory leadership debate, Mr Duncan Smith said: “Boris Johnson is clear – leave on 31st come what may.” But Mr Guru-Murthy shot back: “Except you can’t necessarily, can you?

“Parliament can stop you is what I’m saying.”

But the Tory Brexiteer was having none of it, replying unequivocally: “It’s completely in his gift.

“We are still a member of the EU. 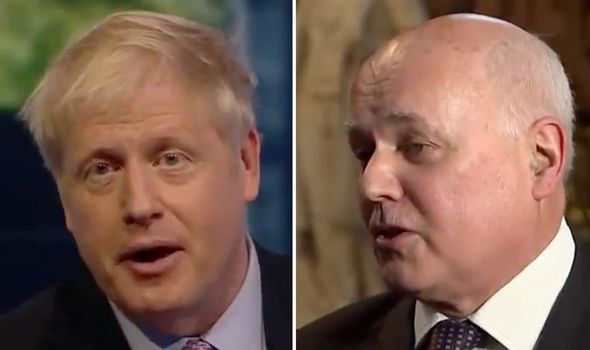 “Article 50 is very clear that unless we ask for and accept an extension, on the 31st we leave.”

But the TV reporter volunteered: “But parliament might do that.”

His subject snapped back: “Parliament can’t pass a law to force a government to accept an extension.

“Parliament, as you saw a few days ago, decided that it was not going to block us leaving on the 31st.”

In disbelief, Mr Guru-Murthy asked: “Are you really saying that if parliament votes definitively against no deal in the last week of October, Boris Johnson would just ignore it?”

Running out of patience, the Tory MP replied: “I just must tell you this very simply.

“You can play hypothetical games – the reality is we are down under Article 50 to leave on October 31.

“You can make all sorts of assumptions but there is only one candidate who has made that clear pledge who is still standing and thats Boris Johnson.

With four of the five candidates willing to accept a no-deal Brexit, Rory Stewart was the only one to rule it out entirely.

Insisting it would not be possible to negotiate a new deal by October 31, Mr Stewart said the existing Withdrawal Agreement was the only way out of the EU.

Flagging up how all the candidates had voted for Theresa May’s deal, he called on them to do so again, saying “let’s get on with it, let’s vote it through, let’s get it done”.

Ruling out no-deal Brexit entirely, he said: “In the end we’re in a room with a door, and the door is called Parliament, and I am the only person here trying to find the key to the door.

“Everybody else is staring at the wall shouting ‘Believe in Britain’.”

Kate, Duchess of Cambridge, and Prince William were believed to have been shocked when Prince Harry and Meghan, Duchess of Sussex, revealed their intention to…