Boris Johnson has condemned the racist abuse aimed at England’s footballers during the match against Hungary.

Monkey chants were directed at Raheem Sterling and Jude Bellingham by members of the crowd at the stadium in Budapest on Thursday night.

In a tweet, the prime minister said: “It is completely unacceptable that @England players were racially abused in Hungary last night.

“I urge @FIFAcom to take strong action against those responsible to ensure that this kind of disgraceful behaviour is eradicated from the game for good.”

Mr Johnson was criticised earlier this year for hosting Hungarian leader Viktor Orban, who has referred to refugees as “Muslim invaders”.

Hungary were ordered by European football body UEFA to play two games behind closed doors, following the behaviour of fans at Euro 2020, which was held this year.

However, the sanction did not extend to World Cup qualifiers, like the game against England.

The next game to be affected by the ban will be the UEFA Nations League next year. In a statement, FIFA said “adequate” action would be taken.

It said: “First and foremost, Fifa strongly rejects any form of racism and violence and has a very clear zero-tolerance stance for such behaviour in football.

Speaking from the stadium, Sky Sports News reporter Rob Dorsett said he heard “sporadic monkey chants from various areas of the crowd” at the Puskas Arena in Budapest.

They were “primarily towards Raheem Sterling when he touched the ball”, Dorsett added.

He said: “I have seen four separate individuals specifically involved in the racist chanting. The most recent of those was directed at Jude Bellingham, as he warmed up right in front of us, and close to the Hungarian ultras. 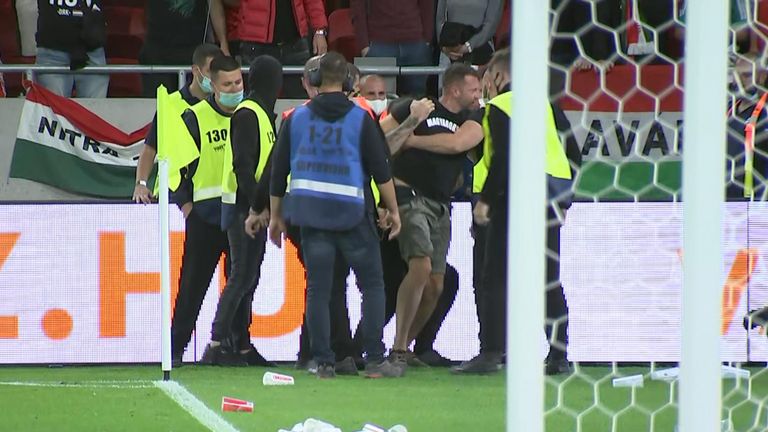 “They have been sporadic pockets of racist abuse we have seen, but they are nonetheless clear.”

Sterling, who scored England’s first goal, was “pelted by cups thrown from the crowd” while celebrating, and a BBC reporter also said she saw abuse directed at 18-year-old Bellingham while he warmed up.

In a statement, the Football Association said: “It is extremely disappointing to hear reports of discriminatory actions towards some of our England players.

“We will be asking FIFA to investigate the matter.

“We continue to support the players and staff in our collective determination to highlight and tackle discrimination in all its forms.”

Subscribe to the All Out Politics podcast on Apple Podcasts, Google Podcasts or Spotify.

Speaking following the game, England manager Gareth Southgate said: “”[FIFA] have taken this fixture really seriously, they’re taking accounts on everything. I’m not really across all of the process of that [whether the FA would make a complaint]. I’m sure [FIFA] will gather evidence from different sources.”

England players were targeted with racist abuse from the UK following their loss to Italy in the finals of the Euros.