The Prime Minister will hold a press conference alongside England’s chief medical officer Professor Chris Whitty and chief scientific adviser Sir Patrick Vallance. Number 10 has confirmed the speech from inside Downing Street will take place at 4pm. This afternoon, the Prime Minister will chair an emergency cabinet meeting following widespread reports a second lockdown could be confirmed within days. 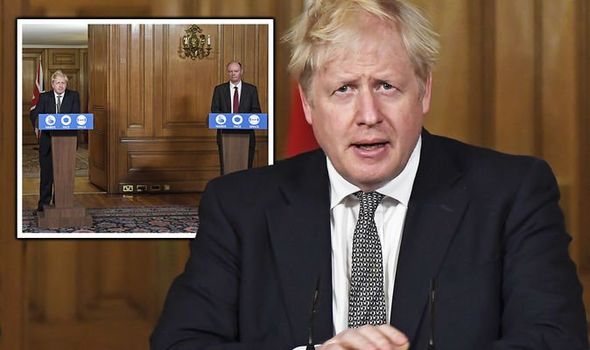 It is thought a return to draconian restrictions seen in March and April, with all non-essential shops closing, could be enforced as early as next week.

The measures could last for a whole month – with nurseries, schools and universities remaining open.

Mr Johnson has previously resisted pressure to introduce tougher measures and has favoured a localised tier system to try and suppress the virus.

The Government’s Scientific Advisory Group for Emergencies (Sage) had put forward a two-week circuit-break lockdown in September – but this was not implemented by Number 10.

But, a dramatic policy shift may have been triggered after alarming data on Friday afternoon suggested more than half a million people were infected with the virus in the week ending October 23.