French fishermen had staged a protest, setting off flares as dozens of boats ­gathered at the island. Some even entered St Helier’s harbour before retreating to nearby Elizabeth Castle as two Royal Navy warships moved in. The Prime Minister ordered HMS Tamar and HMS Severn to Jersey on Wednesday night amid fears a fleet of French fishing boats would form a blockade at St Helier.

But the two ships were ordered home last night after the French vessels abandoned their protest just after lunchtime yesterday. The row saw Paris threaten to cut off power to the island, which receives 95 percent of its electricity from France through three undersea cables.

But defiant French fishermen have vowed to return. One crewman, known as Popeye, said: “We will go back, and next time it will be war.”

David Sellam, the head of the Normandy-Brittany Sea Authority, said: “We’re ready for war. We can bring Jersey to its knees if necessary.”

Furious British politicians blasted Paris for the latest episode in a series of anti-Brexit tantrums. 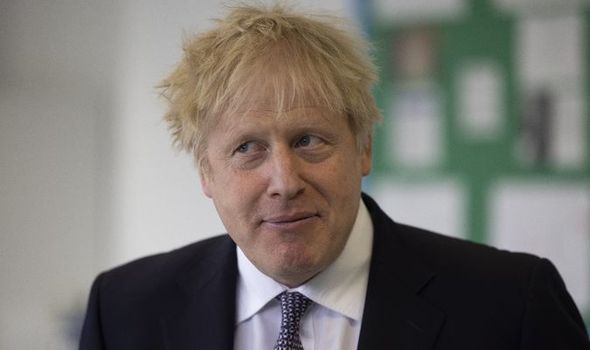 “They could almost fish anywhere they pleased. I think we should have taken much more control of our fishing. This shows how much they were used to.

“Britain leaving the EU has left them with a lack of money and a lack of pride and you can see that by the way they cannot organise anything. They are incredibly slow and bureaucratic and this has exposed all of that.” The senior Brexiteer said of France and the EU: “They are vindictive. It will go on. They are arrogant.

“They don’t believe anyone should leave the EU and they are furious we have left. And now they won’t let anyone else do it.

“The latest export figures show our exports are up, while exports in France are falling. For all this posturing, they are the ones who are suffering.”

“The fact the French government is prepared to behave like this vindicates our leaving the European Union.”

France has accused the UK of using red tape to limit fishing around Jersey, in breach of the Brexit agreement made with the EU last year.

The PM pledged his “unequivocal support” to the Island.

A Downing Street spokesman said: “The Chief Minister updated the Prime Minister on the latest developments with French fishing vessels around Jersey’s coast.

“The PM reiterated his unequivocal support for Jersey and confirmed that the two Royal Navy offshore patrol vessels would remain in place to monitor the situation as a precautionary measure. They agreed to stay in touch as the situation develops.”

Mr Johnson had ordered gunships HMS Severn and HMS Tamar to be deployed to Jersey to defend the island following the threat of a French blockade.

The ships could be seen patrolling nearby as the French fishermen protested against the British and Jersey governments.

The two British warships are armed with a 20mm cannon, which can fire 700 rounds a minute at a range of 1,300 yards.

France President Emmanuel Macron responded by sending in the Athos and FS Themis, but they stopped short of entering British waters. 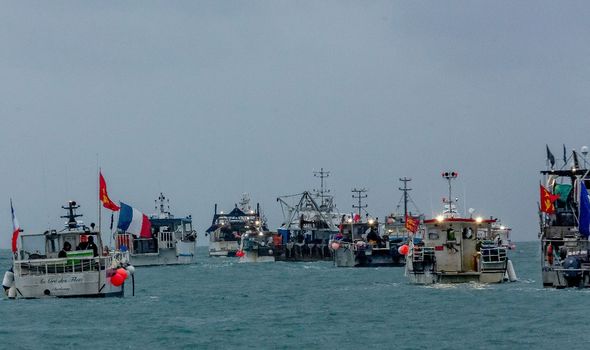 A Government spokeswoman said: “We are pleased that French fishing boats have now left the vicinity of Jersey.

“Given the situation is resolved for now, the Royal Navy vessels will prepare to return to port in the UK. We remain on standby to provide any further assistance Jersey requests. Jersey authorities have a right to regulate fisheries in their waters and we support them.”

Some French fishermen claimed Jersey had been taken over by an “extremist fringe” who want to reduce French fishing access and profit from Brexit.

Lord West, former head of the Royal Navy, said: “You can’t allow the vessels of another country to blockade one of our ports. If they actually did block it, then we would have to do something to unblock it.

Jersey fisherman Josh Dearing described the scenes as “like an invasion”. He added: “We’re completely unprotected in Jersey. We’ve got nothing except for a few police officers. The French can be hostile.”

French fishermen have a track record of this kind of blockade but more often than not it is directed at their own government.

But now they are targeting our own waters with their blockade of Jersey.

Sending in HMS Severn and HMS Tamar is in part a political move, a symbol of Britain’s determination to protect its waters and to send a strong diplomatic message to France’s President Emmanuel Macron as well as the fishermen.

But the two patrol ships can also take action. They can board any fishing boat to check they are observing regulations, that the mesh-size of their nets is not so small that young fish cannot escape or that they are keeping out of protected areas.

The boarding parties might go out in an inflatable but they normally need the assistance, or at least the acquiescence, of the fishing boat to do this. 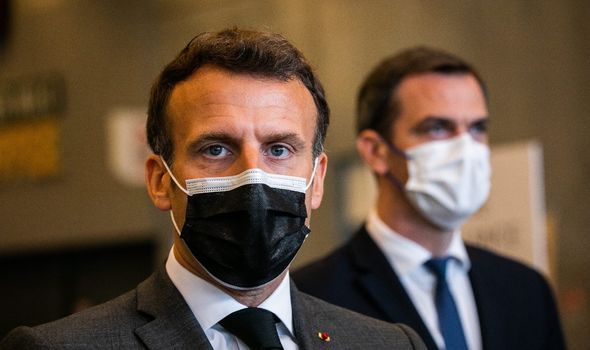 If the boat does not want to cooperate, you could deploy a helicopter with Marines roping down on to the deck.

But it could go wrong. One boarding party boarded a French fishing boat which promptly set off at speed back to France with the RN personnel onboard.

Unfortunately, the post-Brexit fishery deal has not so far produced a stable and working fishery arrangement, and the fishermen of all the nations, including our own, have been disadvantaged.

The custom of European fishing vessels, including Britain’s, operating in other nations’ waters is mired in history for well over a century and has allowed reasonable access to everyone’s advantage.

This has included allowing some French vessels to fish in Jersey’s waters. Our own fishermen have enjoyed reciprocal rights.

The present position needs early resolution by negotiation before it escalates further and serious personal and political injury is caused, perhaps spreading to other EU nations and other common issues.

In any treaty, whether it be marriage or an international one, neither party can have everything it wants. Mutually acceptable compromise is the only route to a stable and mutually beneficial situation. 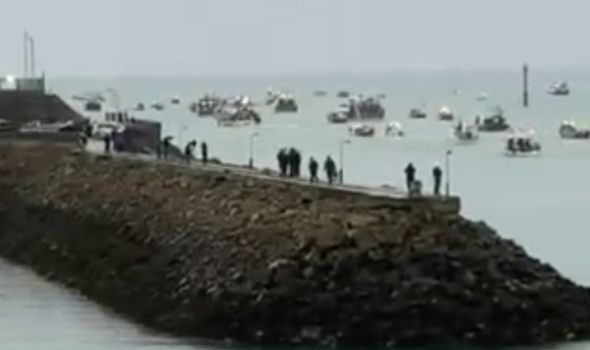 This may explain why President Emmanuel Macron is sanctioning extremely provocative action in France’s dispute with Britain over English Channel fishing rights.

His government has threatened to cut electricity to the island of Jersey – a British Crown Territory – in retaliation for a reduction in the ability of French boats to work in local waters after the Brexit deal.

There was a fierce face-off, as around 100 French boats also attempted to blockade the port while ramming their British counterparts.

“We are ready for war!” the French fishermen shouted, while foolishly referring to “another Battle of Trafalgar”.

Their fishing industry is not huge – it accounts for 65,000 jobs including 23,000 fishermen – but it has been hugely reliant on British waters for the past 50 years. This all changed after Brexit, when new measures were introduced, limiting French rights.

Macron’s administration, supported by the European Commission, has accused Jersey of acting illegally by not granting licences to all the French who want one.

It comes as France slowly emerges out of its coronavirus pandemic while standing up to huge economic and social problems.

There are also plenty of people calling for “Frexit” (France leaving the EU) and supporting the far-Right leader Marine Le Pen. Despite dark roots in racism, her National Rally party is renowned for its patriotism and Macron has moved further to the right in a bid to win over such voters.

No doubt a maritime victory against the British could help him enormously. 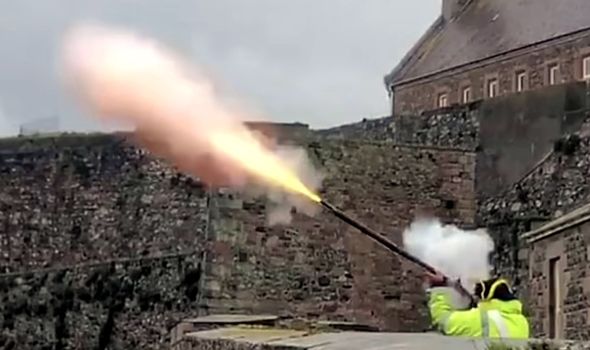 HMS Severn and Tamar perform one of the most unsung and least glamorous roles of the Royal Navy – fishery protection.

And a few years ago in the English Channel I witnessed first hand how its tight-knit crew, then commanded by skipper Rex Cox, continued the Navy’s oldest role.

HMS Severn is a world removed from a major warship – compact and modern and a springboard for the crew’s daily mission to ensure only those who are allowed to fish in our waters cast their nets.

They also check that fishermen are taking only what they are allowed to catch and not exceeding quotas or catching underage fish which means stocks risk being depleted. Doing this is arguably one of the smelliest tasks in the Navy.

Getting aboard was always an experience. Climbing up a rope ladder flung over the side as the fishing boat is rolling is challenging.

At one point the wind caught me and the ladder and it felt as if I was flying like a flag until the gust subsided and I dropped back down. On another occasion, a Belgian skipper clearly did not want us aboard.

There was no ladder for us to climb aboard, so we pulled up alongside and had to use the sides of the RIB as a trampoline to bounce up and on to the deck.

Once aboard the team had to descend into the bowels of the vessel to go through the catch box by box and to check the nets to make sure the mesh was not so fine that underage fish would be caught.

On some vessels it was easy. On one we had to descend through a long narrow entrance barely wide enough for a burly rating. If the fishing boat had capsized there would have been no escape.

This vital work goes on out of sight, with little prospect of medals or glory, to protect our fishing stocks.

The team is small and they all rely on each other. There is no room for passengers – apart from when the press are on board.